The Man Who Sold America: The Amazing (but True!) Story of Albert D. Lasker and the Creation of the Advertising Century 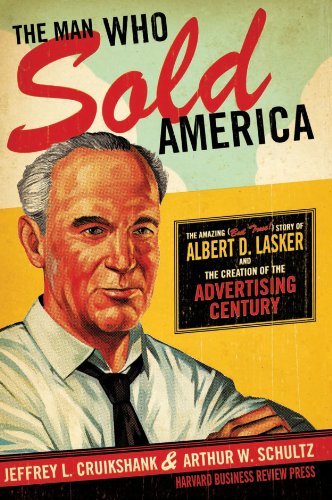 Consider these words, penned by a man who helped shape one of the most prosperous eras in American business history:

“I know how to put on an act . . . to get them to appraise a situation. But if the purpose to which I had dedicated myself has failed, so to me the thing was a complete failure.”

Such doubts, expressed in 1938, came from the founder of modern advertising, Albert Lasker. As Jeffrey Cruikshank and Arthur Schultz tell it in The Man Who Sold America, Lasker by this time was wealthy, connected, and accomplished, an advisor to presidents, a sports magnate, and owner of the one the biggest ad agencies in America.

He was also a Southwesterner, German, and Jewish—in many respects the ultimate outsider. But these factors, with the added burden of lifelong mental disease (probably bi-polar disorder), produced one of the canniest salesmen the nation has ever known.

Working with the legendary ad copywriter John Kennedy, Lasker laid the groundwork for “reason-why” advertising. Until then, advertisers simply told consumers about their products’ attributes—the viewpoint of the producer. Lasker realized ads had to sell, providing people with a compelling reason to buy a particular product or service.

Lasker’s other great contribution to the field was his use of research to test and validate various advertising approaches. Systematically tracking the impact of his ads, Lasker tweaked and revised them and then tested their impact again.

As Cruikshank and Schultz note, Lasker invented a particular kind of ad agency for his time: one that delivered high service to a relatively small number of key accounts. Far from simply being a producer of catchy slogans, jingles, and graphics, he formed personal relationships with the heads of client firms. Well before a Booz Allen or a McKinsey entered the scene, Lasker was providing strategic business counsel to firms as early as the 1930s.

Lasker’s luck was to be present when U.S. corporations were “scaling”—developing the production, distribution, and financial systems necessary to serve national consumer demand—but lacking the wherewithal to communicate with the marketplace.
The era demanded more sophisticated media delivered with the common touch. Thus,
Kotex, Kleenex, Pepsodent, Frigidaire, Palmolive Soap—all untested products at the outset—were turned into national brands by Lasker.

His other rabbit’s foot came from the commensalistic or symbiotic nature of advertising, which draws unabashedly from all media and arts to get a message across. As printing technology developed, so did graphical representation in newspapers, magazines and the penultimate commercial canvas, the billboard.

When advertisers discovered the electron, Lasker’s company, Lord & Thomas, taught Americans to tune into the radio for soap operas and variety shows. The devil’s bargain, of course, was that we would tolerate the ads that supported these entertainments, thereby forming the basis of “free” radio, television, and Internet entertainment.

But for Lasker and those around him, such accomplishments came at a cost. His manic drive produced periodic breakdowns, forcing him to withdraw from the world for weeks, sometimes months, on end.

For subordinates, the Lasker roller coaster was an exhausting, dizzying experience. When the head of his New York office complained of feeling inferior in the great man’s presence, Lasker corrected him. “You feel inadequate, not inferior. That is part of my management style. I want you to feel inadequate.”

Lasker himself became advertising’s Cincinnatus, closing his company in 1942 and selling its assets to the firm that would become Foote, Cone and Belding. Although the industry has revered pioneers like David Ogilvy and Leo Burnett, it has been cooler to the legacy of Lasker, who was happy to walk away from advertising. After his re-entry into public life, he became one of the nation’s great philanthropists, establishing the Lasker Foundation to support medical research and persuading Congress to create the National Institutes of Health.

By giving us Lasker, warts and all, Cruikshank and Schultz have done something peculiar and a little grand, providing us another chapter in the American saga of winning and losing—which, along with race, is our ten-ton national narrative.

The latest installment of that tale is contained in the ranks of nine million officially (many more, unofficially) unemployed Americans. Particularly for those whom work is bound up with identity, relationships and the very structure of life, the feeling that this may be it is overwhelming.

In a different context, such pain infused Lasker even as he sat atop competitive capitalism’s ladder. Society deemed him a winner; Lasker believed he was a loser. Perhaps his bipolar disorder fueled such a self-assessment.

Or, maybe, he knew something that many CEOs learn too late.