The Man Who Shot Out My Eye Is Dead: Stories 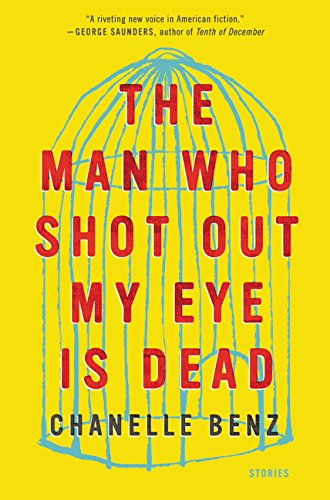 “there is a good deal to get excited about in pondering the future work of Chanelle Benz.”

Anyone who has watched even one episode of House Hunters over the last few years has borne witness to at least a few of the “established facts” of home décor, as put forth by HGTV:

—That a particularly dour shade of gray has been announced as the “new neutral” and should be used on all the walls—interior and exterior—of the home,

—That granite, even the ugliest, cheapest cuts of granite, is an essential kitchen component,

—That even a covering of stainless steel the weight and depth of aluminum foil elevates a kitchen appliance to “professional level,”

—That every closet must be “walk in,”

—And that “man caves” are the must-have rumpus rooms of the new millennium.

These “rules,” put forth perhaps by the same decorators and designers who, a few years ago, insisted that all walls be lavender, have resulted in both the dumbing down and the ugly-ing up of the American home.

In much the same way, the teachers of MFA programs—those cash cows of American universities that sell the notion that every graduate can be a novelist and/or memoirist of great repute—have given their pupils the notion that by following the precepts of their program, they, too can be an Hemingway or a Fitzgerald, or, at the very least, an Updike.

The result of these programs is that any number of obscure literary Internet journals with vacuous names belying their vengeful purposes (with older, bitter graduates of similar programs taking their revenge on the hopeful young) flooding the rather small global literary market with short stories written primarily by the recent graduates of these writing programs, all tinted in that same dour House Hunters’ gray, and all festooned with any number of MFA learned literary tics.

Such is the case with “West of Known,” the first of the stories collected under the title The Man Who Shot Out My Eye Is Dead by Chanelle Benz.

In it, Ms. Benz proves that she has indeed earned herself an MFA by her refusal, in this particular story, to bother with quotation marks, something that the kids today apparently find quite compelling. Me, I just find it confusing. And in a story that has barely held my interest from the first word onward, it is the speed bump on the road of my reading that makes me yearn to simply move on to the next story, or, perhaps, better still, simply close the book.

Which would be a shame, as our author proves, in more than one story that still lies ahead, that hers is an authorial voice to be reckoned with and that this collection mixes gold among the pyrite.

Back to “West of the Known,” and this eternal question: Is the refusal to use quotation marks (or even italics, as the kids all did a decade ago) the ugly granite of those conditioned by their MFA programming, or is it, instead, the thin coating of stainless steel that makes things so shiny but lets the fingerprints show?

And when we come across this:

I couldn’t not go. Uncle Bill and Aunt Josie saw me fed but were never cherishing. I did not dread them as I did their son, Cy.

What comes in the dark?

What, in a story in which folks talk all folksy without warning or emphasis, are we to make of this? A conversation? A Greek chorus? An internal monologue.

Those who answered “internal monologue” come the closest to being right. And it is a lovely little interlude, even if, in slowing the readers eye in a brief WTF moment, I am not sure that it works to the good of the story.

But it underscores a fact that should have been taught well before a Master’s level program: that a writer’s literary tics ought not to be impediments to a reader’s enjoyment of a story.

Things get better—and worse—as the stories go along.

In reading the full collection, the reader gets the idea that the author is trying on costumes, stage-y accents, and wigs of all colors as she develops her stories. We get voices of various ages, genders and races, which is all to the good, except that, like her various tics—broken narratives, shot grammar and sentences that are shaped like overcooked noodles—these come at the expense of the story.

Given that Ms. Benz is a writer of some talent, the reader tries to cheer her on, but, in the end, wishes that she would work more simply and, instead of apparently working with the goal of reshaping the art of fiction, would instead simply attempt to write a damned good short story.

Which, collected just after a painfully sturm und drang-ed thing called “The Peculiar Narrative,” she does in her story “James III.”

This is a simple story: a young man in an abusive home situation makes the choice to survive his circumstances. It is beautifully structured, masterfully told, and totally lacking in the artifice and the self-aggrandizement that curdles much of the rest of the works collected here. In short, it is a beautiful thing and it shows that there is a good deal to get excited about in pondering the future work of Chanelle Benz.

Hers is, at this moment, a very young voice. But it is also a distinctive one. Benz writes in her own peculiar rhythms and the worlds she creates are filled with both unsettling and wonderful details. When she attains control over the language of her work and lets those tics that would too easily define her as an author drop away, she will most assuredly be someone worth watching.