The Man Who Played with Fire: Stieg Larsson's Lost Files and the Hunt for an Assassin 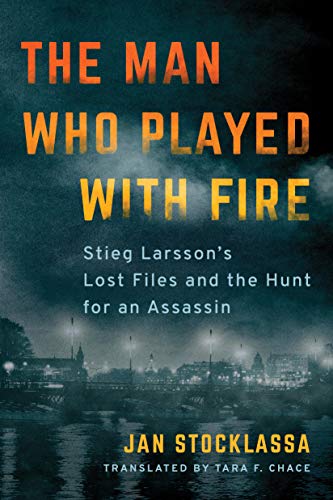 The Man Who Played with Fire is up front about using author Stieg Larsson’s name and research to help solve the 1986 assassination of Swedish Prime Minister Olof Palme who was gunned down in Stockholm while out walking with his wife after the two took in a film.

Larsson of course is the author of The Girl with the Dragon Tattoo trilogy. Before that, he was a respected journalist and researcher in Sweden. There is a lot of folklore built up around him, not least of all because he died far too young just prior to his trilogy being published.

Olof Palme is another Swede who has seemingly grown larger in death than in life. He was a left-wing politician who antagonized the rising alt right movement in Sweden which was being tracked obsessively by Larsson. Larsson worked so hard—and ignored his health so much—while trying to solve Palme’s murder and tracking the alt right movement that he seemingly worked himself to death.

Connecting Larsson to Palme and marketing a book this way is the equivalent of spinning gold out of yarn. In this case, the yarn are Larsson’s never-examined files on the Palme murder. This was the genius of author Jan Stocklassa who took a legitimate interest in solving the Palme murder and then discovered that Larsson also had been obsessed with it.

One can feel Stocklassa’s excitement when he was given access to Larsson’s storage unit filled with boxes of material on the Palme murder. He liberally quotes memos and correspondence throughout the book so that the reader is nearly reading Larsson’s mind. Just the idea of it is compelling.

So far, so good. The reader salivates as the doors swing open to Larsson’s treasures and the audacious idea that this beloved dead writer might solve one of Sweden’s most infamous murders.

But then the book hits a snag. One can hardly blame Stocklassa for being too thorough—after all, the casual reader does need to be brought up to speed on who Palme was and why his assassination was important—but do we really need to know every far-flung theory the police chased down?

One must slog through the middle of this nearly 500-page book filled Swedish names that are difficult to remember and even harder to pronounce. The whole thing feels like chemistry homework and is hard to follow even if you’re invested in the book’s thesis.

One gets the feeling that this book could have been 200 pages shorter and when it comes to the writing, it must be said that Stocklassa is no Larsson.

The good news is that much of this can be skimmed or skipped to reach the heart of the matter—who Larsson believes killed Palme. When Stocklassa begins following Larsson’s working theory and adding his own undercover investigation, this book does begin to read like one of the Dragon Tattoo trilogies.

Stocklassa even has his own Lisbeth Salander, a daredevil woman who agrees to wear an array of audio and video recorders to capture the man Stocklassa believes is likely Palme’s killer. Stocklassa gives him a pseudonym in the book and in the end, believes this person is in possession of the gun that killed Palme.

Fascinating stuff but, as of this writing, the Swedish police authorities continue to investigate even though they’ve had Stocklassa’s book for about a year now. The jury is out.