The Man Who Invented Motion Pictures: A True Tale of Obsession, Murder, and the Movies 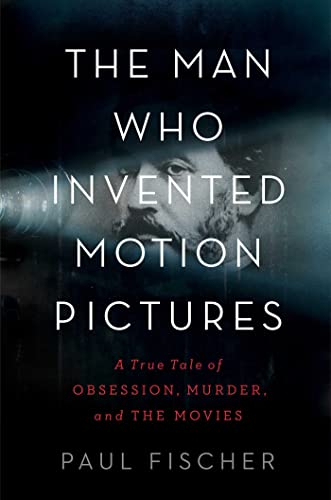 Did Thomas Edison really invent the motion picture camera, or was it Louis LePrince? That question begs two others: What caused LePrince’s mysterious disappearance in 1890 and what, if anything, did Edison have to do with it? These questions are fraught with mystery and, even after Paul Fischer’s new book, remain frustratingly unanswered.

In The Man Who Invented Motion Pictures: A True Tale of Obsession, Murder, and the Movies, Fischer looks for answers to those questions premised upon the claim of LePrince’s widow, Lizzie, that Edison killed her husband, hid the body, and stole his patent. Part detective story and part scientific journal, Fischer’s narrative will appeal to true crime afficionados, history buffs, movie fans, and engineers—what other book can claim that audience?—as it presents a possible alternate history to that which is commonly accepted.

Although Louis LePrince may have gotten a jump on Edison in the late 19th century when it came to developing the technology for motion pictures, the next step was to patent his creation. That required him to place his trust in the hands of patent agents, which well might have been his downfall.

As Fischer tells us, forebodingly: “A competent lawyer with the resources to research patent history (so as to preempt any objections on the basis of preexisting inventions) and the skill to draft clear, precise applications, was a necessity. One you could trust not to steal your idea was even better.”

For this task, LePrince turned to a well-known patent agency, Munn & Co. Nevertheless, due to the innovative nature of his invention, he suffered multiple rejections of his patent applications from skeptical examiners before finally being accepted in 1888. As one examiner told him, “Good thing for you we’re not still living in the age of [superstition and] witchcraft.”

And then in 1890, LePrince mysteriously disappeared without a trace.

While LePrince had battled for acceptance of his innovations, Thomas Edison had less difficulty with a similar concept, likely preceded by his reputation. When Edison presented his “kinetograph” in 1891, Lizzie LePrince first read about it on the front page of the New York Sun. The description of the machine matched in minute detail her husband’s work.

Edison had filed his first “caveat” (a form of prepatent) in 1888, but for Lizzie, it was too much of a coincidence that he filed his final caveat just a few weeks after Louis’s disappearance. “It was my husband’s invention of moving pictures,” she later wrote in an unpublished work.

Besides, as the author notes, it was widely known that Edison’s genius wasn’t in original thought. “Edison worked best when he identified existing innovations and improved on them, and in truth his original ideas were rare.” Circumstantial evidence, perhaps, to support Lizzie’s claim.

But Lizzie was unable to establish anything more than allegations, circumstances, and coincidences of timing to back up her claim. Her husband had been granted a patent in 1888, but because he had simply vanished, rights to his patent would not vest in her until seven years after his disappearance, when by law he could be officially declared dead. Thus, during the critical intervening period, she was unable to challenge Edison’s invention as an alleged infringement.

“That all changed when Edison—of all people—inadvertently threw out the rope with which she might hang him.” When Edison’s patent was formally granted in 1897, it was made retroactive to 1888, when he filed his first caveat. He then went after his competitors on the East Coast who were pursuing similar inventions, suing them all for infringement. But one of those competitors, American Mutoscope, brought Lizzie LePrince into the matter.

With her husband now declared officially dead, Lizzie controlled his patent, which was the only motion picture patent that preceded Edison’s claim. American Mutoscope asserted that Edison’s work infringed on LePrince’s and, if that could be proven, it would mean that he did not legally own the invention that he had infringed. It followed then that he could not sue others for infringing that which he did not own.

American Mutoscope even agreed to pay all expenses and legal fees for Lizzie to testify at the infringement hearing to establish her rights in her husband’s patent. Maybe she would finally get satisfaction in at least knowing that Louis’s claim trumped that of the great Thomas Edison. Or would she?

This all leads back to one of the original questions that started this review: What happened to Louis LePrince? Lizzie pinned everything on Thomas Edison, but the reader is left with nothing more than her supposition based upon coincidence and little fact. The author posits additional possibilities, but none of them are satisfactorily resolved.

The open ending raises yet another unanswered question: What might LePrince have been capable of had he been around to continue his work? As the author concludes: “The identity of the killer, like the role he might have gone on to have in shaping cinema history, will never be known with certainty.”