The Man Who Hated Women: Sex, Censorship, and Civil Liberties in the Gilded Age 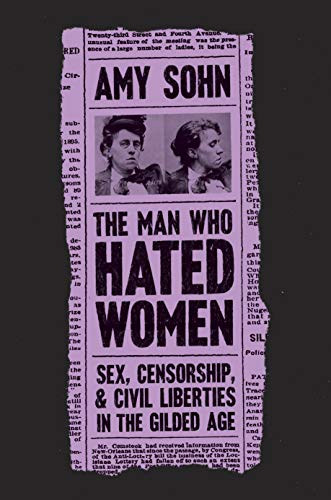 “A bright, deeply researched narrative that will fascinate feminists and history buffs.”

After the Civil War, many American women challenged the status quo regarding money, class, and sex. In The Man Who Hated Women, Amy Sohn tells the engrossing story of one little-known group of intellectual 19th century women: sex radicals who believed the fair sex was entitled to contraception, abortion, and orgasms.

With their “frank and bold” writing about sexual matters, these women violated the repressive 1873 Comstock Act, which banned the mailing of contraceptives and obscene materials. Anthony Comstock (1844–1915), for whom the law is named, was a special agent to the US Post Office, secretary of the New York Society for the Suppression of Vice, and an “extremely pious” Congregationalist.

The Connecticut-born Comstock was the era’s “moral scold.” His mother—a direct descendant of the first Puritans in New England—embodied “the Victorian ideal of womanhood—a saintly, pure wife and mother whose domain was the home.” He enjoyed punishing radical, intellectual women with liberal ideas regarding women’s rights.

Sohn focuses on a handful of such women. Most have been “written out of feminist history.”

Together, these eight women laid the groundwork for “legalization of birth control and protection of abortion rights,” writes the author. Their stories, told vividly by Sohn, a novelist and former New York magazine columnist, are told against the background of a turbulent late 19th and early 20th century America, when radical ideas flourished.

These remarkable women ranged widely in age and perspectives. Indeed, Sohn suggests some could not stand to be in the same room as the others.

Madame Restell lived and offered abortions just blocks away from St. Patrick’s Cathedral, to the annoyance of the archbishop.

Victoria Woodhull, an opponent of marital rape, told women who felt it was their religious duty to submit to their husbands: “I say damn such Christianity as that.”

Angela Heywood rented her 42-room New Jersey home out to agitators and spiritualists each summer.

A mixed, colorful, and dead-serious lot, their exploits shaped a “transformative” period for women in America, says Sohn.

Meantime, vice-hunter Comstock kept resolving to “do something for Jesus” each day. For decades he harassed the booksellers of Nassau Street, convinced the obscene material they purveyed was a “hydra-headed monster” that led to prostitution, illness, death, abortions, and venereal disease.

A bright, deeply researched narrative that will fascinate feminists and history buffs.