The Man Who Died Twice: A Thursday Murder Club Mystery 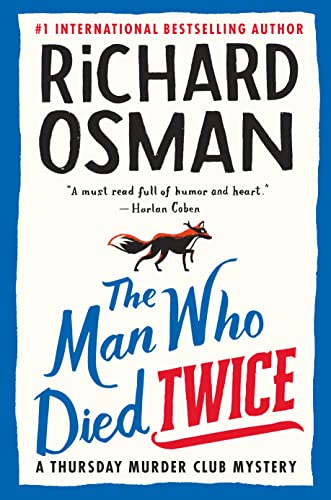 Millions of dollars’ worth of stolen diamonds, mixed up with murder . . .

Sounds like the premise of an international spy thriller. Instead, it’s a case for a quartet of senior citizens in a genteel English retirement home.

This comes as no surprise when you realize it’s adventure #2 for The Thursday Murder Club, introduced in a book of the same title. Elders Elizabeth, Joyce, Ron, and Ibrahim met through a recreation opportunity at Coopers Chase, their luxury retirement community, where they were able to get a room on Thursdays to entertain themselves trying to solve cold cases as an intellectual exercise.

Well, it worked, as book 1 proves. And now they have another mystery to untangle, this time more direct because the instigator comes back from the dead to ask Elizabeth for help.

Elizabeth has a mysterious past as an intelligence operative—a type who doesn’t go out to pasture easily. Her cohorts walked more mundane avenues of life. But they all love adventure and seeing justice served, so when a juicy case lands in their laps, they’re all aboard.

The ghost from Elizabeth’s past is a master manipulator who years ago faked his own death with Elizabeth’s help. She never found out what became of him—until he shows up at her door seeking refuge.

He impulsively went rogue on a job, stealing diamonds that would fund his permanent, secure retirement instead of turning them in. But in his overconfidence he robbed the wrong guy: the international illicit-goods dealer handling the diamonds for the Mob. Both parties are now after him with murder in mind.

The British and international authorities are also on his trail. Elizabeth and company are torn between aiding and abetting this man who was once her husband, or turning him in (after finding the diamonds, of course). They do an impressive fiddle to keep everyone chasing each other without getting caught in the middle. The chain of red herrings and move/countermove, cross/double cross will keep readers challenged by, if not reeling from, the complexity of it all.

The secret to success in enjoying this book (and its predecessor) is to accept its tongue-in-cheekness. Taking the scenario literally will spoil the needed suspension of disbelief, owing to liberties the characters take with legality through their personal relationships with the police.

Their dodges and convenient misinterpretations add levity to the story, allowing it to entertain while subtly facing issues of mortality and pathos—and absurdity. A lot goes on between the lines, which is what gives literary quality to the quartet’s adventures.

For instance, in the middle of a conversation pertaining to the plot, a recently injured Ibrahim says, “It’s fine to say ‘what doesn’t kill you makes you stronger.’ It is admirable. But it no longer applies when you’re eighty. When you are eighty whatever doesn’t kill you just ushers you through the next door, and the next door and the next, and all of those doors lock behind you. No bouncing back. The gravitational pull of youth disappears, and you just float up and up.”

Such comments both explain and confuse why the characters leap into the potential dangers inherent in the cases they explore. Is it an attempt to recapture lost youth one last time, or a fatalistic belief that nothing matters anymore? Or just a cerebral distraction from aches and pains, with no real understanding of the risk?

Each character chooses involvement based on their personal motivation, which readers see through revolving viewpoints. Meanwhile, as multiple parties pursue each other (and the diamonds), good people die. Unless they’re bad people. Or are they good people? It’s impossible to tell until the very end.

The combination creates a unique form of cozy amateur-sleuth mystery. Its tone is reminiscent of Alexander McCall Smith’s works (No. 1 Ladies’ Detective Agency, Isabelle Dalhousie Sunday Philosophy Club, etc.). These share a focus on the simple, important things in life, tinged with compassion—which similarly imbues the complex capers of the Thursday Murder Club.

There’s something for almost all readers in both the original and now the second book in this series. Just remember that “ironic” and “whimsical exaggeration” are included in the definition of tongue-in-cheek.