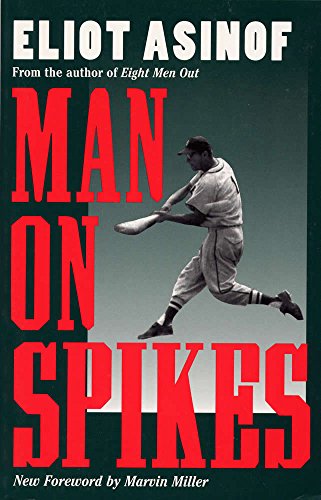 Spring training has begun, which also means that the corresponding flooding is about to occur:  flooding of the market with baseball books, that is.  Though greats like Roger Angell (The Summer Game), Roger Kahn (The Boys of Summer), and Thomas Boswell (Why Time Begins on Opening Day) have chronicled the hold that baseball has on the American psyche with some of the finest writing this country has ever seen, it is not uncommon for critics to dismiss most baseball writing as something less than literature—classics such as Marc Harris’ Bang the Drum Slowly or W. P. Kinsella’s Shoeless Joe, notwithstanding.If a younger generation of readers is unfamiliar with the names mentioned above, it is probably even less familiar with a man by the name of Eliot Asinof, who penned the book Man on Spikes.  In this book, Asinof, who is most noted for Eight Men Out, an account of the infamous Black Sox scandal in the 1919 World Series, tells the story of Mike Kutner through the eyes of the people he encounters on his journey through the minor leagues—a journey interrupted by World War II.Set in the 1930s, the book chronicles Mike’s love of the game, a love that is met with resentment from his coalminer father, who would rather see Mike contribute to the family income than play baseball.  Now that Babe Ruth has burst on the scene, Mike’s street-smarts, fielding prowess, and knowledge of the game are underappreciated, and the scout who signs Mike faces ridicule.  Along the way, the reader encounters, among myriad other characters, a ruthless minor league manager and a black player trying to crack the color barrier.First published in 1955, Man on Spikes had been out of print until it was finally reissued in 1998.  The new edition features a foreword by Marvin Miller, the former Executive Director of the Major League Players Association, and a preface by Asinof, who reveals that Mike’s story is based on that of his old childhood friend.When the urge hits this spring, instead of picking up the latest picture book of minor league ballparks or some insightful account of what was going through your favorite team’s manager’s mind in the seventh inning of a game from last season’s pennant race, go back in time and acquaint yourself with the story of Mike Kutner.  No baseball fan could possibly regret it.