A Man of Iron: The Turbulent Life and Improbable Presidency of Grover Cleveland 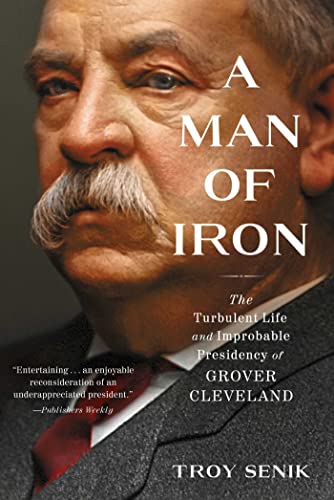 “Cleveland’s personal history offered no foreshadowing of future greatness. Even his own sister noted that, as a student, ‘Grover did not shine’ nor were the attributes that later distinguished him ‘conspicuous in his boyhood.’ Cleveland, himself, longed someday to be ‘better remembered.’”

If Donald Trump runs successfully for President in 2024, such that he will then serve his second, but non-consecutive, term as president, he will have accomplished something that not even Theodore Roosevelt could. Roosevelt was defeated in 1912 while running on the Bull Moose Party after having previously served prior to William Howard Taft’s first, and only, term.

However, should that happen, it would not make Trump the first to do so. That honor belongs to the little known and little understood Grover Cleveland, our 22nd and 24th president, with his terms separated by Benjamin Harrison, to whom he lost as an incumbent in 1888 but defeated in 1892 to regain the White House.

That begs several questions: Who was Grover Cleveland, and what prompted the American electorate to return him to office after having first unceremoniously turned him out of that same office? And do we have reason to remember him for more than a footnote for having served non-consecutive terms? Troy Senik answers those, and other, questions about a man he contends has been relegated to “undeserved depths” of “presidential obscurity” in his new biography, A Man of Iron: The Turbulent Life and Improbable Presidency of Grover Cleveland.

Senik contends that Cleveland deserves better than being remembered simply for that aforementioned footnote, notwithstanding its newfound prominence as 2024 draws closer, or his exercise of the veto as president, ranking him below only Franklin Roosevelt in the number of times he employed it—and Roosevelt had more years as president in which to run up the score.

“To be sure,” Senik writes, “this volume does not claim that Grover Cleveland had one of America’s great presidencies; but it does claim that, despite his many shortcomings, he was one of our greatest presidents.”

That’s a pretty lofty claim given the likes of Washington, Lincoln, and the Roosevelts—Franklin and Theodore. But Senik makes a compelling argument, so long as one realizes that it is unfair to measure “greatness” solely by “moments of extraordinary national hardship.” In fact, Cleveland was “not a larger-than-life figure,” but rather was “ordinary.” Therein, Senik says, “his greatness resided.”

Cleveland’s personal history offered no foreshadowing of future greatness. Even his own sister noted that, as a student, “Grover did not shine” nor were the attributes that later distinguished him “conspicuous in his boyhood.” Cleveland, himself, longed someday to be “better remembered.”

Senik argues that the attributes that made Cleveland great, that distinguished him from other politicians then and now, were his honesty and his integrity. As an officeholder, Cleveland viewed himself as a fiduciary. In his meteoric rise from sheriff to mayor of Buffalo to governor of New York to president of the United States, he consistently fought corruption that was commonplace in public office. Taxpayer money, Cleveland believed, was to be used “for a purpose connected with the safety and substantial welfare of the public.”

Although Senik obviously, and justifiably, holds Cleveland in high regard, he does not have blinders on when it comes to his subject. Even Cleveland’s integrity had its counterbalance in personal vices. He was given to drinking, eating, and gaming. And another of the footnotes for which he is known was allegedly fathering a child out of wedlock (possibly by virtue of rape, if one believes the sordid, but questionable, allegation), which surfaced during his first run for the presidency.

Cleveland defeated former Speaker of the House James G. Blaine of Maine in 1884 to ascend to the presidency, winning both the popular and electoral votes, but then lost to Benjamin Harrison in 1888, despite winning the popular vote. There were a number of reasons why he lost, not the least of which was monetary policy, but the New York Sun boiled it down to this: “The President of the United States has to be a politician.”

As Senik explains that pithy summation by the Sun: “All the traits that had propelled him to higher office—the refusal to deviate from principle; the unwillingness to genuflect to purely partisan interests; the confidence in his convictions that could, at times, bleed into self-righteousness—tended to shrink rather than expand his political coalition.”

For Cleveland, himself, the issue was much simpler: “It was mainly because the other party had the most votes.” That, of course, was true only of electoral votes, not popular votes.

After spending time in law practice in Manhattan while out of office, Cleveland ousted Harrison and was returned to the presidency four years later, again winning the popular vote (for the third time in a row). On this occasion, though, he also won the electoral vote, unlike in 1888. Unfortunately, he entered office at a time fraught with even more economic uncertainty for the country than when he had left four years earlier, though some of the culprits were familiar—a still fragile gold standard and clamor for tariff reform, among others.

What some called a “great depression,” but history more popularly knows as the “Panic of 1893,” dominated the first year of his return. On the heels of that came the strike of Pullman car porters, disrupting train service and creating a ripple effect across the country.

The country was also in a frenzy of “manifest destiny,” which Cleveland resisted, most notably in putting the kibosh on annexation of Hawaii after overthrow of the Hawaiian monarchy. Senik writes that Cleveland’s message on Hawaii—“. . . the government of a feeble but friendly and confiding people has been overthrown. A substantial wrong has been done which a due regard for our national character as well as the rights of the injured people requires we should endeavor to repair.”—“was perhaps the rhetorical high-water mark of his entire eight years in office.”

Be that as it may, Senik also concluded that “. . . it was utterly inert.” He writes that “Cleveland roared . . . and Congress yawned.”

In addition to the economic and national expansionism issues, internecine warfare within the Democratic party wracked Cleveland’s second term. All this combined to doom Clevelandism and gave rise to populism as embodied by William Jennings Bryan, the party’s nominee in 1896. Bryan would lose that race and go on to lose two more, for a total of three races he lost for the Democrats. Perhaps that made some in the party nostalgic for the good ol’ days of Grover Cleveland and his hat trick with the popular vote.

By the time Cleveland left office after his dismal second term, his fate as an unpopular president was sealed. According to one anecdote in the book, when a visitor’s dog plopped his head on Cleveland’s lap, the ex-president resisted the owner’s attempts to pull the dog back. “He at least likes me,” Cleveland said.

In addition to the author’s particularly engaging writing style, A Man of Iron is worth reading for its insights into a man whose integrity dominated his presidency, even when it cost him politically. Senik summed up Cleveland thusly: “Everything worth saying about Grover Cleveland boils down to that one elemental fact: he possessed moral courage at almost superhuman levels. He was consistently motivated by conviction, even when he knew he’d suffer political harm.”

Not a bad epitaph. Sadly, that characteristic is conspicuously lacking in most modern politicians. The cynic might even suggest that moral courage and conviction simply have no place in today’s politics. If that be true, then more’s the pity.