The Man from the Future: The Visionary Life of John von Neumann 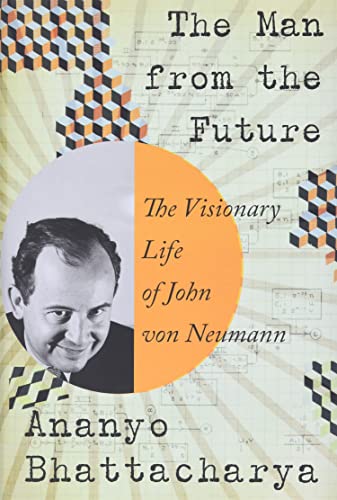 “Bhattacharya both begins and concludes this impressive biography of John von Neumann by celebrating his contribution to the ‘march of ideas’ and acknowledging that his ‘legacy is omnipresent in our lives today.’”

Von Neumann was a scientific visionary who served his adopted country, the United States, during World War II (he was born in 1903 in Budapest, Hungary) helping other scientists on the Manhattan Project, and during the early years of the Cold War by helping Edward Teller and others develop the hydrogen bomb just a few months ahead of the Soviet Union. After World War II, he was recruited to the RAND Corporation—a think tank initially established by the US Air Force that helped develop strategies for deterrence and for fighting and winning a nuclear war.

But Bhattacharya shows that von Neumann’s national security work was just a part of his scientific contributions that have more broadly shaped the world we live in. “Look around you,” the author writes, “and you will see Johnny’s fingerprints everywhere.” Personal computers, smartphones, artificial intelligence, virtual reality technologies, genetic and geo-engineering technologies—all can be traced back to von Neumann’s ideas and theories.

John von Neumann’s brilliance was evident even as a child when at an early age he learned Greek, Latin, and spoke at least four languages. He read widely as a child and had a remarkable memory. He studied chemical engineering and mathematics in Budapest, Zurich, and Berlin. At the young age of 22, Bhattacharya notes, von Neumann “helped to lay the mathematical foundations of quantum mechanics.” And that was just the beginnings of his enormous scientific contributions to the world.

Bhattacharya quotes from a few of von Neumann’s letters in the 1930s, in which he warned friends that “There will be a war in Europe in the next decade,” that the United States would get involved in the war “if England is in trouble,” and that Europe’s Jews could suffer a genocide. He thereafter used his mathematical genius to support America’s and the Allied war effort. He first worked on ballistics and explosives before turning all of his energies to the Manhattan Project.

Von Neumann experienced communism in Bela Kun’s post-World War I Hungary, and later from his perch at the Institute of Advanced Study (IAS) at Princeton, he saw what Nazi totalitarianism did to Germany (and Germany’s scientists) and how it threatened to engulf the world in war. And he understood after the war that the Soviet Union posed a similar totalitarian threat to the United States and the West. Stalin, he believed, had to be kept in check. Von Neumann was an early supporter of President Eisenhower’s strategic doctrine of “massive retaliation.”

The author, who has written about science for the Economist and Nature, treats us to mini-biographies of the scientists and theorists who stood (and still stand) on the shoulders of von Neumann, including Albert Wohlstetter, Herman Kahn, Freeman Dyson, Bernard Brodie, Arthur Burks, John Conway, Stephen Wolfram, John Nash, and others.

President Eisenhower recognized von Neumann’s immense contributions to science and US national security by awarding him the Presidential Medal of Freedom a few months before von Neumann died of bone cancer at the age of 53 in 1957.

Bhattacharya both begins and concludes this impressive biography of John von Neumann by celebrating his contribution to the “march of ideas” and acknowledging that his “legacy is omnipresent in our lives today.”