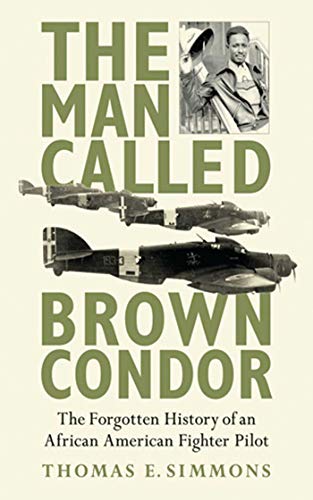 “Mr. Simmons’ book is riveting, with a style and pace that takes the reader on the journey with John Robinson—the African American man called brown condor.”

When a seven-year-old child called John Robinson described to his stepfather the spectacle of a seeing an airplane fly for the first time, he assured his daddy that he was “gonna fly in one of those things some day.”

The year was 1910, and the place was the segregated town of Gulfport, Mississippi. Not surprisingly the man wondered how he would ever explain that a black man had about as much chance of flying as he himself had of driving a train for the railroad company he worked for.

This was a world of “White Only” signs and Jim Crow segregation but eventually, fly Robinson did—and not just as a passenger.

After the First World War, the young John Robinson recognized the looming rise of the automobile. With engine oil practically running in his blood, he set about getting himself trained as a mechanic.

Still at school, he worked at weekends and holidays at anything from loading trucks to shoe shining to save for a college education. Before long, he was leaving momma’s cooking and gumbo behind and was in the “colored only” railway coach on his way to college in Tuskegee.

Once he’d mastered the intricacies of car engines, he set his sights on working on aircraft and learning to fly. It was the beginning of a long road that would ultimately lead him to Africa where he would become a colonel and the commander of the Imperial Ethiopian Air Corps during the bloody war of 1935 with a predatory, fascist Italy.

Thomas Simmons charts the years from the beginning of Robinson’s passion for flying in engaging fashion with accounts of the kind of seat-of-the-pants flying that are typical of this pioneering era of flight. Few pilots, however, shared his experience of landing at an airstrip with a near empty fuel tank only to be told they didn’t serve fuel to black people.

Mr. Simmons’ book is riveting, with a style and pace that takes the reader on the journey with John Robinson—the African American man called the brown condor.

Robinson’s determination to encourage black pilots was matched by his ability to build and maintain aircraft. His influence on the establishment of a school of aviation at Tuskegee was also huge while his wartime exploits in the skies of Ethiopia were legendary. He would come to love Ethiopia as a home away from home. He ultimately died there.

Described as “the forgotten history of an African American fighter pilot,” this biography also documents the resolve of one man who proved by example there are no limits to what a minority with determination and passion can achieve.