Man and Wound in the Ancient World: A History of Military Medicine from Sumer to the Fall of Constantinople 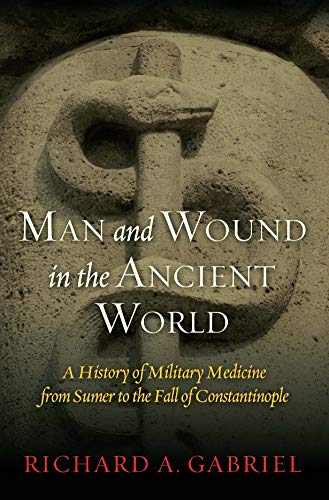 “Richard Gabriel undertakes a formidable challenge in writing on a topic little understood: the history of ancient military medicine. By all accounts he has brilliantly succeeded. Dr. Gabriel employs a very accessible and engaging writing style to discuss the topic.”

Richard Gabriel undertakes a formidable challenge in writing on a topic little understood: the history of ancient military medicine. By all accounts he has brilliantly succeeded. Dr. Gabriel employs a very accessible and engaging writing style to discuss the topic.

Dr. Gabriel presents the thesis that advancements in medicine in the ancient world were motivated by the actions of war. Physicians were needed to attend to injured soldiers, leading to advances in emergency care and surgeries. The civilian sector, on the other hand, was often dominated by priests who attempted to treat patients by spiritual rather than by empirical means (observation).

The book begins with a discussion of the nature of warfare, injuries, and fatalities in the ancient world. This discussion provides a context in which military medicine developed. Each succeeding chapter then addresses the state of military medicine in each major ancient civilization from Sumer to the fall of the Byzantine Empire, a period ranging from 4000 BCE to 1453 CE.

In many cases, a full understanding of the advances of ancient medicine is limited by the remaining few written documents that have been discovered. As civilizations fell and were replaced by others, new languages came into being. Although many medical advances were lost with fallen civilizations, others were maintained by oral tradition. When written records were few or unavailable, Dr. Gabriel made conclusions by carefully qualified statements.

Throughout the history of the ancient world there was a conflict among the groups regarding the best way to treat patients. These groups included the sorcerer who sought to influence outcome of the patient by invoking supernatural powers or interpreting omens; the priest who used incantations and exorcisms in order to remove evil spirits that may inhabit the sick person; and the medical technician who treated the patient by empirical methods.

The priest held a dominant role in many ancient cultures, resulting in his role holding sway in medical matters. It was only when the role of the less highly regarded physician was separated from the priest that medicine could advance through empirical methods. This typically happened during military campaigns.

Dr. Gabriel uses his extensive breadth and analysis of ancient cultures to put the subject of military medicine in context. He can therefore refute the idea that the Greeks were the “fathers of modern empirical medicine,” by showing that Greek medicine was adopted into modern medicine because of a certain set of circumstances. Dr. Gabriel pointed out that Indian empirical medicine was more advanced at the same time.

The establishment of an organized military medical corps in the ancient world was slow in coming. It remained for the pragmatism, stability, and order of the Roman Empire to allow medicine to flourish. In addition to well-equipped physicians, staff, and hospitals within military units, outstanding works on pharmacology and medicine were produced during this period. With the fall of Rome, most of these advances were lost until the nineteenth century.

Contrary to modern times, there was little transfer of technology between cultures in ancient cultures. All these factors resulted in a waxing and waning of medical knowledge. As a civilization collapsed, the knowledge gained in that culture died with it.

In Man and Wound in the Ancient World: A History of Military Medicine from Sumer to the Fall of Constantinople Dr. Gabriel provides many examples of medical advances in the ancient world that were lost until the 19th century.