A Man and His Maniac: The Bunkie Story - Second Edition 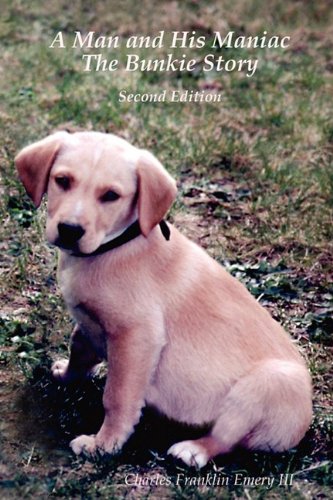 Dog stories are meant to tug at the heartstrings. But A Man and His Maniac: The Bunkie Story does so in a down-to-earth way. Charles Franklin Emery III realistically depicts the highs and lows of pet ownership. What emerges is a complete portrait of a yellow Labrador Retriever named Bunkie and the powerful relationship between a man and his dog.

A chance encounter brings the two together. While running errands, Emery happens upon a woman selling puppies. On an impulse, he purchases one for the asking price of $10. As a former Navy man, he names the dog Bunkie, a nickname for a sailor’s favored sleeping quarters.

One thing Bunkie quickly becomes known for is making a mess. Before officially becoming an outside dog, several carpets and pieces of furniture are victims of his bowel movements. Another time while Emery was landscaping the yard, Bunkie got into the manure. Before Emery could stop him, he entered the house and began rolling on the living room floor.

When riding in the car, Bunkie would sit directly behind Emery with his paws on his shoulders. This seating arrangement, while humorous, turned tragic when the two were involved in a car accident, and Bunkie was sent hurtling through the windshield, down the hood of the car, and onto the road. Amazingly, he survived and was found barking at oncoming traffic. On another drive, Bunkie chased a squirrel by jumping out of a moving truck bed. Unfortunately, his timing was off and his head connected with a large boulder. Yet once again, he made it through the ordeal.

On another occasion, Bunkie left the safety of his backyard and was missing for over a month. Emery was determined to find him keeping in close contact with the local animal shelters. He received many leads and even had to ID a body. One day while Emery was making a routine visit to a shelter, Bunkie burst through the door with a shipment of new dogs. He had a tire tread mark right between his eyes, but he was finally found.

The two formed a strong bond over a shared love of hunting. Bunkie was a natural. His body would go as stiff as a board when he would hone in on his prey. While on point, he would alert Emery to the presence of a bird and then flush it out. After Emery’s successful shot, Bunkie would proudly retrieve the catch for his master. Bunkie’s hunting prowess became a tale of legend among Emery’s co-workers and fellow hunters. Yet due to loyalty or stubbornness, Bunkie refused to hunt for anyone but Emery.

The most touching part of the story can be found in its final pages. At age 14, Bunkie was blind, deaf, and in serious pain. Emery made the heart-wrenching decision to put him down. He died in the vet’s office in the arms of his lifelong friend.
Emery makes many significant points about his life with Bunkie that apply to every pet owner. Here are just a few:

"Owning and caring for an animal is a responsibility. Most of the time that responsibility is a happy, welcome, and magnificently enriching experience. It’s very fulfilling and usually brings years of enjoyment and countless happy memories. Unfortunately, that responsibility also includes the necessity of making decisions that will prolong or end your charge’s life. There is one thing for certain: unless you die first, you are going to have to cope with the fact that you will probably outlive your pet."
“That is the primary reason for the Bunkie chapters: to honor Bunkie’s memory and immortalize him; it’s the least that I can do for my friend. It would bring me no greater pleasure than to have people read this book and derive enjoyment from the tales of Bunkie’s life.
“Then when I found Bunkie in that cardboard box on a Bremerton street corner, I knew that [God was] thinking of me. I saw [God] in his eyes. When Bunkie died, I consigned him [God’s] care. I knew [God] would take care of my old buddy and that I would see him again.”

Overall, if you’re a fan of Marley & Me, you’ll fall in love with Bunkie.