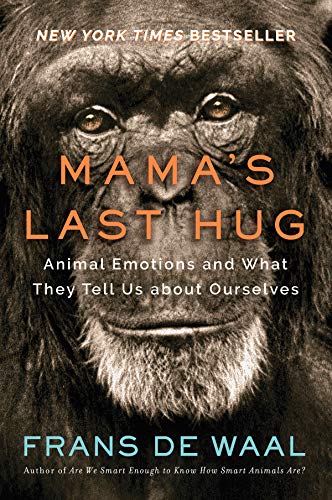 “It’s impossible . . . to read Mama’s Last Hug and not see a door opening to a wider view of humans, our primate relatives, and so many other creatures.”

Mama’s Last Hug raises the once ignored and now debated question of whether animals have emotions. This is no arcane scientific dispute, but a question with enormous moral and legal consequences, as de Waal stresses in his conclusion.

Believing that non-human animals are merely survival-oriented and instinct-driven, lacking in understanding or the capacity to feel their situation, has been one of the justifications for factory farming, animal experimentation, deforestation, and a host of other harms done for human benefit.

But first, de Waal has to answer another question: Just what is an emotion? To do that, Mama’s Last Hug opens with the story of Mama, the Burgers Zoo’s chimpanzee matriarch, whose deathbed hug with her long-time human keeper can be seen on YouTube.

But it’s not Mama’s or any animal’s feelings that concern de Waal, but her emotions, which are “bodily and mental states—from anger and fear to sexual desire and affection and seeking the upper hand—that drive behavior.” Caused by stimuli such as external events, and occurring alongside behavior changes, emotions can be observed due to a creature’s gestures, tone of voice, skin color, or other non-verbal communication.

De Waal slices a razor-sharp distinction between emotions and feelings, which are “internal subjective states” best or more accurately only known by the creature experiencing them. De Waal brooks no romanticizing of animals, stating: “Anyone who claims to know what animals feel doesn’t have science on their side. It remains conjecture.”

What de Waal has on his side to argue the case for animal emotions is observation, field work, and empirical studies. While de Waal ranges far and wide across species, he mostly focuses on our primate relatives, especially chimpanzees.

Regardless of the species, de Waal asks us to look at animals as they are and not how we believe them to be. From cooperation to competition, empathy to disgust, fairness to power, problem solving to a future orientation, de Waal finds evidence that a shared evolution and biology fostered in humans, primates, and other species common behaviors and emotions.

Emotions, of course, can’t be the only explanation for the remarkable complexity primates and other mammals, and even fish and birds, demonstrate in their daily lives. Unfortunately, de Waal often gives brief (if not dismissive) attention to alternative explanations for animal behavior. This limits Mama’s Last Hug’s value to lay readers seeking a comprehensive introduction to the complex and sometimes murky issues surrounding human and animal cognition, emotion, and feelings.

It’s impossible, though, to read Mama’s Last Hug and not see a door opening to a wider view of humans, our primate relatives, and so many other creatures. Perhaps Mama’s Last Hug’s greatest strength is that any reader willing to walk through that door will find some answers to what it means to be human but even more questions to spark ongoing discoveries.