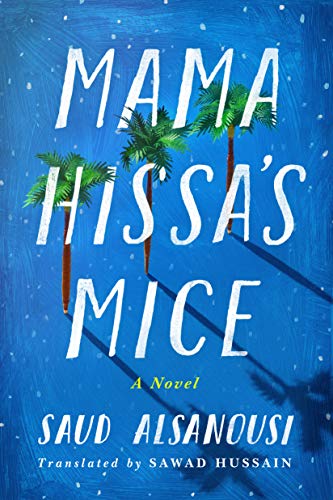 It may be tough to read complex novels in these days of social media platforms and fast food fiction, but Mama Hissa's Mice by Saud Al-Sanousi, translated by Sawad Hussain, is worth your time.

Growing up together in a Kuwaiti neighborhood, Katkout, Fahd, and Sadiq become friends even as they become aware of their different national, ethnic, and religious origins. As they mature, they share a simmering anger against a confounding sectarian divide that is causing escalating conflict and destroying their neighborhood. Eventually, in response, they form the protest group Fuada’s Kids, making them targets of both Sunni and Shi’a extremists.

They work anonymously but realize the danger of their work. An attack leaves Katkout injured and unconscious. When he comes to, his friends are not with him. As he sifts through long-forgotten memories and a burden of guilt in a city turned to chaos, Katkout comes to the stark realization of the part he has played in violence, when only wanting to facilitate peace.

Some of this novel's long cast of characters are more memorable than others, namely timid, compassionate Katkout and his friend Fahd's grandmother, Mama Hissa, who spins stories and superstitions like a spider. Her stories leave Katkout fearful of everything from mice and dogs to the sky falling from God's wrath, but he’s full of love for her. Her stories and Katkout's form an anthology of personal remembrances—spanning Khomeini's revolution against the Shah of Iran in 1979, the eight-year Iran-Iraq war and the Iraq-Kuwait war, and ending with an imaginary but completely plausible civil war in Kuwait in 2020.

It would be remiss not to speak about the strong treatment of women in this novel, but there's good reason Mama Hissa is its namesake. Mama Hissa, a born storyteller, whether she's crafting fable or family tale, is full of wisdom along with her warnings. She leaves her storytelling ability as legacy to Katkout. It could have been titled, The Inheritance of Fire, because it’s plot thread involves how violence and rage spread from generation to generation, turn into wildfire, and leave only ashes.

Sawad Hussain does an admirable but direct translation of the original Arabic novel. You will hear the lilt of Arabic in her English translation of this war saga, taking place over 42 years and four generations. Many Arabic authors write family war stories. However, this book takes a venerated Arabic tradition to a new level, making it a neighborhood war saga. The author's voice tends toward magical realism in the past, but has a blunt, journalistic staccato reporting the present day. Katkout dissects his past both as a way of coming to terms with the results of the attack on him and his friends, and to figure out why and how it happened, including his own often unwitting part in it all.

The novel is intermittently sarcastically comic and harrowingly tragic. Interspersing past and present, the author shows how the every day, every action reverberates into the future. Thus, this book is both a coming of age novel and a contemporary look at the ongoing violence in the Middle East and Persian Gulf States. The plot escalates toward a war that could easily happen and that echoes those in other parts of the region--brought on by citizens that used to be neighbors.

This is a novel about how suspicion and exclusion can lead to violence, and how truth and art can heal us all. Yet it also bears a foreboding message that war will continue unless we can connect and unite in a movement of understanding and peace. The reader watches, helpless, much like Katkout, as the neighborhood transforms from tolerant to nationalistic, dissolving into hostility, then complete chaos.

The list and names of characters, the Arabic words, the alternating points of view, and the long phrasing of sentences may make an unmotivated reader close the book. You may feel ungrounded in the juxtaposition of time and place at first. Yet those who persevere will be rewarded with a thorough (though fictionalized) rendition of the history that led to current Middle East politics and violence. This novel should be used in classrooms to educate students about what got the world to this place. The novel has a place on the general reader's bookshelf because of lovable Katkout and his desire to do the right thing despite every reason to do the contrary.

Kathryn Brown Ramsperger is the author of The Shores of Our Souls, winner of a 2017 American Book Fest Best Book Award for Best New Fiction and a 2017 Foreword Indie Book Award for Multicultural Fiction. Her novel was also a Faulkner-Wisdom 2016 fiction finalist.