The Making of the President 2016: How Donald Trump Orchestrated a Revolution 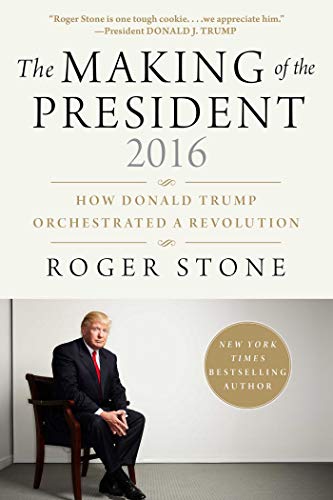 The subtitle of this book is How Donald Trump Orchestrated a Revolution, so you might think that Donald Trump plays the starring role in it. But you’d be wrong. He doesn’t. Aside from some minor revelations about how long Trump planned what would later appear to be spontaneous decisions—he trademarked the slogan “Make America Great Again” in 2013—there’s very little Trump, doing very little orchestrating, in these pages.

To get the real flavor of The Making of the President 2016, consider the story that author Roger Stone tells just a few paragraphs into the book:

In 1989, Stone was working for Trump as a lobbyist in Washington, DC. Stone calls Trump (“Donald,” always “Donald”) to say he is flying up to New York with papers that need signing. At first, Trump puts Stone off. Trump says that he is about to board a helicopter to Atlantic City with some of his executives, and the paper signing can wait. But Stone convinces Trump to stay behind in New York. Trump does as told. Stone flies up to New York. He and Trump meet. Shortly into their meeting, Trump’s assistant interrupts the two men to tell them that the Atlantic City-bound helicopter has crashed. Everyone aboard was killed.

Here is how Stone reflects on that moment: “While Trump may have booked other appointments after mine, I know that his life was spared to save our Republic and restore our economic vitality. This was the point at which I realized that Trump had been put on Earth for this larger purpose. This was the point that I realized he would be President.”

So basically, God wanted Donald Trump to be President. And Roger Stone is the agent of His divine will. Not to mention that Roger Stone is a prophet who can tell the political future. And a guy who can get Donald Trump to do his bidding. And a guy who saved Donald Trump’s life. And a guy, you get the feeling, who thinks he has not gotten enough credit for any of this (not even from Trump, who on that fateful day “booked other appointments,” just like it were any other afternoon, and Stone were any other paper-pusher).

Roger Stone is not without political talent, albeit of a dark kind. He takes a lot of credit for the Bill Clinton “RAPE” T-shirt campaign and the Danney Williams paternity appeal, and if you do not know what I am talking about, you should.

Much of what Stone says in this book stretches the bounds of plausibility. Stone is preoccupied by the possibility that Hillary Clinton has Parkinson’s Disease, and he is convinced that Huma Abedin is “a Saudi Spy at best and a possible terrorist agent at worst.”

And at one point, he suggests that Trump was a better campaigner than Clinton because he had a fancier plane. (While considerations of length do not permit me to reprint his entire paean to the Trump jet, I can sum up its spirit with Stone’s observation that the “24-karat gold seatbelts” are there to make “Mr. Trump and his forty-three guests feel comfortable.” By contrast, Clinton’s plane “lacked not only a master bedroom with full bath,” but also gold seatbelts. As if she were a common field hand.)

Such paranoid and indulgent forays distract from the moments where Stone does do a good job explaining the weaknesses of Clinton’s campaign, especially his critique of the campaign for being too invested—and only superficially invested—in identity politics.

Indeed, putting most of your eggs in the basket of identity politics is risky at best, especially when your party is still dominated by wealthy white people like Hillary Clinton and Bernie Sanders. (Aside to Bernie supporters: He may be less wealthy than most other U.S. Senators, but Bernie is still a wealthy white guy.)

Stone, by his own account, was convinced that Clinton was vulnerable precisely among the voters she thought she’d locked down with the identity-politics approach. So he tried to peel off just enough of her female and minority support to render a Clinton victory impossible. (There’s a classic piece of political wisdom for you: Attack where your opponent does not feel weak because that’s where her guard is down.) If Stone is telling the truth here, and that’s what he did, it worked. Despite Trump’s racist haranguing and sexist banter, Trump did proportionately better among both black and women voters than either Mitt Romney or John McCain. And in the key swing states, that proportional difference made all the difference.

There are many provocative political musings here, but they get lost in Stone’s avaricious appetite for self-promotion and grudge-holding. By the end of the book, Stone is literally settling his own scores. (I mean, really literally, as in: “Given that [attorney David] Boyce had been my nemesis in the 2000 Bush versus Gore Florida recount, the score is now Stone: 2; Boyce: 0.”) And he is advertising his current entrepreneurial ventures. And he is griping, not subtly, that since his election Trump has been listening to the wrong people—e.g., not Roger Stone—and risks becoming just another pawn of Wall Street.

Sigh. Please note that even after the Union won the Civil War, Abraham Lincoln never called himself—or the North—the winner. He wore victory like a shroud, carrying it like a burden, reminding Americans that the costs of all battles are shared. We all pay a price for what the victors have done to win, and what the losers did in defense. Lincoln also cautioned his fellow Americans not to presume that they could discern divine intent. Pretending to know God’s will, said Lincoln, is to play a false and dangerous game.

Well, there has been at least one revolution in American politics. The party of Lincoln has become a party on Lincoln’s grave, a gaudy and self-satisfied repudiation of the core principles for which our 16th president stood and gave his life. I doubt that Trump orchestrated it, or Stone orchestrated it, alone. But we will all be paying the price—at what cost, we don’t know—for a long time to come.