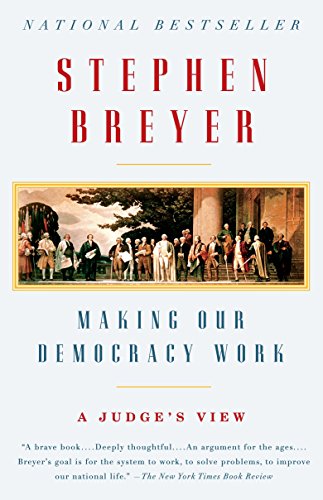 Associate Justice Stephen Breyer has enumerated many goals in writing this scholarly look at how our democratic system of government works. He intends to “increase the public’s general understanding of what the Supreme Court does. “ To do this, he takes us behind its “guarded door” and explores its role as the guardian of the Constitution. As such, the Court has the power to strike down a statute that is considered incompatible with this document. This power has evolved through what Breyer calls “fits and starts,” sometimes through some painful and very consequential lessons.

To illustrate this evolution, Breyer cites five decisions handed down by the Court. He starts with Marbury v. Madison in 1803, the decision considered to be the bedrock of checks and balances between our three branches of government.

Next, he describes President Andrew Jackson’s choice in 1830 to ignore the Court’s decision when he sent in troops to evict the Cherokee Indians from its tribal lands. Breyer describes this as an early example of “enforceability put to the test.” The Dred Scott v. Sanford decision of 1857 is credited with bringing about a war that the Court sought to avoid. It is considered by many to be the Court’s darkest hour.

In 1957, President Dwight D. Eisenhower sent troops in to Little Rock because the governor of Arkansas refused to comply with the Court’s decision in Brown v. Board of Education. This is an example of the interplay of two branches of government working together. Breyer further includes a more contemporary example—the Bush v. Gore election decision. Although highly controversial, Gore and the public accepted the Court’s decision.

The Court’s boundaries are set in the Constitution, and the Court is thus considered the ultimate arbiter. Its decisions have influenced the direction of the country in matters ranging from election boundary reapportionment, affirmative action, abortion, prayer in public schools, search and seizure, and desegregation. Why should it have the power? Breyer feels that this is the key to a “workable democracy.” It creates a dispersion of power and prevents the tyranny that can result from power emanating from the center (i.e. a monarchy) instead of from the periphery.

Having said all of this, it may surprise the reader that the Court’s role is actually very limited. The states are responsible for 95 percent of American law—family, property, tort, business, and criminal. The Court’s role centers around resolving conflicts of interpretation among lower courts. Of 45 million cases heard throughout the nation, about eighty end up on the Court’s docket each year.

Breyer further seeks to answer the question of how the Court “applies the values of the Constitution to the changing circumstances of today’s world.” Here, the writing becomes more complex and technical. He explores and explains the various legal tools that are used for deciding cases, and cites case examples to illustrate the concepts of originalism vs. pragmatism, precedent, purpose, consequence, and the “comparative expertise “ of other administrative bodies. He further explains decentralization and subsidiarity, which simply said, means that “power should rest in the hands of the smallest unit of government capable of dealing successfully with that kind of problem.”

With each concept he raises questions and then illustrates how the Court came to a decision through the use of these various legal tools. At minimum, the reader will understand the process involved in deciding cases, the questions that are raised, and the need for our government to have a final arbiter when lower courts conflict. Since the Constitution and its amendments are mentioned repeatedly, Breyer could have included a copy in the Appendix.

What happens when we realize that decisions made decades ago are not valid in today’s world? Breyer uses the example of how Brown v. the Board of Education (challenging segregation) overruled the Plessy v. Ferguson (separate but equal) decision of 58 years earlier. The Court has the burden of evaluating whether more harm results in change or in maintaining the status quo. This is referred to as “stability.” The nation has amended the constitution only 27 times.

Of paramount importance to a democracy is the protection of individual liberties. How does the Court protect these rights? Breyer cites cases illustrative of key amendments, especially the Bill of Rights. He also examines the role of the Court vis a vis the president, especially in times of war. To do this, he uses examples from World War II relating to Japanese internment and current examples of Guantanamo detainees.

This is an inclusive and scholarly effort to present the Constitution and the Supreme Court to the American public—lawyer and non-lawyer alike. Breyer demonstrates how democracy works and documents the difficulty and complexity of the Court’s role as final arbiter. His faith in democracy and in the ability of the people to govern themselves, shines through. However, this writing did not examine decisions of any individual justice. Thus, Breyer’s parenthetical references to his own opinions did not seem necessary.
Breyer hopes that the book is accessible to a general audience, and that it will be interesting and informative.

Accessible? Maybe. Anyone with a background in political science or law can easily grasp his points and stay with him. Readers with less background could require a more anecdotal framework to begin their process of understanding. Some readers might do well to begin with Jeffry Toobin’s The Nine or Michael Trachtman’s The Supremes’ Greatest Hits to supply that framework and make Breyer’s book more digestible to the uninitiated.

In any case, the reader will come away with a greater respect for the Constitution—its simplicity, yet its ability to endure as the key to maintaining a democratic form of government—and the Supreme Court’s role as its guardian.