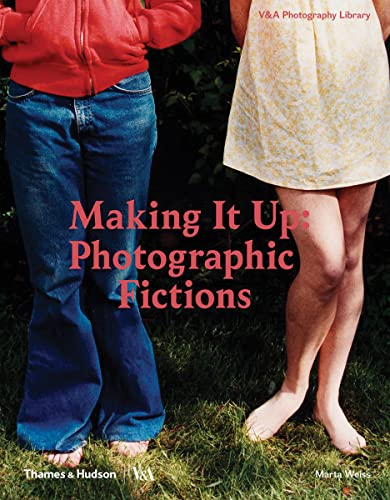 “Staged as they are, in moments of near-communication, the images seem always on the verge of sound, even when they were captured in Victorian silence.”

Collections of photography are odd creatures. Most such books are dedicated to the contents of the photographs rather than to the images themselves, and how they were created. Photographs purport realism; surely no history is required.

In Making It Up, Marta Weiss challenges this assumption. She draws out the world of staged photography from the permanent collection of the Victoria and Albert Museum. It’s a limited scope and a useful one. No all-encompassing account of staged photographs is genuinely possible, but Weiss’ reliance on the V&A collection (of which she is curator) creates a world in small that overlays artifice and insight.

Weiss emphasizes 19th century photographers’ use of staged photographs to establish their medium as a legitimate artistic practice. “Since narrative had long been accepted in painting—whether in grand history paintings or domestic genre scenes,” she writes, “some photographers tackled such themes in order to stake a claim for photography as an art form.”

The earliest photo of this type included in the collection dates from 1842, only three years after the invention of the daguerreotype. A woman and a child tend to a wounded soldier. The photographer is unknown, but the human figures are startlingly vivid. Freed from the period convention of rigid portraiture, their intimate expressions capture a crucial vision of humanity in the past.

Though Weiss features a fairly wide range of early photographers, pride of place naturally falls to Julia Margaret Cameron, whose Pre-Raphaelite-styled figures re-enact myth with a poise subtly different from paintings of the same subject matter and period. The human element is caught in mid-gesture, and the time lapse (seconds or minutes instead of weeks or months) emphasizes charming spontaneity. Weiss’ note on “Vivien and Merlin” indicates the model-actress playing Vivien’s frustration with her counterpart (Cameron’s husband): “Charles could not stop chuckling during the theatrically posed sitting, thus spoiling many negatives.”

Making It Up builds a bridge between the 19th century, when staged photography was common, and the form’s second act, which began in the 1970s. Modern staged photography is more politically complex and notably international (the book features images from the UK, the US, Iran, Germany, China, Canada, and Brazil).

Far from periodizing the collection, Weiss arranges the book in a thematic flow. The 19th century is visually distinct from the 20th and 21st, and each plate (there are more than 100 in total) carries its relevant dates and information. Yet by allowing the past and the present to move together, Weiss reveals connections of intention and execution. Yinka Shonibare’s self-portraits Diary of a Victorian Dandy echo William Hogarth’s 18th century cycle A Rake’s Progress in content and composition, but visually the connection to the 19th century is strong. The result is “a playful comment on historic depictions of black people” that encompasses three centuries rather than two.

With curatorial inflection, Weiss occasionally offers comments on how 19th century images might have been achieved. She notes that Angus McBean’s “Surreal Portrait of Diana Churchill” is a result of practical rather than filmic effects: “he built an elaborate set through which the actress could insert her head.” Likewise, Weiss provides brief but engaging comments on the history of stereographs (photographs taken from slightly different angles which could be looked at through a device to mimic three-dimensionality).

She is less detailed in her discussions of contemporary photographic processes. Though she does explain that “Dressed for the Ball” portrays a dog “not actually wearing the dress,” readers seeking insight into modern approaches to print-making and image construction will have to look elsewhere.

Making It Up is a fascinating book and an accessible one. Weiss has resisted the art historian’s compulsion to interrupt the flow of images with extended essays, instead allowing the photographs to “speak” for themselves. Staged as they are, in moments of near-communication, the images seem always on the verge of sound, even when they were captured in Victorian silence.