The Making of Her: A Novel 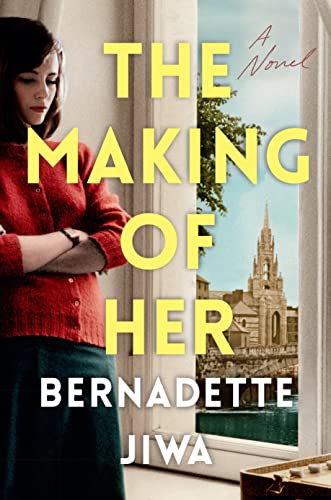 “tightly crafted women’s fiction, with a sensitive look at love, conscience, and loyalty.”

Joan and Martin Egan might have had a charmed life, but the cracks in the veneer of their marriage start to show when a letter arrives at their Georgian home in Dublin, bringing the couple’s secret to the fore and changing the life they don’t so much live as pretend. Theirs might have been a story-book life, were the fifty-something year old Martin not a slave to his family business and under the long shadow of his snob of a mother, with whom Joan and Martin live in her posh, Grove Square home, where Joan keeps a lid on her feelings because she came from Dublin’s impoverished estate housing and is never allowed to forget she married up.

In two timeframes and five parts, debut novelist Bernadette Jiwa weaves the fallout of a fateful choice Joan was pressured by Martin to make before their marriage, rendering their now two, grown daughters unaware of each other. The story unfurls in three points of view as the ramifications of that choice come back to haunt in urgent, do-or-die circumstances.

It is 1996 Dublin, and Carmel—the twenty-something-year-old daughter of Joan and Martin Egan—works at her family’s prosperous hardware business and is beginning to find her wings, now that she lives on her own. Considered by all a daddy’s girl, she has an inexplicable, contentious relationship with her aloof mother that, unbeknownst to her, has everything to do with Joan and Martin’s well-kept secret.

Emma Hudson is 30 years old and lives in London. A maternity ward nurse married to a doctor, she now spends all her time at the hospital because her young son has leukemia and needs a bone-marrow donor. Long aware she was adopted at birth, Emma knows the names Joan Quinn and Martin Egan appear on her birth certificate, but never considers contacting her birth parents. Until now.

In compelling hindsight, Joan revisits her unhealed story, that her falling for the privileged Martin when they were teens resulted in her falling pregnant, that 1960s Ireland was no place for such a fate, that she was “one of the lucky ones’ for Martin having stood beside her, that the caveat of their eventual marriage included the baby she’d named April’s adoption, which Martin arranged without Joan’s full compliance because what would people think? Joan recollects, “They’d barely even talked about April in the years since giving her up for adoption. It was less painful to believe they had given her up for her sake than to admit they’d chosen to give her away for theirs.”

When Emma’s letter arrives at the Grove Square house, “Joan had the sudden and odd realization that the letter was twelve years late.” She’d expected such a letter when the young woman, now named Emma, turned eighteen. “Now, finally, here was that long-awaited letter from her daughter searching for her birth parents.” Joan hesitates to tell Martin, and their chasm deepens. “The few occasions over the years when Joan had voiced her doubts about guarding their secret had sent him into such a frenzy that she’d stopped raising the subject.”

In uncharacteristic bravery, Joan defies Martin’s wishes and begins communication with Emma. When she tells Carmel she has a sister, the two travel to London to meet Emma, and Carmel begins to understand the cause of her mother’s distance, even as it starts to unravel her close relationship with her father.

The Making of Her is the poignant story of a woman once uncourageous and fearful of the harsh opinions of social standing, who follows her heart against all odds and chooses again. It’s tightly crafted women’s fiction, with a sensitive look at love, conscience, and loyalty. It holds a mirror to the restrictions of the past, and casts a light on the progressive, societal shift of modern times.