Make Your Home Among Strangers: A Novel 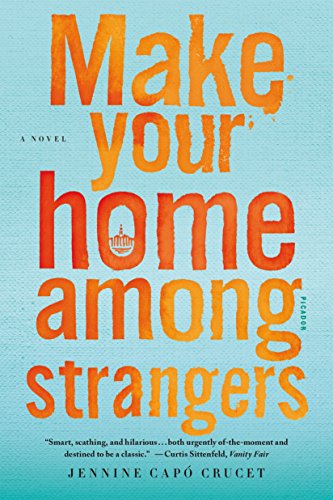 Being a first-generation American college student is hard enough, but when you throw an international immigration battle right in the middle of your neighborhood, life can get absolutely chaotic. Lizette is a typical Cuban American girl living in two cultures when life intervenes in a very real and startling way.

Novels about immigrant families usually contain themes of conflict, and Make Your Home Among Strangers is no different. But here, Lizette not only struggles with her own sense of identity but also a broader issue of home in the form of the fictionalized account of a political asylum case along the line of Elian Gonzales.

The novel opens with Lizette leaving for college—the first one in her family—and her mother moving to a new apartment after a divorce. Things are crazy but still normal for a family going through such upheavals, at least in the beginning. But soon a Cuban boy arrives in Miami on a raft, his mother dead on arrival, and the entire city is embroiled in a case making international headlines.

In this backdrop, Lizette has two big challenges, and both are equally hefty. Firstly, she has to bring up her grades, which have dropped because the challenge of a top tier university is vastly different than the one in her low-income high school. But perhaps even more troubling in that it is out of her control, is the Cuban boy’s asylum case, which is unfolding right outside her mother’s apartment in the form of protests, picketing, and reporters.

As Lizette struggles with her studies, a slightly patronizing university staff and white students who think of her solely in terms of her heritage, form obstacles she must pass successfully. At the same time, her mother, newly divorced and hungering for something other than her unexciting life, becomes involved with the asylum case in a way that her family and friends find horrifying. They all turn to Lizette—the smart one, according to her father—to bring her mother back to sanity before the political case turns truly ugly.

Like all immigrant stories, Make Your Home Among Strangers is more than the events on paper. They are about themes of identity and home. Lizette doesn’t realize how she is viewed by white Americans until she arrives at university: a women of color, a minority, someone who needs a push because they think she hasn’t had the same advantages in life. Her resentment at being viewed thus translates into a loss of confidence in her abilities as she questions her good grades, her teacher’s offer for an internship, even the intentions of fellow students who extend a hand of friendship.

Yet when she visits Miami she also feels out of place, because she is the different one, the one who strangers have heard about because she got a scholarship for an out-of-state university. Some in Miami are envious, others are hostile at what they perceive as a traitorous move. Her feelings come bubbling to the surface when she describes her mother, and we can see that it is her own mixed emotions at her cultural background she projects onto her mother:

“But spotting her before she saw me in the terminal – in that fake gold outfit, her face oily, her hands fidgeting with the rings on her fingers – had made my stomach turn, and I just wanted to be alone somewhere to catch my breath, to have a minute to sync up my idea of home with reality. I’d seen my mother in that moment as not my mother; I saw her as a tacky-looking woman, as the Cuban lady the girls on my floor would have seen, alone in an airport. And I did not like that I suddenly had this ability to see her that way, isolated from our shared history.”

Other gems in the novel are descriptions of Miami in general and Little Havana in particular. The sights and sounds of a subculture living in the midst of one of the most famous cities in the world are little gems for the reader. Equally interesting are the descriptions of the first generation young men and women—Lizette’s cousins, boyfriend Omar, high school friends, neighbors, even strangers in a Miami bar—who live in balance with two cultures without hating either one. For Lizette, it is a more difficult balance to find, but in the end perhaps she does.