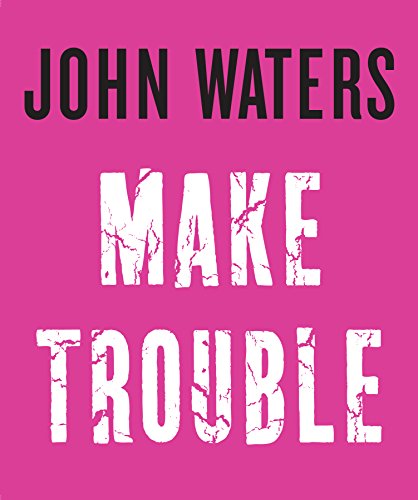 It’s become something of a cottage industry for publishers in recent times to take an address that a noted personage gives to a respected college or university and slap it between hard covers to sell it as a stocking stuffer for your family’s own graduate.

Notably, author Neil Gaiman suggested that those listening with mortarboards on their heads knuckle down after graduation and “make art.”

And now, in keeping with his brand, author/filmmaker/gadfly John Waters instructs his listeners and readers to “make trouble.”

Make Trouble, which is comprised of the full text of Waters’ speech to the graduates of the Rhode Island School of Design, along with some snappy illustrations from Eric Hanson, is an itty bitty 80 pages long, and what with those illustrations and the big (on some pages huge) print and all, it takes but a moment to read. And it contains a lovely mixture of wisdom and nonsense—just the thing, really, for the graduate who is about to face the reality of the repayment of the debts that he or she accrued in making their way through the School of Design.

As a means of introducing himself to his audience, Waters writes:

“I should say right off that I am really qualified to be your commencement speaker.

“I was suspended from high school, then kicked out of college in the first marijuana scandal ever on a university campus. I’ve been arrested several times.

“I’ve been known to dress in ludicrous fashions. I’ve also built a career out of negative reviews, and have been called the Prince of Puke by the press.

“And most recently a title I’m really proud of: The People’s Pervert.

“I am honored to be here today with my people.”

Note that the above comprises a full six pages of the book’s 80.

Which is not to say that the book is not worth owning.

Indeed, it is filled with a number of bits of advice that I wish someone had told me way way back when I was at graduation age. Or reminded me of along the way.

“So what if you have talent?

“You have to figure out how to work your way inside. Keep up with what’s causing chaos in your own field.

“If you’re a visual artist, go see the shows in the galleries that are frantically competing to find the one bad neighborhood left in Manhattan to open up in.

“Watch every movie that gets a negative review in the New York Times and figure out what the director did wrong. Or right!

“Watch people on the streets.

Or to be more succinct:

“Today my be the end of your juvenile delinquency, but it should also be the first day of your new adult disobedience.”

John Waters, of course, knows of what he speaks. He started by making cheap movies of the sort that he himself wanted, with characters who ate eggs—or shit—and tore down the Christmas tree after not getting the boots that they wanted.

His movies were banned, denounced, and, to be truthful, largely avoided by media and audiences alike. But in order to serve his own sense of adult disobedience, he kept making them, and, over the years, attracted mainline actors—from Tab Hunter to Kathleen Turner to Johnny Depp—to work with him. (This is, of course, to say nothing of the actors he made into stars—the divine Divine and Ricki Lake most notably—or of the other sorts of creative casting measures that he has taken—think Iggy Pop, Susan Tyrell, and, especially, Patty Hearst.)

In short, Waters advises his readers to be fearless, to be demanding, and to walk a life’s path that is suitable to the individual and his or her talents, one that, at the same time, forces the individual to overcome his or her fears.

Or as Waters himself puts it:

“Go out in the world and fuck it up beautifully.”

And there is very likely no better advice that a speaker can offer to a gaggle of graduates.

Make Trouble is an extraordinary text for those seeking to figure out what’s next for themselves, no matter their age. Indeed, were it to fall into the hands of enough of the newly retired, we might have something of a revolution on our hands.