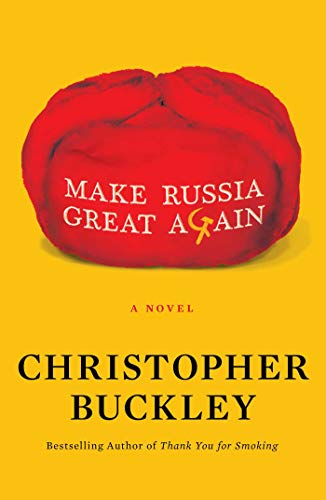 If you follow American politics with more than a cursory glance, and who doesn’t these days, it may strike you as odd that someone would try to write a novel of political satire set within and centered upon the Trump Administration. Would such an undertaking be at all possible given the many over-the-top characteristics of President Trump and the cast of characters that buzz in, around, and through this White House?

If satirizing current politics is at all possible, it would seem that Christopher Buckley, acknowledged to be the best living American political satirist of the last four decades, could be the one to pull it off. Make Russia Great Again affirms Buckley’s reputation. The dust cover of the book uses the hammer and sickle in place of the “G” in Great, while even the date of publication, July 14, may be indicative of Buckley’s approach to his subject.

The narrator of this insider’s tale is Herbert K. Nutterman, who held a series of positions in Trump’s hotel empire before becoming the seventh chief of staff in this administration in less than four years. The president calls him “My Favorite Jew.” Nutterman is writing from a Federal Correctional Institute where fellow inmates often ask him how he could have gone to work for “a man like that.” Nutterman is bemused that inmates in a Federal Correctional Institute had developed such a keen sense of “moral superiority.” Following this observation, Nutterman goes back to relate his appointment as chief of staff, and so the story begins.

The number of Trump imitators across the country these days must be in the thousands. The quality varies widely. The best of these capture gesture, intonation, pacing, vocabulary, and syntax. In live performance, body movement and facial expression are important elements, but, in the written word, it is in fact the word alone that marks success or failure. Word choice and combinations, misuse and misplacement, garbling, stumbling, and hesitation are important characteristics to capture. Christopher Buckley has honed in on Trump’s words as well as anyone could, maybe even better than the president himself.

If you took the presidential tweets and grouped them with other tweets, it would be relatively easy to identify which were authored by the Tweeter-in-Chief. However, if you were to add Buckley’s “Trump tweets” to the group, separation of the authentic from the fake would be nearly impossible. Some might conclude that Buckley has simply copied from the president’s twitter accounts. He has not.

At this point, a warning: While reading Make Russia Great Again, it would be wise to cut yourself off from all news and social media. The blurring of reality and fiction can be confusing and it often becomes close to impossible. Within which realm is your mind and memory operating? Did this happen or is it something from the book? Unless you are very careful, these questions will trouble your perception and your sense of mental balance.

The main plot of the story concerns the Russian election in which Mr. Putin is narrowly defeated by the Communist Party candidate in the first round of polling; much to everyone’s surprise and amazement, including President Trump, his national security staff, and Vladimir Putin. It turns out that the United States has inadvertently hacked the Russian election.

There is a top secret computer platform called “Placid Reflux” that was programmed to retaliate in kind to any attack from the outside. Because the computer accepted the intelligence community’s view that Russia had interfered with the 2016 presidential election, it retaliates at the next opportunity to do so. “Placid Reflux” could not be turned off, but could turn itself on, and it did so when it failed to get instructions on what to do with the Russian elections. The lack of directions leads “Placid Reflux” to assume that the president had been neutralized. From here, it gets more complicated as a cast of Russian and American characters become players.

The novel is full of great personalities. The Trump supporters at FOX news are legion and barely disguised from the originals. Seamus Colonnity is number one at Fox. Nutterman describes him as being able to produce a wall of talk by speaking for hours without pausing to take a breath. Colonnity seems to enjoy fawning over the president, while others only fawned out of fear. In return, the president admires Seamus and freely borrows from the avalanche of insults Colonnity dumps on the president’s enemies.

Katie Borgia-O’Reilly is another of the president’s stalwarts who had been with him from the start of the 2016 campaign. Nutterman found her “sexy” in a “creepy” kind of way, and is impressed by her ability to take “going low to new heights.” Katie’s husband Jerome “Romy” O’Reilly has a Washington law practice and spends his spare time disparaging the president.

Other figures of note are the Chief of Communications, Greta Fibberson; Vice-President Pants; and, a rather pathetic figure, the Senator from South Carolina, Squigg Lee Biskitt whose Trump-given nickname is “Buttplug.” Trump’s inner circle seems to be in constant fear of the boss.

The plot rolls on and gets more complicated and absurdist as the second round of the Russian election approaches, and “Placid Reflux” is still operational. When the president is finally told of the existence of the rogue computer, he comes up with a solution to the problem that drives the crisis into deeper territory.

Ultimately, the issues get resolved; Russia is saved from the Communists by Putin and he will Make Russia Great Again. Among the key players on the Russian side of the story is Oleg Pishinsky, whose industrial empire traffics in human organs and controls the deadly chemical Novichok referred to as “Oil of Oleg.” Oleg’s relationship with Donald Trump goes back to the Miss Universe Pageant in 2013 where Trump gave private personal attention to each of the contestants. Oleg’s videos from the event add to one of the subplots. The two men also bonded over their fetishizing of gold.

In the end, all works out for Putin and Trump, although not for Herb Nutterman who receives a nine-year sentence, nor for Oleg who ends up dead by torpedo. Others lose their jobs and become consultants, or end up in Siberia. As Nutterman is writing this memoir, Don Jr. is prepping to become President of the United States by non-conventional means. He will Keep America Great.

To some degree the plot is beside the point. What makes this novel so much fun is Buckley’s ability to capture Trump and replicate nearly everything inside the Washington swamp.