Make Peace Before the Sun Goes Down: The Long Encounter of Thomas Merton and His Abbott, James Fox 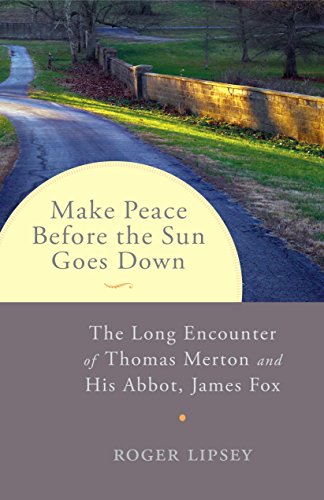 “There is still something I have not said: but what it is I don’t know, and maybe I have to say it by not saying.”

This note by Thomas Merton to himself appears near the end of Roger Lipsey’s Make Peace Before the Sun Goes Down: The Long Encounter of Thomas Merton and His Abbott, James Fox, but the note serves well as an introduction to this deeply researched, flawlessly written, riveting account of a very difficult relationship.

Thomas Merton entered monastic life at the Abbey of Gethsemani near Bardstown, Kentucky. It was 1941 and Merton, aged 26, flourished under the formative influence of the beloved abbot, Dom Frederick Dunne. In particular, Dom Frederic encouraged Merton in his writing of The Seven Storey Mountain. That bestselling classic, published in 1948, brought fame to Merton even as he continued his monastic life with its vow of silence (although sign language and, in limited situations, speech were permitted). When Dom Frederic was the first to give Merton a copy of this book, Merton “knew that he was happier about it than I ever could be.”

Unfortunately, Dom Frederic died unexpectedly in the same year as the publication of The Seven Storey Mountain. The new abbot, Dom James Fox, was Irish and born to the Catholic faith (unlike Merton who converted).

Brilliant, he attended Harvard College on scholarships, graduated in three years with a Phi Beta Kappa key, and went on to complete his education at Harvard Business School. Finding the subsistence economics of the monastery inadequate to support its needs, Dom James enlarged the production capacity and made significant profits from selling cheese and fruitcakes in the marketplace. The medieval quiet of the 2,000 acres was transformed with the noise of tractors and other machines that Merton could barely tolerate.

Merton considered leaving the Cistercian Order with its valuing of ora et labora (work and prayer) for the Carthusian Order in which the silence, prayer, and solitude made the monks like hermits. “When I am alone,” Merton wrote to Dom James, “Jesus is with me at once.” Dom James certainly didn’t want Merton to leave the order and sought to persuade him that his needs could be met at Gethsemani.

This frictive pattern of Merton desiring and Dom James dissuading would be repeated numerous times over the two decades of their relationship. Even Merton’s wish for solitude in the forests and fields of Gethsemani required the approval of Dom James and led to Merton writing to Dom James such things as “the two hours . . . when you let me go out into the woods, were two of the happiest hours I have ever spent in my life.” That Dom James could deny Merton the solitude so longed for showed Dom James’ focus on community and desire to control what he considered in the best interest of the Abbey and the monks.

Merton’s fame also caused problems with Dom James who wrote, “He is all for solitude and anonymity, and yet he keeps on writing with a view to books being published someday, etc.” Dom James asked Merton to stop keeping a journal and, for a time, Merton complied.

Dom James’s attitude is made abundantly clear in another missive sent to Merton’s agent, “When he writes again, he must think of it as an obedience of monastic and religious life imposed by God through his Superiors, rather than something he has obtained permission for himself.”

Dom James refused to allow Merton to travel or participate (other than by correspondence) in the larger life that Merton’s depths, talent, disposition, and fame opened for him. Referring to 1965 but stating a repeated reality, Lipsey writes, “Merton’s superiors were bombarded . . . with requests for him to travel to speak, to participate far and wide.”

In a particularly distasteful episode, Dom James conspired with Dr. Gregory Zilboorg, a recent convert to Catholicism, to bring Merton into analysis. Zilboorg, a well-known psychotherapist with many famous clients, had accepted Dom James’ view of Merton as a neurotic prone to spiritual injury because of his unconscious quest for celebrity. Distance, fortunately, prevented this “analysis” from ever pretending to begin.

Nor did Merton always turn the other cheek and conceal his anger and outrage. Dom James, writes Merton, “is the very incarnation of New England middle-class, efficiency-loving, thrifty, crafty, operating, sanctimonious religiosity.”

Yet at the heart of this fascinating relationship is a mystery. Lipsey warns us early on that this is a relationship of nuances. For 15 years of their connection Merton served as the confessor for Dom James. As Dom James aged, he too found much attraction in the hermit’s life. Could this have been the influence of Merton? At last Dom James allows a hermitage to be built for Merton at Gethsemani.

Surprisingly, toward the end of his service as Abbot, he also allows Merton to visit New York City for two meetings with the leading exponent of Zen, Dr. D. T. Suzuki. Merton, who had been studying Zen for a decade, “met in Dr. Suzuki, at last, a living spiritual father—an abbot in all but name with whom he felt instinctively at home.”

Lipsey, author of Angelic Mistakes: The Art of Thomas Merton and, most recently, the magisterial biography Hammarskjöld: A Life, takes on the challenge of showing what Merton had to say “by not saying.”

Why any of us endure certain difficult relationships, with both deficits and gains, can be perplexing. As for the mystery of Merton and Dom James, let’s allow Merton the final words: “. . . our life here is too much of a lie. If that is really the case, then, since I can’t do anything about it, I had better leave. But always the question remains: perhaps it is I who am the liar and perhaps leaving would be the greater lie.”