The Maid's Daughter: Living Inside and Outside the American Dream 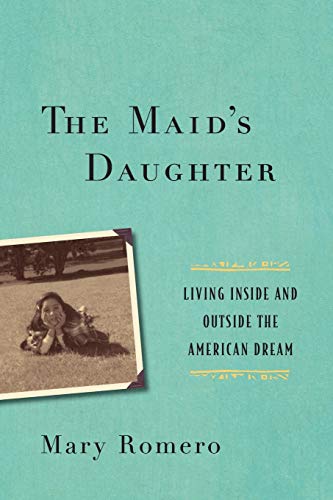 “The Maid’s Daughter: Living Inside and Outside the American Dream is a riveting read for both academics and laypersons. This thoughtful and fascinating book is a result of intensive interviews and research spanning over two decades. . . . Author Romero has successfully encapsulated the plight and struggles of domestic workers and given the reader a great deal to contemplate.”

How does a young girl born in Los Angles but living her first few years in Mexico come to terms with establishing a self that is whole and complete while being shuttled between diametrically opposed cultures?

Few contemporary Americans can relate to the experience of being wedged between two cultures that are polar opposites in terms of class, structure, and language. As the cultures clash at every turn, the struggle to accomplish an identity is incomprehensible to many.

The Maid’s Daughter: Living Inside and Outside the American Dream is a riveting read for both academics and laypersons. This thoughtful and fascinating book is a result of intensive interviews and research spanning over two decades. Author Romero is uniquely qualified to extrapolate the critical points in each interview, examining the meaning of each person’s comments and feelings.

Ms. Romero demonstrates her depth of expertise not solely because of her credentials as a Professor and Faculty Head of Justice and Social Inquiry at a major university. Equally important to the fundamental success of the study is the respect she commands as a Latina interviewer who cares deeply about each character, listens without judgment, and is able to clearly identify their struggles—while simultaneously remaining objective. Ms. Romero delicately reconstructs the lives she studies as part and parcel of a larger social context that makes sense within the American hierarchy of class structure.

The critical people in The Maid’s Daughter: Living Inside and Outside the American Dream are Olivia and her mother Carmen, who are provided food and shelter in exchange for domestic chores in various privileged families. Much of the book is told through Olivia’s voice, providing an emotional connection for the reader almost immediately.

Through Olivia’s powerful voice, clarity of thought and wisdom far beyond her years, we are allowed to vicariously live with Olivia throughout her young life—a life of hardship, rage, cognitive dissonance, and unending search for identity.

Though Carmen and Olivia’s real names are masked to protect their anonymity, the reader becomes so familiar with their psyches and conversations that after awhile, they begin to feel like beloved friends or family members. Such is not the case with Carmen’s various employers even though they have their frailties and issues that we begin to understand as the book progresses.

One of the main sources of confusion for Olivia in living in the maid’s quarters with her mother for much of her youth is the periodic treatment of her as a family member but not without an underlying tone of paternalism or racism. Though she is periodically treated to shopping expeditions or an outing at the country club with their kids, Olivia is inevitably treated as “the other”—the proverbial outsider.

Each of Carmen’s employers belong to upper class, sheltered families that have no sense of the racial and class stereotypes and attitudes requiring strict adherence in their daily attitudes. And as these attitudes are inculcated into the minds of their offspring, the cycle continues to be one that is difficult to penetrate.

While all the domestic workers in Carmen’s immediate vicinity raise children of these privileged families, perform all the chores, and provide emotional support to the parents as well, the workers themselves are often relegated to remaining anonymous in the shadows of the maid’s quarters separated from the rest of the household. Due to the limited time available for non-work related activities, the children of workers unfortunately are deprived of that same nurturing and parenting and are often left solely with a monetary relationship with their mothers.

As a result, the children begin to rely on extended family members or older kids. Eventually they are recruited to help with chores as well which leaves little time for homework, sports or other outside activities. Being forced to play with the employer’s kids is awkward at best and children like Olivia begin to resent the complicity of their parent in what they view as disrespect for and manipulation of their parent by the employer.

Olivia herself endures degradation as well. During a party at one employer’s house, the guests throw pennies on the floor and expect her to pick them up. This experience was one that taught her very quickly that she was truly an outsider in foreign territory. She was constantly treated as “the other,” teased about her accent, and never felt safe. The rules of each family were different and thus, the way she was expected to act was always in flux. Olivia’s bosses molded both her behavior, clothing style as well as planned her educational options and she was expected to comply with their wishes.

As she matures, Olivia develops her own ideas many of which are at odds with her mother’s employers. Being wedged between privilege and poverty, she begins to feel alienated from each side of the fence. She feels a part of the Mexican community in Los Angeles; however, the disparity in their life experiences creates distance from them as well. Although she successfully “passes” at times in her youth, that same behavior prevents her from expressing her Mexican working class roots, though eventually she does embrace her “Chicana” identity. Though one of her mother’s main employers tries to persuade her to date white men and leave her culture behind in order to succeed in the world, Olivia revels in being herself and pursuing her goals regardless of their feelings.

As her activism grew into adulthood and college bound to UCLA, she continues to experience internal conflict about both wanting success and middle-class comforts and at the same time wanting to erase her material desires. The resulting identity that ultimately forms is that of a complex mix of all her experiences. In the end, Olivia thrives as an empowered professional with children she adores.

While The Maid’s Daughter: Living Inside and Outside the American Dream is an emotionally draining book at times—the reader is witness to the abusive treatment of others—it is well worth the depth of experience and knowledge one gains by reading it. The intensive research is impeccably presented in perfect sequence with logical conclusions. Each interview is compelling in both its content and topics for exploration. Author Romero has successfully encapsulated the plight and struggles of domestic workers and given the reader a great deal to contemplate.