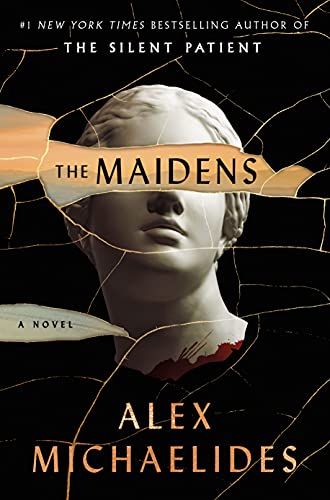 “The Maidens is an intricately plotted, mystery-thriller for the discerning reader. It’s an atmospheric story set on Cambridge University’s campus merging cliff-hanging twists with artful suspense.”

Mariana Andros is a 36-year-old, grieving widow. She is 14 months past the accident that killed her husband, Sebastian, on a beach in Greece while on holiday. A practicing group therapist, she continues to live in the yellow house she shared with Sebastian on Primrose Hill in Northwest London. “But in many ways, Mariana was still there, still trapped on the beach in Naxos, and she would be forever.”

Having met as Cambridge University students, Mariana and Sebastian had a marriage of opposites. “In contrast to Mariana’s privileged upbringing, Sebastian was brought up with no money.” They met when they were both 19, and “In many ways, Mariana’s and Sebastian’s lives began when they found each other.” Mariana believed their love would go on forever, but “Looking back was there something sacrilegious in that assumption? A kind of hubris?”

Mariana came to England at age 18 to attend St. Christopher’s college in Cambridge. She grew up in Greece, on the outskirts of Athens with her sister Elisa, who died with her husband in a car crash, leaving the married Sebastian and Mariana as surrogate parents to Zoe, who is now a Cambridge student. Mariana fears she has lost touch with Zoe. “Their relationship had been imbalanced ever since Sebastian’s death, and from now on, Mariana was determined to correct that balance.”

When Mariana receives a phone call from Zoe and learns something is dreadfully wrong, she packs a bag and immediately leaves for Cambridge by train, where she meets a student named Fred, who is pursuing his PHD at Cambridge, and quickly pursues Mariana to the point of being a pest.

Mariana gets off the train and approaches the prime setting of The Maidens. “And now, as she grew closer and closer to St. Christopher’s, she found herself walking with increasing trepidation as the familiar streets made it hard to hold back the memories flooding into her mind—ghosts of Sebastian were waiting on every corner.” Mariana has her reasons for soldiering on. “She’d do it for Zoe. Zoe was all she had left.”

In The Maidens, Alex Michaelides excels in writing character as place: “Mariana had been afraid to see it again—the backdrop to her love story, but thankfully, the college’s beauty came to her rescue.” “As Mariana neared the college, her surroundings grew more and more beautiful with each step: there were spires and turrets above her head, and beech trees lining the streets shedding golden leaves that collected in piles along the pavement.”

An unidentified body is found in Cambridge, and Zoe suspects her good friend, Tara, is the victim. Within minutes of Mariana’s arrival to her Alma Mater, Zoe’s suspicions are confirmed.

Although planning to stay in Cambridge only long enough to console Zoe over the loss of her friend, Mariana becomes involved in the search for the murderer, when a chance encounter reunites her with Julian Ashcroft, her Cambridge classmate from 20 years before, now a celebrated forensic psychologist, who keeps Mariana apprised of the murder investigation’s findings.

Zoe considers herself a college outcast, and Mariana worries about her now that her best friend Tara is dead. As Zoe’s predicament at Cambridge becomes clear to Mariana, she discovers the thorn in Zoe’s side involves an elite group of girls from privileged backgrounds who occupy a high strata of scholastic standing, and at the core of this special clique, known as The Maidens, is one Edward Fosca, a sinister Greek Classics professor come to Cambridge from America.

By all rumors, dubious activity surrounds The Maidens, and Zoe confesses they’re a secret society to which Tara belonged. Zoe further confesses that Tara had come to her in fear of Edward Fosca on the very night she was murdered. Alarmed and intrigued, Mariana can’t resist taking the murder investigation into her own hands.

Against a thematic background of Greek Tragedy serving as a template to two more Cambridge murders, the one thing the victims have in common is membership in The Maidens. When Edward Fosca invites Mariana to his rooms for an intimate dinner, Mariana is reluctant, but also convinced that Fosca is the murderer. In the interest of further investigation, she accepts his invitation and finds disturbing evidence in his rooms to support her convictions. Not knowing who to trust with her findings, Mariana calls Fred and the two put their minds together in unravelling the mystery.

Tangled threads and uncanny alliances are woven throughout this off-kilter story. Interspersed throughout are confessions from a troubled, unknown narrator, on whom the lens of possibility shifts from one character to the next.

The Maidens is an intricately plotted, mystery-thriller for the discerning reader. It’s an atmospheric story set on Cambridge University’s campus merging cliff-hanging twists with artful suspense.