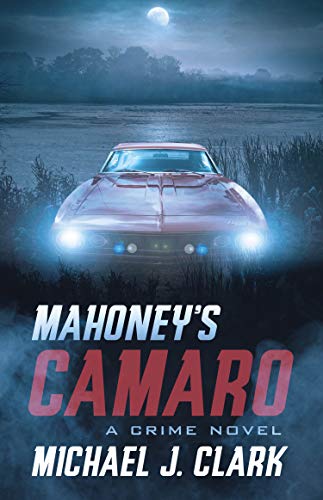 “A must-read book filled with action packed shenanigans, and a keeper for gearheads.”

Mahoney's Camaro is going to set aflutter the hearts of all car lovers and gearheads, especially the bunch who in their youth cruised Detroit's Woodward Avenue every weekend in hot rods, customs, and muscle cars all the way from the Totem Pole to Ted's Drive-In and back again.

Author Michael J. Clark may very well have been one of them. He knows cars inside and out, front end to rear, and sprinkles his knowledge into the story throughout. Some of the cars he mentions are not made any longer but are still beloved and highly collectible:

Remember those? Be still, my heart!

This snappy, high octane mystery is set in 1985 when video rental stores could be found in every strip mall in North America, pagers were on their way out, answering machines were the hottest things around, and cell phones were just over the horizon.

Mahoney used to work at a Chevrolet Oldsmobile dealer, but was let go after the service manager accused him of stealing parts. The cops searched his place but didn't find any stolen property. The dealership fired him anyway telling every GM dealer in town that he had sticky fingers. Mahoney thinks he was fired because he'd been sleeping with the service manager's wife.

He's now a tow truck driver for a company called Hook Me Up. Working the night shift gives him plenty of opportunity to get to know the dregs of society, some of whom readers meet in the book. His job consists mainly of towing cars away from street crashes, hauling them out of lakes and rivers, removing abandoned vehicles from the streets, and helping motorists with lockouts. Some of his work is newsworthy, so he's hindered at times by media blockades of reporters who arrive on the scene before he does thanks to their constant monitoring of the emergency frequencies.

On this night, Mahoney gets a call at the end of his shift to head over to the North Main Red River boat launch. Winnipeg cops need a car pulled from the water. He gets the water logged automobile onto dry land, and ignoring the pair of hands handcuffed to the top of the steering wheel, is delighted to see it's a plum-colored 1967 Camaro. Just the car he needs to help bring the half-restored Camaro currently sitting in his garage back to its former glory. Mahoney contacts his car buddies and plans to be first at the upcoming car auction where he'll bid on the damaged car.

"The auction hall was a windowless, prefabricated metal building. There was a counter to get your bid number, a counter for payment, and the lunch counter, where the coffee and the French fry gravy duked it out for the thickness win on a weekly basis. . . The auction microphone looked like it came out of a 1940s' boxing match. . . ."

This character driven story is slow to get the plot started but ignites and kicks into gear around page 50 when Mahoney finds someone bidding against him. The competitive bidder is not a motorhead in the same manner as Mahoney. This one is being financed by someone who wants to destroy the car in order to destroy evidence of a crime.

Until then, readers will be entertained by Mahoney's wide circle of wayward friends, acquaintances, and co-workers and their snappy, street level conversations full of newly minted phrases and profanity decidedly not in the common lexicon, most of them crude, rude and lewd, and not meant for tender ears. Even so, they're darn funny, even laugh out loud hilarious, and extremely creative.

After Mahoney outbids his competition and takes possession of the cherished Camaro, the story turns into a fast-paced caper, a race to keep the car as well as to find the killer of the woman who was handcuffed to the steering wheel, the ghost of whom refuses to leave.

The many references to 1980s cars, culture, fashion, and music will delight readers who remember those years, but may be head-scratchers to those who are younger. In any case, Mahoney's Camaro is good fun. Don't miss Mahoney's mix tape list that follows the last chapter.

A must-read book filled with action packed shenanigans, and a keeper for gearheads.