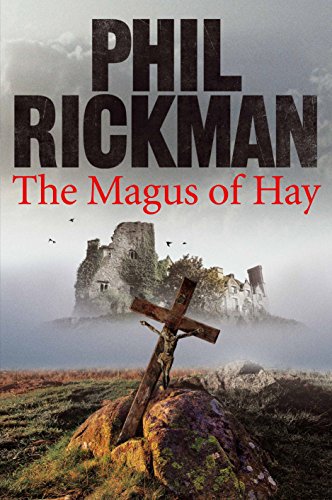 “Rickman’s writing style reflects his subject matter: spooky and indirect, elegantly crafted but always a sense of shadow behind you, that you’ve missed something you should have seen. It has a floaty kind of feel . . . a sense of hanging mist most of the time, stabbed by moments of clarity.”

In The Magus of Hay, Phil Rickman continues his eerie series about Merrily Watkins, parish priest, who also happens to be a “Deliverance Consultant”—i.e., Adviser on the Paranormal, i.e., exorcist—for a contemporary English church.

This volume, like its predecessors, presents two parallel investigations: one into a murder and one into associated supernatural phenomena. Or not. Even Merrily isn’t quite sure (“I still don’t know how any of this works”).

But that’s why the series works. It tackles the paranormal from a rational, today’s world viewpoint rather than dramatic fantasy, weaving it subtly and disturbingly into a credible tale. The book thus falls into the “crime” category rather than “horror,” even though some of the moments are downright unnerving.

Rickman’s writing style reflects his subject matter: spooky and indirect, elegantly crafted but always a sense of shadow behind you, that you’ve missed something you should have seen. It has a floaty kind of feel . . . you’re given just enough information to follow the story but always hanker for just a bit more to make things clearer. There’s a sense of hanging mist most of the time, stabbed by moments of clarity.

This book’s gnarly plot agglomerates ancient history of the England–Wales border region (Hay) and the rituals and esoterica of paganism, spiritualism, Christianity, chaos magic, and neo-Nazism. These form a backdrop for straightforward murder among a town whose economy is built on books.

It’s hard to believe someone can synthesize so much into a believable plot. Makes you wonder if Rickman ever sleeps, or instead lies awake at night trying out combinations in his head then writes them down in the morning.

In The Magus of Hay, the woo-woo elements are not as compelling as they have been in other volumes of the series, although they remain hauntingly credible and do support the crime investigation, which is often more interesting. In some places both feel either overdone, with cliffhanger-type scene or chapter closings, or underdone, with insinuation instead of action.

Throughout, the narrative is bleak, the characters all broken in some way. Whether they are just depressed, though, or spiritually crushed, or crippled, or simply worried, they seem to take it in stride. (“Nothing wrong with being vulnerable, insecure, paranoid,” one quips.)

The story appears drawn from two real facets of Hay-on-Wye. The town has become a sort of Book Capital of the World and once housed a bibliophile who proclaimed the town an independent state and himself as its king. Rickman, who lives in the area, remarks in the book’s Notes and Credits that “For reasons of credibility the eccentricity of Hay has been underplayed.”

Makes you wonder what else is going on up there, and what other mysterious, creepy, historical things the author will find to fuel future writings.