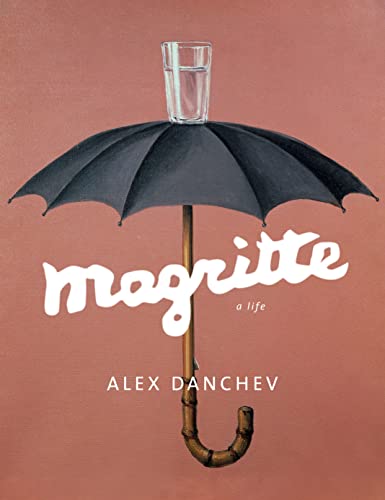 “. . . essential for anyone wanting to know who Magritte was, as a person, a painter, and a thinker.”

Alex Danchev opens his biography of the Belgian painter Renee Magritte with quite a claim: “Rene Magritte is the single most significant purveyor of images to the modern world.” What about Picasso or Matisse or Andy Warhol or Jackson Pollock or any number of artists whose images have become part of our cultural vocabulary, deeply embedded in our consciousness? The praise feels far too broad and while the book does an excellent job of presenting Magritte’s thinking about art and his evolution from quasi-impressionist to surrealist, it doesn’t convince readers of his absolute centrality.

Hyperbole aside, however, Danchev does succeed in describing both Magritte’s life and his art. Most artist biographies tilt toward one side or the other. It’s one skill set to write effectively about the impact seeing a painting has. It’s another to take the various moments of a person’s life and organize them into a meaningful narrative. Danchev excels in both aspects—and in balancing them into a coherent story.

He has amassed an impressive amount of original source material, quotes from Magritte himself (who left a lot of written reflections on art), from his wife, from friends and other artists. He starts with Magritte’s childhood, giving context for what follows. His description of Magritte’s mother’s suicide is carefully nuanced, not overly dramatized, an example of the middle path Danchev takes throughout the book. Far more details of daily life are given than is usual for this kind of book, from arguments Magritte had with friends to his trouble with dealers to his marriage and his depressing experience during the war. The life weighs as heavily in these pages as the art. Because, as Danchev convincingly shows, Magritte’s experiences deeply affected his work. His paintings reflected his life and thoughts rather than being a refuge or escape from reality.

Naturally, however, it’s the art that truly shines in these pages. The turning point in Magritte’s development as an artist was seeing the work of Georgio di Chirico. The shock of it moved him to tears: “my eyes saw thought for the first time.” He explored this in his own work, writing:

“What is necessary, above all, is to rid art of everything known up till now, every subject, every idea, every thought, every symbol must be put aside. Thought must completely detach itself from everything that we call logic and sense, completely free itself of all human constraints, such that things appear to it in a new light, as if illuminated for the first time by a shining constellation.”

This could be taken as a manifesto, explaining Magritte’s later “word paintings” in which the text belies the image, asking which one is real. Most people are familiar with the most famous of these, a painting of a pipe with the words underneath “This is not a pipe” (in French, of course). And it isn’t a pipe, Magritte would insist—it’s a painting of a pipe.

Magritte knew everyone: Picasso, Dali, Arp, Ernst, Tanguey, Miro, Breton. He moved in the circles that were defining the artistic culture of the moment. Danchev is convincing in showing his position in this group, one of the painters rethinking what painting was, what it could be. If Magritte comes off personally as a bit of a fussy shopkeeper rather than a rebellious outsider, that doesn’t make his artistic contribution any less interesting. This exhaustive book gives a clear sense of the life and work of an intriguing artist. No detail or event is too minor in Danchev’s eye. It is this level of information that makes this biography essential for anyone wanting to know who Magritte was, as a person, a painter, and a thinker.