Magritte: The Treachery of Images 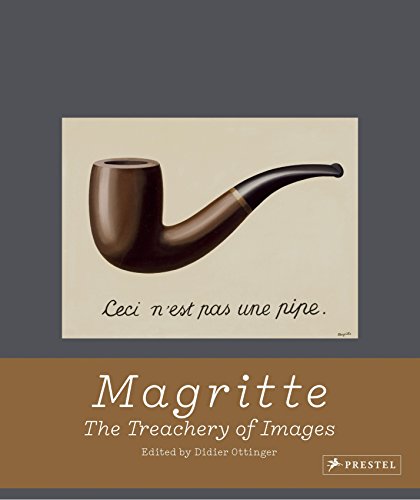 As one of the most internationally renowned artists, René Magritte (1898–1967) was also one of the strangest, a testament to his mastery of the surrealist style. His famous painting titled The Son of Man (1946), the one with a man in a suit wearing a bowler hat with his face slightly obscured by a green apple, the one that was mimicked in the 1999 movie The Thomas Crown Affair, is oddly omitted from this monograph. However, knowing that this book was created to accompany an exhibition meant to “interrogate the work of the Belgian Surrealist from a specific angle and, as a result, present it in a new light,” excuses the omission of such an aptly prominent example of the ideas presented in Magritte: The Treachery of Images. (The Son of Man, incidentally, resides in a private collection and is rarely seen in public.)

The title The Treachery of Images refers to another famous Magritte painting of a tobacco pipe with the caption “This is not a pipe” included as part of the design, which is the cover image of the book. From this vantage point, the reader is launched into a highly sophisticated crash course on philosophy, poetry, and the position of painting in the history of art theory via a collection of pedigreed essays.

With a cast of contributors including: Ottinger—Deputy Director of the National Museum of Modern Art, Centre Pompidou in Paris; Klaus Speidel—University of Vienna, Institut für Kunstgeschichte, Department of Art History, Ph.D. Philosophy; Jan Blanc - Professor of Art History at the University of Geneva, Dean of the Faculty of Arts, Ph.D. Art History; Barbara Cassin—a French philosopher and director of research at Johns Hopkins Robin Center for Research on Ancient Thought, and President of the Collège International de Philosophie; Victor Stoichita - Professor of History of Art at the University of Fribourg, Switzerland; Jacqueline Lichtenstein—French philosopher, art historian, and professor of aesthetics and the philosophy of art at the University of Paris IV—Paris-Sorbonne; and Michel Draguet—Belgian art historian, professor at the Université libre de Bruxelles and the curator of the Royal Museums of Fine Arts of Belgium; it is not a surprise that this book is deeply wedged into the realm of esoteric ivory tower rhetoric.

It is true that Magritte was an intelligent guy, interested in ontological questions such as: “What is an image?”, “What is light?”, “How does one define invisible?” And he created such bizarre paintings involving his thoughts on such questions which, in turn, lead viewers to make equally declamatory remarks: “What is that image?”, “What was he thinking?”, “Is this his idea of a joke?”, “What does this mean?” Likewise, after reading this book one will be left wondering still: “With all these academic contributors involved in this project, couldn’t one of them have used English to explain what is going on?”

If the word treachery is defined in the esteemed English dictionary as a violation of allegiance or of faith and confidence, and the word image is both a reproduction, imitation, or likeness of an object as well as a thought, idea, or concept then, in a nutshell, the writers could easily have said that Magritte’s artistic philosophy was based on his personal view that paintings of objects are not true representations of anything. Which Magritte himself concluded when he answered the “What does that mean?” question saying “It does not mean anything . . . it is unknowable.” Which is very funny that so many scholars debate round and round about Plato, Socrates, Pliny the Elder and the origins of this or that, when in the end, who knows what all the ideas, images, and thoughts really mean. Basically, the pipe is not a pipe, but it is a pipe, and it doesn’t matter which way one sees it. It would be treachery to look for further concrete explanations either in the paintings or in the essays.

The audience for this book is nebulous. It is not for the casual reader. Sentences such as “The surface of obviousness that freezes every image as a solution, as a proposition founded on its own uncertainty, is being broken by invoking the dual notion of indetermination and predetermination,” will send them packing. For the post doctorate art-philosopher-historian many of the essays are repetitive, citing the same information from the same sources making it difficult to tell what academic or historical insights are truly fresh or unique.

For a patient hobby art history buff this book may indeed deliver interest. It is well organized and the art reproductions are wonderful. There are nuggets of understanding buried in each of the essays if one can overlook how much work it takes to excavate. Mostly though, instead of presenting a “new light” on Magritte’s oeuvre, one is more likely to feel left in the dark by the academic discourse.