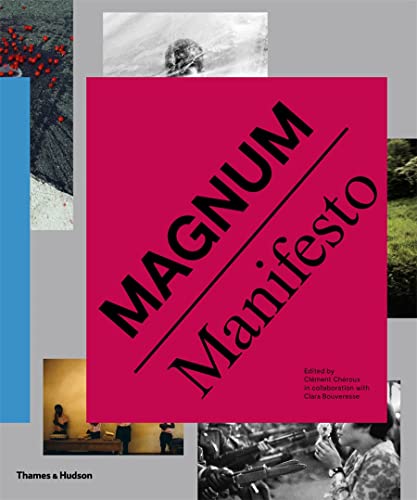 “an astounding compendium of photographs, a robust representation of art and journalism . . .”

The Magnum Manifesto is an astounding compendium of photographs. A robust representation of art and journalism that attempts to encapsulate all the events documented by its photographers since its inception in 1947 to the present, which is a nearly impossible task.

Magnum Photos is a collective, a photographic cooperative owned by its members, which was envisioned by Robert Capa in 1947. Capa was a war photographer, photojournalist, and writer. He covered the Spanish Civil War, the Second Sino-Japanese War, World War II, the 1948 Arab-Israeli War, and the First Indochina War. He was the only photographer landing on Omaha Beach with the troops on D-Day.

Magnum was founded by photojournalists with high ideals. Henri Cartier-Bresson, one of its founding members, voiced it as such, “Magnum is a community of thought, a shared human quality, a curiosity about what is going on in the world, a respect for what is going on and a desire to transcribe it visually.”

Currently in the early 21st century, when we are so engulfed in a constant flood of disposable images—from the Internet and television—heartfelt or absurd or depraved, it is hard to imagine the world of 1945 where reportage of photographic images was held in such high esteem and seen as uniquely revealing, especially in the wake of World War II.

Magnum attempted primarily to show what was occurring in the world from an international perspective, and a human rather than nationalistic point of view. The diversity of the founding members Robert Capa (Hungarian), David Seymour (Polish), Henri Cartier-Bresson (French), George Rodger (British), William Vandivert (American), Rita Vandivert (American), and Maria Eisner (Italian) is amply reflected in their chosen subject matter and emphasis.

Ever since the invention of photography the natural instinct has been for people to photograph other people and life around them. Photographers practiced that imperative with view and box cameras for many years, but that impulse became super-charged with the invention of the 35mm camera and its commercialization in 1925 with the Leica. By the end of the Second World War the 35mm camera, so intimate and ultimately portable, had only existed for 20 years and already documented the major events of the day—events that would shape the lives of people around the globe.

Perhaps no other photo collection articulates the power of the 35mm camera than this Magnum volume. At nearly two-inches thick, the book is encyclopedic, gorgeously printed on medium weight paper by Thames & Hudson, and impressively bound in hardcover. The quality of the photographic reproduction is superb and flawless, with exquisite tonal ranges, nuanced color, and deep blacks.

The breadth of topics covered in this tome is mind-boggling: from human interest, to wars, to politics, religion, celebrities and famine—it is all there. Also included are contact sheets, photo essays, individual and group projects, and facsimiles of magazine spreads and corporate projects.

Equally as fascinating as the photographs are the book’s essays that delve into what Magnum saw as its mission, its historical context, its struggle with gender equality, digitization of images, and its dichotomy in pursuing advertising and corporate work.

If there is any criticism at all it is with one section titled, Human Rights & Wrongs section (Part 1, 1947–1968), that lure the reader only to have photos that are too small in size to amply inform or sustain interest. The average image in that section is approximately 4 x 3 inches in size.

Robert Capa’s inspiration was critical in Magnum’s early years, but sadly Capa was killed in Indochina in 1954. However, his inspiration of what Magnum can be continues to be a touchstone for its members.

The Magnum Manifesto is an amazing collection of photojournalism and concludes with an Anthology, a revealing collection of notes and letters from a diverse group of Magnum photographers frankly stating their opinions and perspectives on what Magnum has become, and how it will develop into the future. If Magnum’s accomplishments are anything like its first 70 years, it will be remarkable.