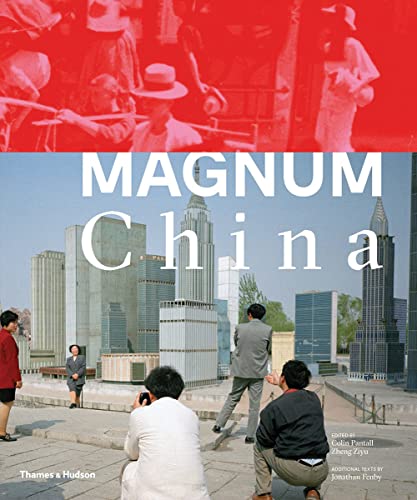 "All of the famous photographs of the period find reprinting in this history, as do many more less known but memorable, of an unending nation told through the lives and work of remarkable artists.”

The editors of Magnum China begin this massive volume with a dialogue on documenting the rise of modern China in images. A "typical street scene with a wealth of detail" but it is also an experience "between the subjects and the reader." (Ziyu) However, "are we often witnessing a performance" (Pantall) "that can unfortunately be considered to be historically accurate in nature (when they are not?" (Ziyu)

The book has four sections, then an arrangement of photographic essays by artist. A chronology and information on travels of individual photographers begins each section. The book also includes a map index.

Magnum China begins in the aftermath of the all-out Japanese invasion of 1937. The Nationalist government battled its former allies the Communists "while militarists continued to rule significant areas of the country" "and some of the richest and most advanced parts of China were concessions run by foreigners." "Much of the rest of the nation remained economically backward."

The China that emerged from World War II became a battlefield between "charismatic, ruthlessly ambitious Mao and 'the Confucian Fascist' martinet Chaing." Mao won for a variety of reasons and "proclaimed the People's Republic on 1 October," 1949, while Chaing moved his dictatorship on the island of Taiwan.

"The Communist Party still rules China under a leader whose power is often compared to that of Mao." In modern China, "as growth began to slow . . . there was increased attention to social challenges, environmental degradation and disparities that had grown up . . . including the urban-rural divide."

The editors quote photographer Marc Riboud that the Chinese do not mind photographers. Difficult times generate dark photographs but Magnum China also abounds in images reflecting something inherently brave, optimistic, and stoic. These engrossing photographs include the beautiful, exotic, and profane.

Naturally, the photographs center on specific themes. Robert Capa, for example, made "some memorable images of the dichotomy of the country in war time," while Werner Bischof covered "refugees who had fled to Hong Kong in the aftermath of the civil war in mainland China."

Bruno Barbey documented the opening to the West at the time of Mao's death "that create a human, but illusory, foundations for unchallenged power." Photographers had to work with constant official surveillance but still traveled to distant regions as with Lu-Nan exploring in Tibet. Such a subject could never get complete coverage, China is too big and too diverse.

All of the famous photographs of the period find reprinting in this history, as do many more less known but memorable, of an unending nation told through the lives and work of remarkable artists. It is a world now past as China continues to evolve but this work provides adventure, art, and historical record.