The Magnetic North: Travels in the Arctic 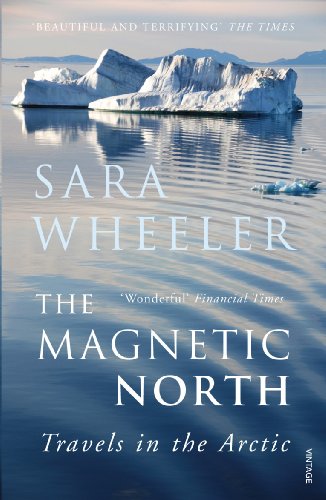 Some writers will go to the ends of the earth for a story.

Sara Wheeler did just that. Twice.

The Magnetic North, a chronicle of travels in the Arctic, follows Terra Incognita, her earlier book on Antarctica, published ten years ago. This time, Ms. Wheeler makes a counterclockwise journey starting in the (vast frozen wasteland) of Asian Russia, and continuing (intermittently) over a period of two years through Alaska, Canada, Greenland, Norway and European Russia. The result is a “crazy quilt” patched from history, personal experience and attention to the major issues of the area.

The title itself is a play on words. One can interpret it as a compass reading, or the “indefinable pull” that draws explorers, researchers and writers to its circle.

She sums up her intent by quoting T. S. Eliot: “To see beneath both beauty and ugliness; to see boredom and the horror and the glory.”

Ms. Wheeler is honest in relating history taken from published documents and tales drawn from folklore shared around a fireplace. While majestic in its vastness and incredible sights, the Arctic is no snowy Garden of Eden. Stories reveal man’s inhumanity to man, starvation; warring tribesmen; and the horror of the gulags. But, according to Ms. Wheeler,

“There was something indefinably redemptive folded up in the layers of Arctic mystery. Explorers, scientists, rogue writers—we are all on its tail.”

Unlike much of the writing about the area, which focuses on the writer and (mostly) his tribulations in survival, Ms. Wheeler focuses on the spirit of those who live and work above the Arctic Circle, and this is where her writing shines.

She has a clever, fast-paced style, and a very distinct voice. Descriptions are dense, rich and vivid. The area retains remnants of old hunting cultures, even though current generations are more skilled with computers than long-distance sledding. Anadyr, for example, is “a microcosm of the whole of Arctic Russia.” “A place where sequined trousers coexist with persistent, elemental toughness.” Later, she observes fancy nylon panties hanging on a line next to seal ribs that are curing.

When describing her travels in Canada, she speaks of a blog used frequently by an Inuit bear monitor who accompanied their research team. It is one of many examples of how people are being swept along by advances in technology. This requires education; education requires a non-nomadic lifestyle; technology requires money for purchase of computers and equipment. The dilemma and the drift away from traditional ways—whether gradually or at great human cost—goes on and on.
Her story includes amazing observations of botanical adaptation, such as the Arctic poppy that takes two years to husband the energy to form a bulbil one tenth of an inch in diameter. “This,” she says, “is biological haiku.”

Life in the area above 66° is one of survival, mixed with elements of indomitable spirit, greed, and some humor. The latter surfaces frequently whether describing Siberia’s climate“ twelve months of winter; the rest is summer,” or the necessary adaptations to living on the permafrost. Take the simple act of disposing of a Pringles can at a research station in Svalbard: (Lid in one bin; paper in another; metal rim in light metal, etc., etc.).

This is an ambitious work that seeks to inform the reader about myriad complex issues—each of which can fill volumes. These include the fate of indigenous populations in all countries, the struggle for sovereignty, as nations scramble to maximize their “take” of everything from oil and gas (beaver pelts are a thing of the past), coal and even diamonds. Relating to climate change, she carefully seeks to understand and observe.

Included as well are stories of individual heroism (and buffoonery) of early explorers. Truly, in this regard history and myth are fused. Historic accounts of early explorers are interwoven with present day experience and research, which interrupts the flow of information in places.

Her own observations are accompanied by extensive research of scholarly and anecdotal writing done by explorers, historians and scientists, all of which is documented. Interesting photographs and illustrations augment this information, and would have been enhanced by captions, instead of a master list at the beginning.

The Magnetic North is valuable for the uninitiated and those who know something about the area. It is a chronicle of the past, and factually presents the implications for the future: history, journalism, science, and folktales—all together. In this sense, the book is educational, and serves as caveat to all who read it—if only we can learn from past mistakes and capitalize on what we do well.

In closing, the author quotes John Davis, Elizabethan navigator and pioneering scientist, who called the Arctic “the place of greatest dignitie” (sic).

To this, she adds, “Both polar regions appeal to something visceral in the spirit, especially in an era when we have lost contact with the natural world. . . . I loved the pared-down existence of polar lands and the grace of their peoples under pressure.”