The Magician: A Novel 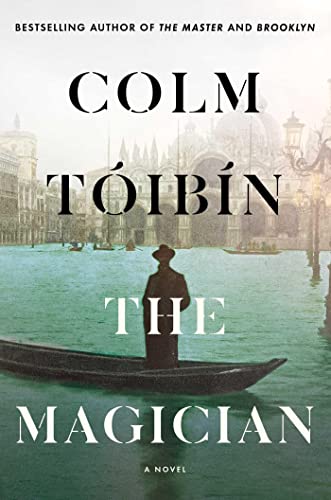 “The real magician here is Toibin, who conjures up the complexity of the times and a rich cast of characters.”

In The Magician, Colm Toibin tackles a big subject, the life of Thomas Mann, the Nobel-prize winning author. Starting with Mann’s childhood in Luebeck, Germany, Toibin presents Thomas as conventional, almost stuffy, especially in later contrast to his assertive wife, and his headstrong, opinionated children. Thomas himself doesn’t make decisions; they’re decided for him by others, his wife, children, publisher. Despite this, Thomas becomes the most famous German author of his generation, one of the most famous in the world. Toibin describes the role Thomas played in the roiling politics of his time, along with the story of how he became such an important author and cultural figure.

Thomas’ development as a writer is beautifully compared to music, a theme that threads throughout the pages. As Thomas watched Gustav Mahler conduct an orchestra, he recognized the parallels with his own work as a writer:

“What he [Mahler} was looking for, his movements suggested, would not be achieved by large gestures. Instead, it was about raising the music from nothing, having the players become alert to what was there before they started to play. Mahler, as Thomas watched him, appeared to be trying to lower the intensity of the playing . . . as if he were pulling the music towards him . . . This was, Thomas thought, like starting a chapter, then erasing sentences, beginning again, adding words and phrases, taking out others, slowly perfecting it so that, whether it was day or night, whether he was tired or full of energy, there was nothing more that could be done.”

Thomas drew on the people he knew, personal experiences that were transmuted into characters and plots in his novels and short stories. Of his first book, Buddenbrooks, Toibin writes:

“Thomas understood that while the book was based on the Manns in Luebeck, there was some source for it that was outside of himself, beyond his control. It was like something in magic, something that would not come again so easily. The praise he received also made him realize how much the success of the book masked his failure in other areas.”

This “magic” is part of what earned Thomas the nickname The Magician, though his children are the ones who dubbed him that, for the tricks he showed them (such as the disappearing thumb).

All of this writing—and the family dramas that play out—are set against the backdrop of the two world wars, the seismic shift in Germany as a country and a culture. In Thomas’ childhood and as a young man, he saw Germany as the height of cultivated civilization, the home of exceptional music, writing, and culture. In fact, he understood the reason for the first world war as:

“The other countries hated Germany and wanted it defeated. That would be the cause of war, he thought. And Germany had become powerful not only in its military might and its industry, but in its deepening sense of its own soul, the intensity of its somber self-interrogation . . . Germany’s singularity . . . her very cultural strength caused her neighbors to isolate her.”

This German “superiority” would become corrupted by the Nazis. The big tragedy of Thomas’ life, as drawn here, is the loss of his country, the disappearance of a way of life, of values that, once erased from Germany, appeared nowhere else.

As an important literary figure (especially after he won the Nobel prize), Thomas knew he should use his position to address the political situation, the ugliness of fascism, but he recognized early on that “He presented himself to the world as a man of principle, but instead, he thought, he was weak.” While his brother and his children took public stands against fascism, Thomas remained quiet, ostensibly to protect his publisher, his family, his friends.

This is not the story of a literary hero. Rather it is about a writer who was born into one era, was forced to live in an entirely different one, and found no way to reconcile the two. The real magician here is Toibin, who conjures up the complexity of the times and a rich cast of characters. Thomas Mann may be the ostensible subject of the book, but the demise of German culture is the theme.