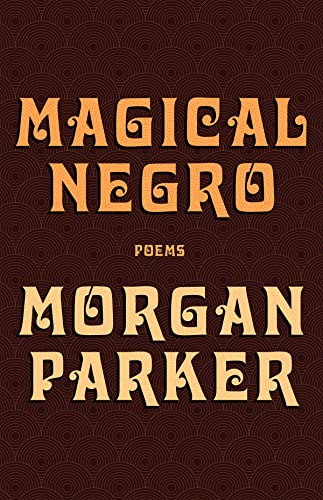 “Its exercise in deeper sight works like a certain clairvoyance, as you realize the dancing you heard before, was the sound of feet trying to run from oblivion, to save themselves by proving they matter, something no people should ever have to feel forced to prove.”

Read Magical Negro front to back. Be quiet. It is not yet your turn to speak.

Read it again, back to front now, and out loud. Did you hear that? Go ahead. Cry.

Don’t think that just because you’ve read Morgan Parker front to back and back to front, you know anything about racism or about white privilege or about what it feels to be black in America if you are not.

It is your turn to speak now, but you’ll give it up because now you know enough to know that you know nothing. Because you’ve experienced true poetry and want to be with it in silence. Because you’ve heard what light sounds like.

Morgan Parker follows up her critically-acclaimed There Are More Beautiful Things Than Beyoncé, with Magical Negro, a lush, sharp symphony of updated thought on being black in America and what all that heritage means to the conversation the black community is having about the way forward amid the still unresolved issue of an America that refuses to fully acknowledge them as equals, and maybe more importantly, rejects the contributions of black culture and black Americans, ascribing to them a false notion of “foreigness” or otherness, as reflected in these lines from the poem, “The History of Black People”:

“If you cut open my heart, it would be midnight

at the greatest party of all time: a miniature

But that’s their problem, Morgan Parker seems to say by having Magical Negro speak, first, to black people. In touching themes of cultural patrimony, history, sex, art, fashion, biology (“the body the body the body”), and pop culture, it looks to partially quantify a great inheritance, to make aware of it, as much as to express alienation, confusion and hurt, providing tools for participation in the conversation, for the defense of the great legacy bequeathed to black Americans, for the making right of history, as in the opening stanza of:

“I Feel Most Colored When I Am Thrown Against a Sharp White Background”:

“Or, I feel sharp white.

Quiet. Forget. My country is a boat.”

There is also much music and form in Magical Negro, and not just in the elegies to Diana Ross or Eartha Kitt, but in the construction of the album that is this book, every poem a new rhythm drawing on hip hop, musical anthropology, and the poetics of around-the-corner sociology.

“I am only as lonely

as anybody else, I say

my worth. It isn’t

summertime. At the end,”

Finally, there is sadness running through the subtext of these beautiful song-poems. (Are we tired of the fight?) As if Magical Negro sang what sounds like slow suicide by society happening before the eyes of generations. Its exercise in deeper sight works like a certain clairvoyance, as you realize the dancing you heard before, was the sound of feet trying to run from oblivion, to save themselves by proving they matter, something no people should ever have to feel forced to prove.