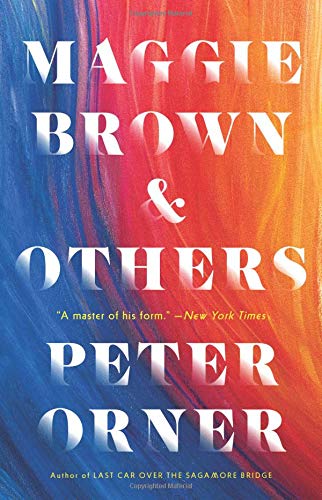 Maggie Brown & Others is a book of shorter-than-most stories that is finished off with a shorter-than-most novel, or novella. This is not flash, though things happen quickly, as if author Peter Orner meant to challenge himself along the lines of, How many words does it take to elicit emotion? How quickly, how succinctly, can I make a reader care about a character? The answer to both is, “very quickly.”

Take the opening story, “The Deer,” in which a young girl sees a deer escape a mountain lion, only to become stuck, trapped, in the middle of a rising

lake. The story, only a page and a half long, tells not only the story of that event, but also of the effect that suddenly being made an accomplice to death has on the narrator’s life:

“Even then it was more like an image, fixed, not a breathing deer out there in the water. So much of what she remembers became lodged this way. Something occurs, in the motion of the present, but it’s already over. Because even then, even as she watched, she was already moving away from it, already thinking how years from now she might tell someone about this. Someone who’s never seen this lagoon. The wind began to blow harder. The sun had long since fallen, but there was some light left. When she couldn’t watch anymore, when she picked her bike off the ground and rode away, the water had reached the deer’s chest, and still it had not moved.”

In every one of the 44 stories in this book the language is deceptively casual, easy. The characters are familiar, kooky in the way people we might know could be. The situations are not particularly strange. But all comes together into stories that are nevertheless unique, memorably sticking to the edges of memory for days or weeks after you’ve read them.

Memory itself plays an outsize role in this collection, possibly the only one element besides death that makes frequent repeat appearances as in this intimate scene from “The Apartment”:

“They reached his room.

And it was as if they crumpled into each other as they fell together to the carpet, groping, pulling, squeezing, unfastening—

And later, weeks later, how many he couldn’t have said—time being different now—he’d remember this, how after the two of them did finally stand up and make their way to his bed and stretched out on their separate sides, with only their feet touching, he listened to her, awed by the astonishing noises she was making. Every breath a death struggle, her neck muscles straining, as if just about to drown, she broke the surface of the water at the last possible moment.”

As short as they are, these stories might just be the opposite of flash in that they seem to stretch in time beyond the space they take up. The deceivingly simple word combinations and imagery have the effect of stopping time as if in the midst of that time lapse you stopped to take a look, a good look, before allowing the conclusion you know is coming as soon as you let it materialize.

The characters, too, have something to do with this. Everyday tragedies happen to them, almost as if they were so caught in the familiarity of their days that they are unable to change course even when they see misfortune looming. Then they, and we, watch it happen, understanding then, as we read, how every ill-conceived word and gesture, action and decision brought the characters (and us?) to that point.

“On the page where he’d found her hair, she’d underlined a sentence: ‘In the Bible the world is made out of nothing.’ In the margin, she’d written, Nothing? What about silence??? He spent the rest of the afternoon reading , careful that the strand didn’t drop out. He fell asleep reading, woke up to someone, nobody, calling his name.”

The last comma, there at the end of that passage, making all the difference, almost introducing a new story in and of itself, is a good example of what makes these stories stand out. (Wait. What did he mean nobody? Is he calling the person he’s with “nobody?” Not important? Is she nobody because she isn’t the woman who writes on margins?)

And therein might lie the genius of Maggie Brown & Others: In its ability to quickly show us our lives, sometimes holding a mirror to the most intense moments via a simple coma . . . and then slowing them down for us for long enough that we may feel them, ask ourselves some important questions.