The Madonnas of Echo Park: A Novel 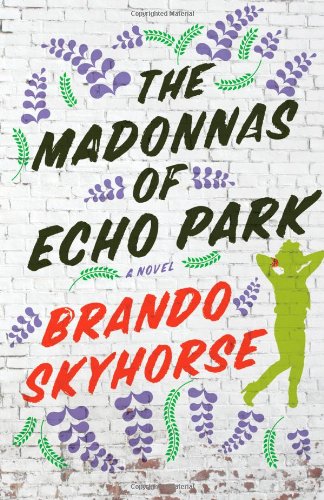 “A work of fiction is an excellent place for a confession.”

To be truthful, this is a collection of short stories with a common theme, not a novel. As author Skyhorse makes clear in the introductory author’s note (items which always take away more than they add to the reading experience), one of the stories is based on something that happened to him in grade school. At the time Skyhorse presumed that he was a Native American and, thus, refused to dance with a young girl because she was a Mexican. Since that time the author, who has worked as an editor in the publishing industry, has learned that he is primarily Mexican-American. This collection of stories, then, is intended to honor the culture—and the people—he once snubbed. It is an act of contrition, of penitence.

In the eyes of this reviewer, this collection worked a bit more than half the time but was not fully successful. On the positive side, Skyhorse gives life to people on the peripheries of Los Angeles who are often invisible. They are the house cleaners, the bus boys, the daily contractors who scrape along in L.A. without set plans for their future. Many of them are Hispanics (who have displaced African-Americans but themselves are threatened by newly arriving Asians) from Mexico or Mexican-Americans born in the U.S. As Skyhorse makes clear, these are the people who take buses to work across the great expanses of L.A. and their lives tend to be at the mercy of factors beyond their control.

“The areas around St. Vincent and MacArthur Park are Latino; Mexican, some Salvadoran. A new influx of Koreans hit the area several years ago, but there aren’t enough of them yet for tension.”

The short tales are interesting and constitute relatively fast reading. But this reader did not find the boldness, the vividness in the telling that some have focused on. If anything, Skyhorse too often writes in the style of Junot Diaz and Oscar Hijuelos, as if starkness and drama and scenes that are a bit too descriptive—and occasionally disorderly—are essential to Hispanic writing. This is offered as a critical point because a number of the tales were just this side of charming, and that charm was lost in the translation to grittiness.

Hispanic readers—and most especially those who have lived in L.A.—are likely going to see these tales as non-exceptional reflections of real life. This is fine, but it’s hard to expect that most non-Hispanics will relate to them except as curiosity pieces. And while Skyhorse pays tribute to Mexicans/Mexican-Americans, he also in one particular story shows that there can be troubling differences, and real anger, between the two groups. This was a bit troubling even if it reflects reality—the laundering of dirty cultural linen in public.

Some readers may be put off by the round-robin nature of the tales that cross-reference each other in terms of characters and situations. What seems at first cute becomes a bit tiring after the first hundred pages. The most troubling issue for this reviewer, quite surprisingly, had to do with editing. Mentioned repeatedly is the fact that the Mexican-American residents of Chavez Ravine were forcibly evicted (and their homes destroyed) in the early 1950s to make way for what would become Dodger Stadium and the LAPD Academy.

This is raised as a grievance in so many of the stories that one becomes surprised that Skyhorse did not catch his own repetitiveness and deal with it. Or was it meant to be disruptive to the reading as an analogy to the disruption of these residents’ lives for what was claimed to be the greater good?

All in all, this is a fine debut for a first-time author. Yet this reviewer believes that Skyhorse has a choice to make when it comes to his next release. He can either use his calming voice to write about life in a style that is a bit more positive and charming, or he can ratchet up the grittiness and become an angry voice. It is hoped that calmness prevails.