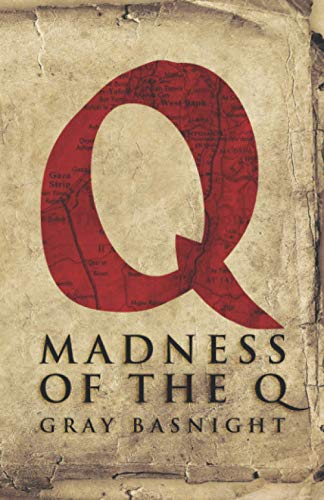 “If you like a book that lands you back in reality feeling relaxed and happy about what could happen to an ordinary guy tossed into deadly events, Madness of the Q is ideal. It might even get you through the holiday season, feeling like you and Sam both have it pretty good after all.”

Breaking out of genre expectations, the new international thriller from Gray Basnight features a second appearance of math professor Sam Teagarden: a happily married American who agrees without argument to step forward when his nation calls him to fly to Europe to examine an epidemic of suicide and the ancient document that may be causing it, and who, when propositioned on a cruise ship by a woman who strips her lovely body in his cabin, prefers to get out on deck and have another imagined conversation with his smart and very supportive wife.

Madness of the Q leaps from one messy political murder to the next, as a killer working for the Vatican chases Sam through Israel and across Europe. Sam’s gentle stumbling pace upgrades to a desperate race, as a second assassination threat, this time from a group called Freedom from God (FFG), targets him as well. Once upon a time a CIA code analyst, and technically called into this case by the FBI, Sam is nonetheless way out of his depth, as even the first threat to his life sets off his posttraumatic stress syndrome (PTSD) at maximum level.

That PTSD is well earned, after what happened to Sam in Basnight’s 2018 thriller, Flight of the Fox. Sam, it turns out, is politically significant to both his nation and his world, because his analytical skills in the preceding adventure impelled him to discover, and then reveal to the world, corruption within the US government. He has become a symbol, a person who can be trusted completely. That’s why the FBI wants him to come reassure the world about the ancient document and its implications.

This newly unearthed document is Q­—that is, part of the source document for the Christian gospels. It includes a fragment that apparently is setting believers to kill themselves, and nonbelievers to try to get Sam to vouch for what’s said there.

Almost accidentally, he’s the sole survivor of a failed US government and Israeli operation that lands him with the car, spy devices, and a huge wad of cash. But Sam’s no trained spy himself, despite his brief work in a CIA code team:

“He certainly had enough cash for bribery, although waving money around was not something he had much experience with. Neither was he experienced in secretly traveling around the Mideast with zealots hunting him like lions on the savanna.”

Although he can kill if forced to, Sam’s basically a nice ordinary professor who’d rather be home with his wife and students. As a result, instead of a Patterson or Le Carré global thriller, Madness of the Q feels like an updated and gender-switched version of the Mrs. Pollifax “spy mysteries” written by Dorothy Gilman in the 1960s and 1970s.

As Sam’s wife, in one of his imagined conversations with her, tells him: “Don’t overthink it. And don’t put so much faith in that silly firearm. You’re Sam Teagarden. You don’t outshoot villains. You outsmart them.”

Here’s the book’s somewhat annoying flaw: Sam doesn’t actually outsmart anyone. Even his math insights are basic to an extreme. But he does outlast the villains, by hiding, jumping, and clinging to those who want to assist him, save his life, and get him to the meeting where he can testify about the fragments of the Q. This turns out to be highly effective as a story device: Sam is such a well-meaning and honest person that the book becomes a page-turner, and while his choices repeatedly flop for lack of spy savvy, his alliances prove well chosen in protecting him and getting him to the unexpected and wryly humorous final twists of the adventure.

If you like a book that lands you back in reality feeling relaxed and happy about what could happen to an ordinary guy tossed into deadly events, Madness of the Q is ideal. It might even get you through the holiday season, feeling like you and Sam both have it pretty good after all.