The Madness of Crowds: A Novel (Chief Inspector Gamache Novel, 17) 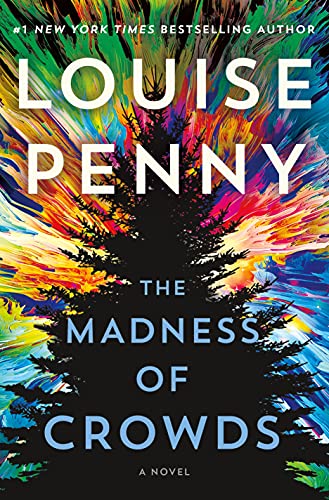 “The Madness of Crowds is a typical Gamache mystery, charming and poetic, thought-provoking and dark, but it could have been much better.”

Chief Inspector Armand Gamache of the Sûreté du Québec is back home in Three Pines, hoping to celebrate the holiday season with his family and friends, when a public event scheduled between Christmas and New Year’s Eve threatens to disrupt their community and cast the shadow of death over them all.

Noted statistician Professor Abigail Robinson’s report for the federal government’s Royal Commission into the social and economic consequences of the recent pandemic is generating a great deal of controversy and unrest. Calling for a program of eugenics that will include the culling and termination of the elderly, the disabled, and others perceived as a drain on the economy in times of crisis, Robinson has embarked on a tour to promote her views.

For some unknown reason, she’s traveled all the way from Nanaimo, British Columbia, to deliver a speech at the tiny Université de l’Estrie, a few kilometers from Three Pines, and Gamache has been assigned to provide security for the event. When an attempt is made on Robinson’s life with Gamache onstage with her, the entire situation quickly spirals into madness.

The Madness of Crowds is Louise Penny’s 17th novel in the Gamache series, following All the Devils are Here (2021), which was set in Paris, France. In the same year she also published State of Terror, a thriller co-written with Hillary Rodham Clinton.

Penny’s Gamache novels are without doubt the flagship series in Canadian crime fiction, earning her seven Agatha Awards, a Crime Writers of America Dagger Award, the Order of Canada, and perennial status on the New York Times bestsellers lists. She has a proven ability to combine police procedural conventions with cozy elements in a way that attracts a large audience from both ends of the spectrum.

Her strengths, above all else, lie in her characters and setting. Gamache, his son-in-law Inspector Jean-Guy Beauvoir, and Inspector Isabelle Lacoste comprise a very good investigative team. Gamache’s neighbors in Three Pines, including artist Clara Morrow, poet and lunatic Ruth Zardo, and bookseller Myrna Landers, continue to charm.

Penny’s treatment of the landscape, further, brings the beauty and attraction of Quebec’s Eastern Townships to readers who might otherwise not be aware of how stunning a place it can be, especially in winter. Some of her best-written passages in the novel come when Gamache takes a moment to look around him at the panoramic splendor of his home.

By way of balance, Penny has chosen to tackle several very weighty themes in this novel. Abigail Robinson’s campaign to “cleanse” our population of the elderly, the ill, and the impaired reminds us that “culling the herd” was in fact a concept that was seriously contemplated by certain political elements during the pandemic.

She also writes extensively about the late Dr. Ewen Cameron, a psychiatrist at McGill University in Montreal whose work for the CIA during the Cold War involved the brainwashing and horrific torture of his patients, most of whom were only consulting him for depression, insomnia, or anxiety. As Gamache laments, “‘The specter of Ewen Cameron hangs over this case . . . as do the ghosts of all his victims.’”

The problems that the author encounters in the novel don’t necessarily arise from the contrast between her dark subject matter and her attempts to charm us with series favorites, but rather from certain flaws in the writing of the novel itself.

For example, she has a tendency to alternate between the given names and surnames of her characters in a way that soon becomes annoying and off-putting. It’s standard practice in popular fiction to stick to one or the other so that the reader stays oriented as the story progresses, but here we oscillate between Jean-Guy and Beauvoir, Isabelle and Lacosse, and Armand and Gamache to the point of distraction.

More seriously, the concluding quarter of the novel circles and stalls just when the author wants to be building toward a spectacular finale. Gamache vacillates endlessly from one theory to the next, taking us nowhere.

Murder victim Debbie Schneider was mistaken for Abigail. No, she was deliberately murdered. No, it was mistaken identity. Abigail’s impaired sister was murdered 40 years ago by her father. No, by Abigail. No, by Debbie. Maybe Abigail after all. No, it had to be Debbie. There’s no connection between these murders. Yes, there is. No, there isn’t.

Around and around we go, right up to the very conclusion of the story, to the point that after you finish the novel and think about it later, you can’t really remember which of the theories proved to be correct, after all.

The Madness of Crowds is a typical Gamache mystery, charming and poetic, thought-provoking and dark, but it could have been much better. We’ll hope that the author’s next offering returns to the high standard to which all her work is held.