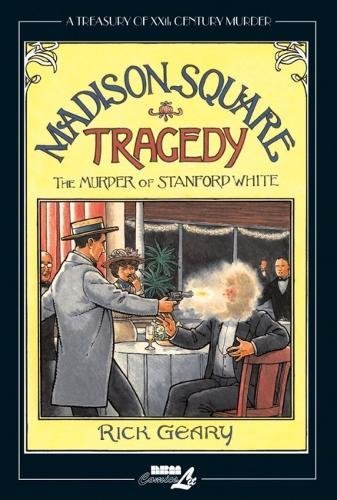 Rick Geary’s latest addition to the Treasury of 20th Century Murder series, Madison Square Tragedy: The Murder of Stanford White, may seem an odd book to suggest as a holiday gift, but considering our collective appetite for criminal procedurals, may prove popular. Madison Square Tragedy has all the luridity of a Law & Order: SVU episode with the style and fashion of Downton Abbey.

Geary has provided a thoroughly researched and utterly captivating telling of the murder of Stanford White by Henry Kendall Thaw over Evelyn Nesbit. If their names aren’t familiar, you may be familiar with some of their work.

Stanford White was one of the most prominent architects at the turn of the 20th Century whose crowning glory was Madison Square Garden. You may know Evelyn Nesbit as the “Gibson Girl” or “The Girl on the Red Velvet Swing.” Henry Thaw you’d be forgiven for not knowing. A man described as having “crazy eyes,” Thaw lived in New York City on an $8,000 a month allowance (when the average annual wage was a mere $500) courtesy of his mother, the widow of Pittsburgh steel tycoon, William K. Thaw. His time was primarily spent attending the theater looking for girls to rescue from the wicked city, a dispensation nurtured under the mentorship of Thomas Comstock.

Rick Geary gives a revealing early biography of each player in this danse macabre, peeling back the curtains so that we are better equipped to understand the motivations behind the actions.

We are shown in Geary’s clear period illustrations the rise of Evelyn Nesbit. From working as a shop girl in Wannamaker’s, to becoming the muse of the Philadelphia art scene, Evelyn was on a trajectory to fame that mirrors the rise of the modern celebrity. Once established in New York City, 16-year-old Evelyn came under the lecherous eye of Stanford White.

Though renowned in New York Society, married and in his 60s, Stanford White charmed and entertained both Evelyn and her mother with weekend excursions and exotic dinners. From a hand to mouth existence to being courted by millionaires, Evelyn and her mother seemed to grow too accustomed to the lap of luxury—so accustomed that they were willing to pay an incredible price to stay there.

According to Evelyn, she was drugged to a state of unconsciousness and raped by Stanford White. Evelyn continued to associate with White afterward, though increasingly infrequently, and at Thaw’s subsequent trial testified that she had relations with White after the rape, but always against her will.

Henry Thaw began courting Evelyn very fervently, having become enamored of her from attending many of the same shows as White had. After rejecting his proposals for many months, Evelyn finally revealed the reason for her many “No”s. Upon hearing of his fiancée’s violation, Thaw flew into a rage and attacked Evelyn himself. Oddly again, Evelyn married him not long afterward.

His wife’s violation led to Thaw’s murder of White, which led to three subsequent trials over the case.

We are presented a brilliant visual representation of America at the turn of the century with Geary’s trademark stark linework. We are given an entirely objective presentation of the case and left to make our own conclusions about motive on the parts of all the main characters.

One can definitely understand why the author decided to leave out a number of the more disturbing details surrounding accusations of pedophilia and torture on the parts of White and Thaw, respectively. But a little additional outside reading into the case will take a reader down a rabbit hole of corruption, bribery, yellow journalism, and base perversion that one can barely believe that these events took place more than 100 years ago.

To be able to share Madison Square Tragedy, a shining example of the possibilities of the comic medium—with those who would not necessarily approach a comic book—is a triumph.