Made to Kill (L.A. Trilogy) 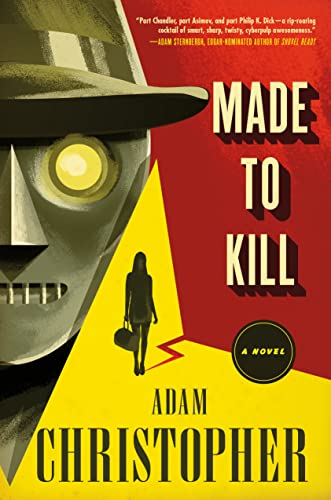 Science fiction. Noir. Gritty detective novel. 1960s alt history. Made to Kill runs the gamete of genres yet seems to combine them perfectly into a highly entertaining and original take on the Los Angles private detective novel.

The year is 1965, August 10th to be precise, and President John F. Kennedy is busy with a visit to Cuba while some of the largest stars in Hollywood prepare for the premiere of the new blockbuster film Red Lucky. This is what Raymond Electromatic, the last robot in the world and consequently the world’s only robot private investigator, discovers as he reads through the Daily News.

For Raymond, every day is a new discovery since his memory tapes only last 24 hours and he has to relearn most of what’s going on either from the news or from his friend/handler/secretary/super computer Ada. The lack of long-term memory might be one reason Ray has switched from private dick to the best hit man money can buy.

It’s the latter profession that brings a young woman into his office with a satchel full of gold and an order to kill one of the biggest movie stars in the world. Unfortunately for Raymond, he has no idea who the movie star is and is left with only one clue: an address—an address that leads him into the Hollywood hills and directly to the iconic Hollywood sign.

From there the story rockets into a tale of Russians spies, high-tech/low-tech espionage, double crosses, glamorous stars, desperate lovers, and Raymond’s struggle with his memory limitations and the fact that he’s the last of his kind on Earth. It doesn’t help that he has “ghost” memories possibly from his creator or that Ada seems to be keeping something from him.

A true to form noir novel that gives homage to the greats like Chandler and Hammet, Made to Kill is sure to entertain those readers that love old school crime fiction as well as those readers that love a good, classic scifi tale. Plenty of action, intrigue, twists and turns, not to mention scifi nostalgia and an original take on history, Made to Kill is an excellent first novel on Christopher’s LA Trilogy. Readers will certainly be looking forward to the next installment in Raymond Electromatic’s adventures as the world’s last robot and only robot detective/hit man.