Made in China: A Prisoner, an SOS Letter, and the Hidden Cost of America’s Cheap Goods 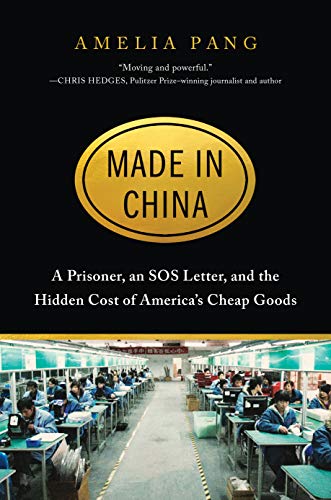 In 2012, a Damascus, Oregon woman named Julie Keith tore open a package of inexpensive Halloween decorations—fake tombstones—and out fell a piece of paper. It said in part, “This product produced by Unit 8, Department 2, Mashanjia Labour Camp, Shenyang, Liaoning, China. People who work here, have to work 15 hours a day without Saturday Sunday break and any holidays, otherwise they will suffer torturement, beat and rude remarks. . . . Many of them are Falun gong practitioner, who are totally innocent people.”

The existence of labor camps in China that assemble products for western companies is not itself a revelation, but Pang has produced a very well-written and researched account of how they operate, and doesn’t ignore the human dimension. Her main subject is the man who wrote that note, Sun Yi, once a promising and favored university graduate, but brought down by his adherence to the seemingly innocuous Falun Gong organization.

Pang takes us inside Masanjia RTL Camp, which was opened in the late 1950s, then “expanded in 1999 to make room for the sudden influx of Falun Gong captives when the government began cracking down on the group.” The horrific conditions there are vividly displayed in Made in China, because Pang gives them to us through Sun Yi’s eyes. He describes (in vividly dramatic third-person scenes) being force-fed, tortured, made to work with only four hours of sleep per night, and restricted in bathroom visits.

Sun Yi is also subject to “re-education,” with the aim of getting him to give up his devotion to Falun Gong. This he refuses to do, even as many prisoners around him pledge allegiance to the state and get released.

Falun Gong is a curious entity. Founded only in 1992, it promotes a series of exercises, a form of qigong, a slow healing art with a 4,000-year history. As Pang tells it, the Chinese government initially supported Falun Gong—until the group distanced itself from the government-based qigong organization. “A group with 70 million followers was now outside [the government’s] control,” Pang wrote. A rigorous campaign against Falun Gong reportedly followed. The persecution has included the harvesting of organs from imprisoned group members, Pang reports.

Amnesty International has taken testimony from Falun Gong members, one of whom describes “torture, forced labor work, deprivation of basic needs, brainwashing, no freedom to go to the restroom, no freedom to wash clothes, bad food and bad living conditions.”

There’s more to Falun Gong than just healthful exercise, though. While not a religion per se, it has some core beliefs, including—as Pang notes—opposition to abortion, LGBT rights and, in some cases modern medical care. Members are encouraged not to drink, use drugs, or engage in premarital sex.

And this is where Pang’s book gets a little problematic. She is an excellent journalist, with an impressive track record, and not a member of the group herself. But her Chinese mother is a Falun Gong practitioner, and Pang has written for Epoch Times, which she describes as “a U.S.-based Chinese dissident news organization that was staffed mostly by Falun Gong followers.” She no longer writes for Epoch Times.

ANd it’s a bit more than that. The New York Times said last fall that “the Epoch Times and its affiliates are a force in right-wing media, with tens of millions of social media followers spread across dozens of pages and an online audience that rivals The Daily Caller and Breitbart News, and with a similar willingness to feed the online fever swamps of the far right.” It also publishes a lot of negative information on the Chinese regime, and describes itself as having been founded “in response to communist repression and censorship in China.” Falun Gong isn’t mentioned in the “About Us.”

The Epoch Times is a leading proponent of the “stolen Presidential election” claim, and considered the contest undecided for many weeks after the vote. That fact earned it many defectors from Fox News. There are, perhaps, parallels to Reverend Moon’s conservative Unification Church operating the Washington Times, another ultra-conservative paper. But the church has been upfront about its ownership, and Falun Gong is much cagier.

It is sure that Pang knows all this, but it should be within the pages of her book. The reporter had the initiative to explore, which includes following supply trucks from labor camps near Shanghai to prove they supply companies that produce goods for western export. She documents how the camps have evolved—some of them now are ostensibly drug rehab facilities—without changing fundamentally. Ultimately, one wants to know more about the secretive Falun Gong, but the book is hard to shake.