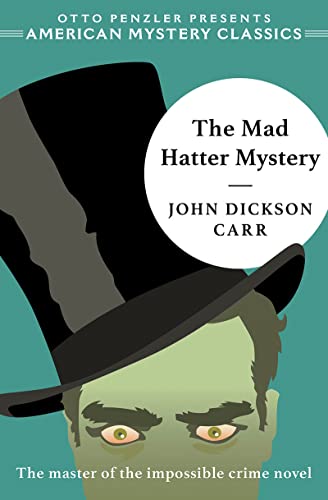 “The Mad Hatter Mystery is credible and enjoyable, and makes readers hungry for the next opportunity to match wits with Dr. Gideon Fell.”

If you like locked-room mysteries, this one is a zinger. John Dickson Carr is considered “the master of the impossible crime novel,” and wrote his mind-bending brain-teasers back in the Golden Age of detective stories.

Now, thanks to a new publisher dedicated to bringing such classics back into print, a new generation of readers can enjoy pitting their own cleverness against the best of the best.

This particular volume from 1933 happens to be the second of two dozen Dr. Gideon Fell novels. Dr. Fell is like a walrus version of Hercule Poirot, Agatha Christie’s famous sleuth, in that he’s a brilliant civilian who solves crimes that elude the police.

Both series characters share a supercilious arrogance, quirky looks and mannerisms, and a tendency to withhold their deductions until all the pieces of a puzzle are in place—at which point they present them with a flourish and show everybody up. But they also bring the killers to justice.

Dr. Fell succeeds again in The Mad Hatter Mystery. This puzzle is centered around the Tower of London; a misleading name, as the “tower” is in fact a castle that has served as fortress, palace, armory and prison over centuries. These days it’s a historic monument open to tourists, and it’s always been a nice place to commit murder on a foggy night.

The book’s victim is a reporter covering the mysterious theft of important people’s hats. The thief is a prankster who places the stolen hats in public spots where they show the most ironic humor. It’s funny until one of those hats shows up on a dead man, who is found on the Tower grounds on a dark and foggy night.

The window of opportunity in which to kill him is extremely narrow—the equivalent of the “locked room”—and everyone who had any reason to murder the man had a perfect opportunity to do so. Yet in each case there’s a small detail that makes it impossible for the person to have done the dastardly deed.

Dr. Fell, working with Superintendent Hadley of Scotland Yard and his minions, sees past the obvious, and at each stage of the investigation throws in an observation that gives the evidence a new twist.

This is the quality that makes the story a brain-teaser. The reader is presented with all necessary information, yet it’s done with such adroit sleight-of-hand that one is looking thisaway while they should be looking thataway. The same set of ingredients can be mixed into different combinations that all make sense. One has to be very sharp to spot the anomalies leading to the correct deduction.

Although such puzzle mysteries focus on plot, Carr is adept at inserting dashes of characterization that make his stories satisfactorily human. He falls just short of using stereotypes by injecting one-liners or short paragraphs that capture somebody’s mood, personality, or appearance in a refreshing way.

In the whodunit equation of means, motive, and opportunity, the mechanical parts are emphasized in this book while the personal parts aren’t forgotten. Thus even though the story and its companions might feel a little farcical at times, The Mad Hatter Mystery is credible and enjoyable, and makes readers hungry for the next opportunity to match wits with Dr. Gideon Fell.