The Machine Has a Soul: American Sympathy with Italian Fascism (America in the World, 39) 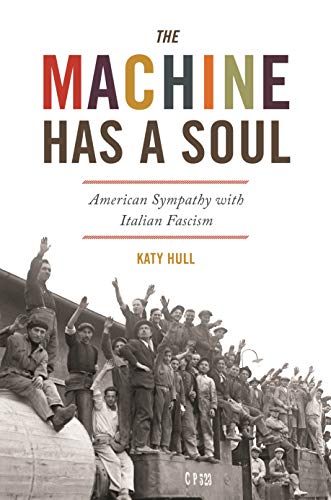 “illuminating, well-written, and offers sharp insights into fascism’s strong appeal, for some, in times of turbulent change.”

How to explain some Americans’ flirtation with Italian fascism during the years between the world wars? In The Machine Has a Soul, Katy Hull, a lecturer in American studies at the University of Amsterdam, examines the lives and activities of four prominent American fascist sympathizers of the 1920s and ’30s to reveal the roots of their attraction to the anti-democratic excesses of Benito Mussolini.

In that time of disillusionment after World War I (the “war to end all wars”) and ambivalence about the trappings of modernity (the anonymity of cities, pointlessness of consumption, and dulling effects of standardization), machines became metaphors for the modern condition, writes Hull. Mechanical production was seen as stunting the souls of assembly line workers.

For some, “fascism was an effective system for managing contemporary challenges because it delivered the material benefits of the machine age while protecting Italians from its emotionally draining effects.” Indeed, sympathizers believed Mussolini’s seemingly efficient and technologically advanced form of modernity upheld timeless values: tradition, religion, and family.

This was in contrast to the licentious and materialistic behavior that held sway in much of urbanizing America.

The four pro-fascist individuals studied by Hull are a mixed and fascinating lot. All eventually abandoned fascism in the late 1930s when Mussolini’s anti-Semitism and close ties with Nazi Germany became apparent.

Richard Child, a conservative writer, magazine editor, and ambassador to Italy in the early 1920s, hailed Mussolini as an efficient administrator, who was turning his country into “the machine which will run and has a soul.” He found fascism “invigorating.”

Anne O’Hare McCormick, a progressive Catholic journalist, covered the rise of the fascists in Italy as a Pulitzer Prize-winning correspondent for The New York Times. She declared the “pointlessness” of Americans defining themselves through their possessions.

Herbert Schneider, a scholar and political philosopher at Columbia University, argued that the fascist Italian government worked. A pragmatist and student of John Dewey, he said any thought that “gets you somewhere (intellectually speaking)” was a good one.

Hull’s book, based on her dissertation at Georgetown University under historian Michael Kazin, draws on prodigious research into these diverse individuals and the period. She provides vivid portraits of her American sympathizers, exploring their writings and impact.

For all their differences, the foursome shared an admiration for the way Italy was coping with the challenges of economic, social, and cultural changes. As shapers of American public opinion, they touted the fascist corporate state’s apparent successes and urged reforms to strengthen the U.S. system.

All of this occurred amid America’s post-World War I disillusionment, the cynicism of the 1920s, and what Anne McCormick deemed the “world-weariness” imposed by mass-production and mass-culture. In the ’30s; moreover, the Depression was widely seen as a product of “machine-made capitalism,” Hull writes.

And there was Italy, where young fascist squads had swept the country, expressing “righteous anger” against the nation’s moral decay, demonstrating
a Spartan morality opposed to “bacchanalia, the exploration of sexual identity, the pursuit of self.” They found their leader in a vigorous prime minister who resembled a modern business executive and exuded “calm and clarity.”

Offering hope that humans “could still be in control,” Mussolini appealed to a cross section of Americans as an antidote to the ills of modernity, says Hull. Until the coming of the New Deal in 1933, American political leaders “had failed to make democracy relevant, to manage the pace of industrialization, and to support those who felt left behind in the modern world.”

The author says her study suggests a lesson for the American present: “When a system of government fails to protect those damaged by transitions, it will provoke feelings of disenchantment.” The disenchanted may seethe quietly—or may look for alternative forms of government.

Her book is illuminating, well-written, and offers sharp insights into fascism’s strong appeal, for some, in times of turbulent change.