MacArthur’s Air Force: American Airpower over the Pacific and the Far East, 1941–51 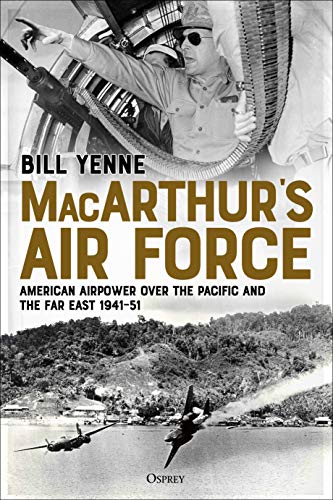 “Bill Yenne’s new book MacArthur’s Air Force is the story of the remarkable achievements of the American air forces—the planes, the key officers, and most of all the courageous pilots—under MacArthur’s command in World War II and Korea.”

In 1925, General Douglas MacArthur envisioned the future of warfare by stating: “Neither ground nor sea forces can operate safely unless the air over them is controlled by our own air power.” Twenty-five years and two wars later, MacArthur noted: “In modern warfare, air supremacy is the first absolute essential.”

Bill Yenne’s new book MacArthur’s Air Force is the story of the remarkable achievements of the American air forces—the planes, the key officers, and most of all the courageous pilots—under MacArthur’s command in World War II and Korea.

MacArthur was one of the first U.S. military leaders to appreciate the need to integrate air power into combined arms operations. As Army Chief of Staff in the early 1930s, he urged Congress to support increased funding for air forces, explaining that air power was needed to “defend our coastlines, for attack against hostile ground forces, for bombardment of sensitive points in the enemy’s supply organization.”

World War II and all modern wars since then confirmed the wisdom of MacArthur’s outlook. As commander of U.S. forces in the Southwest Pacific in World War II, MacArthur, working in tandem with Admiral William “Bull” Halsey, used air, sea and land forces to achieve victory over Japanese forces in New Guinea and the Solomon Islands, and the Philippines.

In Korea in September 1950, MacArthur brilliantly combined land, sea, and air forces to seize the port of Inchon and turn the tide of the war in America’s favor, dramatically reversing a string of North Korean victories that had nearly pushed American and South Korean forces off the peninsula.

Yenne devotes most of the book to the Southwest Pacific campaign of World War II. U.S. and Philippine forces initially suffered a devastating defeat at the hands of Japanese forces, in part because U.S. air assets in the Philippines were limited and were largely destroyed on the ground in the early stages of Japan’s air attacks. Yenne notes that while MacArthur has been roundly criticized for this loss, the truth is more complicated.

MacArthur’s air commander Major General Lewis Brereton had been ordered to get U.S. planes aloft after news of Pearl Harbor reached Philippine headquarters, and he did so. Brereton also had orders to attack Japanese forces on Formosa (Taiwan).

According to Yenne, Brereton recalled the planes to Clark Air Field to load bombs and refuel for the Formosa Mission. It was, Yenne writes, a “fluke of circumstance” that U.S. planes were mostly on the ground when Japan attacked. “An hour earlier or later,” he writes, “would have made all the difference.” To this day, however, MacArthur’s detractors hold him solely responsible for this disaster.

Japan seized control of the Philippines, and MacArthur’s troops retreated to the Bataan Peninsula and the island of Corregidor. President Roosevelt ordered MacArthur to evacuate to Australia. The remaining U.S. and Filipino forces eventually surrendered under extreme circumstances, then suffered through the Bataan Death March and brutal imprisonment. MacArthur publicly pledged to return to the Philippines.

Yenne notes that MacArthur believed that the best strategy for defending Australia was to fight “beyond its own borders . . . and . . . to seize the initiative, move forward and attack.”

Kenney is one of the lesser-known heroes of the war against Japan. He reorganized MacArthur’s air forces, selected skilled subordinates, and immediately sought ways to take the offensive by attacking Japanese shipping, airfields, and troops. He also became, in Yenne’s words, “a pioneer in the use of tactical airlift.”

The MacArthur-Kenney strategy led to victory in New Guinea and set the stage for MacArthur’s return to the Philippines, but it was the individual pilots of MacArthur’s air force that Yenne rightly lauds as the real unsung heroes of the air war in the southwest Pacific.

Yenne highlights the heroism of those pilots: Ed Larner, who earned a Silver Star for his low-altitude attacks against Japanese forces in Buna; Richard Bong, a fighter pilot who became “the highest scoring American ace of World War II and of all time,” eventually downing 40 Japanese planes in air combat and earning the Congressional Medal of Honor; Tommy McGuire, whose daring exploits in the air war earned him second place in what Yenne calls “the hierarchy of aces” by scoring 38 kills and a posthumous Medal of Honor; Jerry Johnson, Neel Kearby, Jay Robbins, Robert Westbrook, Tommy Lynch, and a host of others, some of whom died in combat. As a character in The Bridges at Toko-Ri wondered: “Where do we get such men?”

The strategic highlights of the New Guinea campaign included the capture of Rabaul as part of Operation Cartwheel and the assault on Hollandia. Yenne notes that MacArthur embraced the approach “to avoid the frontal attack with its terrible loss of life; to bypass Japanese strongpoints and neutralize them by cutting their lines of supply; to thus isolate their armies and starve them on the battlefield.”

The capture of Hollandia inspired retired General John J. Pershing to write to MacArthur: “When history looks back to master strokes, your capture of Hollandia will undoubtedly stand out as one of the most masterly. Seldom if ever, in history have such important military results been obtained at such small cost to the attacker and with such surprise and disaster to the defender.”

Retaking the Philippines was much bloodier and involved air raids on Japanese targets, an air war over Leyte Gulf, including combatting kamikaze attacks, and massive bombing of Corregidor Island. MacArthur’s air forces also bombed Japan’s important oil fields and refinery complexes in the Dutch East Indies, what Yenne calls “the single most economically significant strategic target outside mainland Asia or Japan itself.”

While General Curtis LeMay’s Eighth Air Force destroyed Japanese cities in the spring and summer of 1945, MacArthur’s air forces, including B-24 bombers and P-38 fighter escorts—attacked targets on Formosa which hosted bases from which Japan launched kamikaze attacks on U.S. warships. That was followed by air assaults on Hong Kong and Indochina.

By the summer of 1945, Yenne writes, “the ocean across the vastness of the [Southwest Pacific Area] was an American lake beneath an American sky. It was punctuated by island after island with Japanese garrisons . . . but these troops could do little other than stare at empty horizons and dwindling supplies.” MacArthur’s air forces had contributed greatly to this outcome.

MacArthur was given overall command of the anticipated invasion of the Japanese home islands, code named Operation Downfall. It would have been the greatest, and most likely the bloodiest, military invasion in history, but proved unnecessary when Japan surrendered after the atomic bombings of Hiroshima and Nagasaki, and the Soviet invasion of Manchuria. Yenne notes that the War Department ordered a half million Purple Heart medals in anticipation of the invasion of Japan.

With Japan’s surrender, MacArthur oversaw the occupation of the country and its transition into a peaceful constitutional democracy. In June 1950, however, the Cold War turned hot as North Korea, supported by Communist China and the Soviet Union, invaded South Korea, and swiftly overran outnumbered and outgunned South Korean forces.

President Truman ordered American forces to South Korea and placed MacArthur in command of those forces. The United Nations, absent the Soviet Union, voted to forcibly resist North Korean forces, and MacArthur was named commander of UN forces, as well.

In the air war over Korea, American pilots flew B-29 bombers and F-86 Sabre fighters against MiG-15s (often operated by Soviet pilots). The jet age had arrived near the end of World War II. Yenne notes that the skies south of the Yalu River were known as “MiG Alley,” which was “the scene of intense aerial combat between MiGs and Sabres” throughout the war. U.S. Sabre pilots achieved a 10-1 kill ratio over the MiGs, with American aces Joe McConnell and James Jabara leading the way with 16 and 15 victories, respectively.

MacArthur the strategist had one more masterpiece in him: Inchon, the daring seaborne landing behind enemy lines that led to the rout of North Korean forces and their rapid retreat across the 38th Parallel. Washington authorized MacArthur to cross into North Korea to destroy North Korea’s armed forces. When the Chinese Red Army massively intervened in November 1950, Washington, against MacArthur’s wishes, changed the political goal of the war from victory to stalemate.

MacArthur’s public disagreements with the new policy (“In war there is no substitute for victory”) led to his dismissal. The inconclusive war led to President Harry Truman’s political demise and the election of retired General Dwight D. Eisenhower (who once worked for MacArthur in the Philippines prior to World War II) as president.

In his 1962 farewell speech to the cadets at West Point, MacArthur called the American man-at-arms “one of the world’s noblest figures,” and lauded that “enduring fortitude, that patriotic self-abnegation, and that invincible determination which have carved his statue in the hearts of his people.” Bill Yenne’s story of the airmen who exhibited those traits in the skies over the southwest Pacific and Korea is a welcome reminder of the debt all Americans owe to those (now men and women) who fight for us.