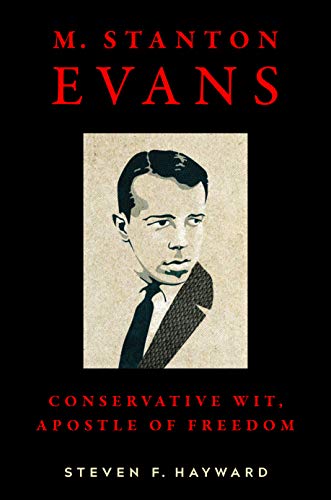 “M. Stanton Evans was one of the most influential thinkers and writers who shaped the modern conservative movement in the United States . . .”

M. Stanton Evans was one of the most influential thinkers and writers who shaped the modern conservative movement in the United States, yet, as Steven Hayward points out in his admiring biography, Evans is not well-known among today’s rising generation of conservatives. Hayward believes there are two main reasons for this relative neglect: first, because Evans was genuinely modest; and second, because he courageously confronted conventional shibboleths that more “refined” conservatives avoided.

Hayward, the author of two acclaimed volumes on The Age of Reagan, knows his subject well. He worked as an intern at Evans’ National Journalism Center (NJC) in 1981, just as Ronald Reagan was entering office as President to begin “the Reagan Revolution.” These were heady times for young conservatives—one of their political and ideological champions had won the White House in a landslide victory. And M. Stanton Evans was one of the intellectual giants who helped pave the road to victory.

Evans was both a journalist and a political activist for conservative causes. And he was what Hayward calls a “contrarian,” whose distinctive journalism led him “to probe for inconsistencies and telling hypocrisies, and above all not to accept liberal orthodoxy no matter how unanimously propounded by the high and mighty.”

Evan’s father Medford Evans was also a contrarian, who had been a member of the Atomic Energy Commission and worked on the Manhattan Project, wrote for The Freeman, National Review, and Human Events, flirted with the John Birch Society, and supported Senator Joseph McCarthy. In 1953, Medford Evans wrote The Secret War for the A-Bomb (with an introduction by James Burnham), which explored Soviet infiltration of the Manhattan Project and decried the sorry state of US internal security.

M. Stanton Evans followed in his father’s footsteps. After graduating from Yale, Evans joined The Freeman as an assistant editor. He then moved on to National Review, where he served as the journal’s Midwestern correspondent. In the late 1950s, he joined the staff of Human Events as a contributing editor. These journals were the intellectual arsenal of the modern conservative movement.

At Human Events and later at the NJC, Evans mentored young conservative writers, which he continued to do throughout his career. But he also worked for 15 years as a reporter and editor at the Indianapolis News. Hayward notes that as a reporter Evans focused on facts, but that even his editorials and opinion columns were filled with facts. And he passed on that approach to young aspiring journalists.

Hayward notes that Evans became a political activist in the early 1960s when he authored the “Sharon Statement” at William F. Buckley’s home at Great Elm in Sharon, Connecticut, that resulted in the formation of Young Americans for Freedom, and later in the Goldwater presidential campaign in 1964. He sensed that Goldwater was leading a movement that would someday take over the Republican Party. And it was during that campaign that Evans (and others) foresaw the rise of Ronald Reagan in national politics.

Hayward compares the Goldwater movement to the populist movement that gathered around Donald Trump in 2016. Both movements were a reaction against the centralization of power among elites of both parties in Washington, DC. Both movements were designed to, in Trump’s words, clean-out the “swamp” that had accumulated more and more power and led to the enormous growth of federal power at the expense of the states and the people.

After Goldwater was defeated in a popular vote and electoral college landslide, Evans attacked Lyndon Johnson’s Great Society programs and his mishandling of the Vietnam War and the nuclear arms race with the Soviet Union. He also sensed that despite Goldwater’s defeat, the conservative movement behind his candidacy was gaining ground, especially in the South and West. The 1968 election confirmed the conservative ascendancy as Nixon (who Evans distrusted) and George Wallace combined for 57 percent of the national vote.

Evans hoped that Reagan would get the GOP nomination in 1968, because he saw Nixon as a domestic liberal and a member of the foreign policy establishment that he distrusted. Evans criticized detente, arms control, and the opening to China, failing to appreciate the domestic political constraints that Nixon was operating under.

Watergate was no big deal, Evans thought, but was used by the Democrats and the Nixon-hating media to drive Nixon from office. Hayward sees parallels here, too, between Watergate and the Democratic/media Russia collusion narrative that sought to drive Trump from office. And Evans accused the media and liberals of hypocrisy for ignoring Kennedy-Johnson abuses of power that were equal to or worse than anything Nixon was accused of doing.

Hayward details Evans’ involvement in founding the American Conservative Union, the Intercollegiate Studies Institute, and the Conservative Political Action Committee (CPAC), among other important conservative organizations. And he kept training young conservative writers and journalists at the NJC.

Evans’ greatest literary legacy, Hayward believes, are three of his books: The Theme Is Freedom, Blacklisted by History, and Stalin’s Secret Agents. The first book Hayward describes as a “theoretical account of conservatism and human freedom.” The other two books are a courageous and well-documented defense of Senator Joe McCarthy and a meticulous account of communist subversion and infiltration of the Roosevelt-Truman administrations. And Hayward himself deserves credit for praising these books, which most liberals scorned and most conservatives ignored or lamented.

Hayward calls this book a “tribute” to his mentor, and he makes few critical judgments about Evans. He also describes Evans throughout as a man of “genuine warmth and casual friendliness,” unaffected by fame, with humble tastes and a quick wit. And he notes that while Evans was not a pious man, he was a believing Christian who thought that religion was important to man’s virtue.

Evans died in 2015 at the age of 80. His greatest overall legacy, Hayward believes, “is an army of disciples inspired by his intellectual, professional, and personal example . . .” Hayward concludes by quoting one of Evans’ long-time friends who worked in the Reagan White House: “Thousands of conservative activists owe their lives and livelihoods to Stan Evans. . . . His door was always open . . . He always answered his phone. He always had time to listen and reflect, provide advice and support, and take action to help. He was a mentor to us all.”