The Lying Game: A Novel 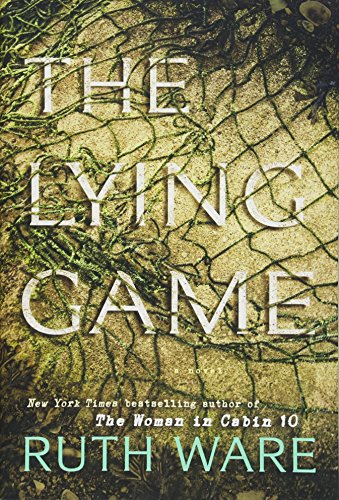 Well known for suspenseful novels with clever plot twists, British author Ruth Ware is the New York Times bestselling author of In a Dark, Dark Wood and The Woman in Cabin 10. The Lying Game, her third novel, begins with the unearthing of a human bone on the English coastline in an area known as The Reach. The result of this discovery is a frantic text from a woman who once attended a private boarding school with three other girls, none of whom have seen each other in years. A simple message, “I need you,” is enough to summon the other three.

As young girls, Isa, Fatima, Thea, and Kate engaged in what was known as the lying game. It has five rules on which the novel is structured: Rule One, Tell a Lie; Rule Two: Stick to Your Story; Rule Three, Don't Get Caught; Rule Four, Never Lie to Each Other; and Rule Five, Know When to Stop Lying.

The problem with rules, of course, is that they’re made to be broken. Unsurprisingly, the young girls branch out from their intended victims, primarily teachers and older students who think too highly of themselves, to other innocent victims who get caught up and hurt by the game.

Ware does two things very well in the novel. The first is to create an atmosphere that’s threatening and claustrophobic. In fact, “The Tide Mill,” battered and blackened by the elements, almost serves as a character in its own right. The second thing she does well is to build up suspense, at least in the first part of the novel.

Where she struggles, however, is in the development of full-bodied characters and in maintaining the momentum of the story as she shifts between past and present to reveal the ultimate lie that has impacted the lives of the four women. Although the final section of the novel picks up the pace and leads us through two final twist plots to the climax, many readers by this point may have lost interest in the story.

Ware is at her best when she uses short bursts of dialogue. Otherwise, her prose is overwritten and overly descriptive, often repetitive, and punctuated by the constant use of commas that interrupt its natural flow. An example of this problem is the scene in which the narrator Isa travels with her six-month-old daughter Freya to meet her friends. Ware subjects the reader to several long descriptive paragraphs covering her difficulties in getting the baby carriage on the train and balancing a coffee, which she fears she might accidentally spill on Freya. Eventually:

“. . . we're both comfortable, me with my book and my coffee, Freya asleep, with her blankie clutched to her cheek. Her face, in the bright June sunshine, is cherubic—her skin impossibly fine and clear—and I am flooded with a scalding drench of love for her, as painful and shocking as if that coffee had spilled across my heart. I sit, and for a moment I am nothing but her mother, and there is no one in the world except the two of us in this pool of sunshine and love.”

Beyond the awkwardness of the spilling coffee metaphor, it must be said that this heavy, self-conscious prose style slows down the reader’s eye after a while and is not particularly effective in generating suspense.

Ware’s other main problem is that the characters are flat to the point of being stereotypes, and the narrator Isa isn’t particularly effective in drawing our interest or support. In a suspense novel, it's vital that the reader's emotions become invested in the main protagonist in order to feel their suffering and vicariously join in as they uncover threats and react to danger.

However, Isa's character is largely off-putting, obsessed as she is with her child and distrustful and disapproving of her husband. There’s little to no character development in the novel, and in fact the final section entitled “Know When to Stop Lying” is ironic because the narrator is still openly lying at the end of the novel.

In sum, The Lying Game is probably best recommended for Ruth Ware fans who have enjoyed her previous novels, readers who might be a little more forgiving of its flaws than those who are newcomers to her storytelling games.