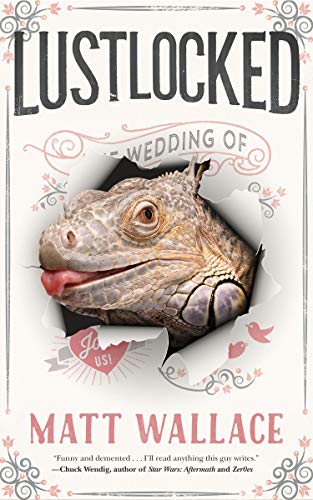 “For fans and readers of magical urban fantasy, this novella is perfect.”

The crazy world of Sin Du Jour began in Wallace’s first novella, Envy of Angels, and Lustlocked continues right where the first one left off, literally the very next day. This is good since the only true criticism that can be said for the Sin Du Jour series is they are novellas and just too damn short. That’s a good thing since it means they are entertaining enough to leave the reader wanting more and more.

In Lustlocked, Wallace introduces readers to the world of goblins. Not the ugly, warted, stunted things of fairy tales, but of the David Bowie in Labyrinth kind: suave, gorgeous, the highest bred of the fae folk. Sin Du Jour, the catering company that specializes in events for the supernatural and their like, is tasked to handle the goblin prince and princess’s wedding.

This is not an event that can be scrimped on, not a celebration where corners can be cut. Goblins in Wallace’s world eat jewels and savor only the rarest of gold when it comes to celebrating the nuptials of the future leaders of the goblin race. But, as with all weddings, there are hiccups. Mainly that the bride is not goblin at all, but human. She feels underappreciated by her soon to be in-laws and says as much to SDJ’s resident pastry chef.

Unfortunately for all, SDJ’s resident sorceress/witch/magic woman overhears this and decides to take things into her own hands to make the princess feel like she is truly part of the goblin family. Nothing goes as planned and the wedding reception turns into something akin to Jurassic Park on late night Cinemax.

Using all of their skills in the magical arts, SDJ’s crew has to find a way to fight off the creatures that have been spawned by magic gone wrong while also trying not to kill them. Not an easy task at all.

With his trademark humor and wit, Wallace comes close to exceeding his first novella outing in this series. The story is fast, funny, and sets the stage for more wild tales that are sure to come. For fans and readers of magical urban fantasy, this novella is perfect. For those that enjoy a healthy dose of humor in the vein of Christopher Moore then Wallace’s writing is not going to disappoint. Well worth the (brief) time it takes to read.

Plus, a bonus story at the end that gives some insight into SDJ’s stocking and receiving department!