Lugosi: The Rise and Fall of Hollywood's Dracula 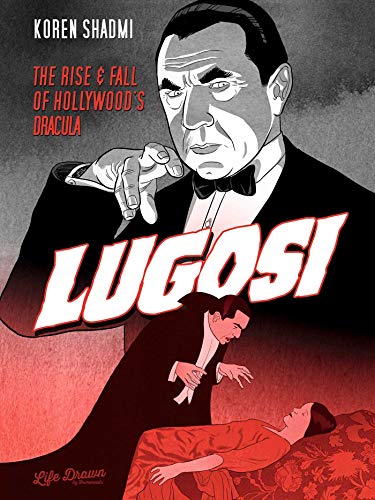 “Shadmi’s deeply absorbing and moving biography will appeal to Dracula afficionados of all ages.”

A haunting graphic biography of the Hungarian actor Bela Lugosi (1882–1956) whose 1931 film Dracula has scared most American youths to death. He remains exceedingly creepy in these pages.

An award-winning illustrator and cartoonist, Shadmi describes a deeply troubled Lugosi, neglected in his Transylvania childhood by indifferent parents, and discouraged by his strict banker father from pursuing an acting career. He became an overnight (and forever typecast) sensation as the immortal, blood-sucking Count Dracula, and lived a dark off-screen life of excess, failed marriages, and drug addiction.

The book opens in Los Angeles in 1955, where Lugosi (“used up, strung out, and forgotten”) has just been admitted to a state hospital. “I must be helped!” he tells terrified nurses, who recognize him. Their patient lacks a cape but could be the very vampire who intoned: “Listen to them. Children of the night. Vhat music they make.” In his films, the actor wore little makeup and used his natural Hungarian-accented voice.

A long-time junkie after serious sciatica, Lugosi remained in the rehab facility for three months, visited in dreams by Dracula. Both had “insatiable needs,” writes Shadmi.

The author artfully juxtaposes late-in-life hospital scenes with Lugosi’s earlier career, first as a minor struggling actor in Budapest with delusions of greatness (he claimed to have been “the leading actor of Hungary’s Royal National Theatre”), and then as a performer in immigrant Hungarian theater as a newcomer to New York City in the early 1920s. He recounts Lugosi’s long string of bad marriages.

Shadmi’s artwork and narrative capture the roller coaster of Lugosi’s episodic career. Rave reviews for his eerie performance in the 1927 Broadway play Dracula trigger instant stardom and a series of love affairs. Carl Laemmle Jr. hires him at a paltry $500 a week for the Universal Pictures production of Dracula. That movie seals his fame and his penchant for ostentatious living.

Unfortunately, Lugosi never learned to speak English clearly (he exceled at heavily accented lines like “A lady in distress?”), which precluded him from consideration for most acting roles. He would soon begin appearing as another creature—the Frankenstein monster—a role he had once rejected.

His horror movies included Murders in the Rue Morgue (1932), White Zombie (1932), The Raven (1935), and Son of Frankenstein (1939). Then there was a lull in interest in horror films; Britain had banned them. When a California theater owner staged a Dracula revival featuring a personal appearance by the actor, Lugosi enjoyed a new spurt of Hollywood interest. But it was short-lived.

Before long he would begin accepting any work offered—mainly cheap productions made by exploitive independent Hollywood studios. His career ended with “bizarre” appearances in Plan 9 from Outer Space and other movies by the low-budget filmmaker Ed Wood.

Lugosi has many fascinating moments. They include stories of his cinema rivalry with Boris Karloff, and the time Frank Sinatra visited the cash-strapped Lugosi at the hospital and helped pay his expenses. The two men had never met before.

In the book’s final panel, Lugosi rests uneasily in his coffin, seemingly ready to spring into consciousness. “Perhaps I am immortal,” he muses. In a manner of speaking, he was.

Shadmi’s deeply absorbing and moving biography will appeal to Dracula afficionados of all ages.