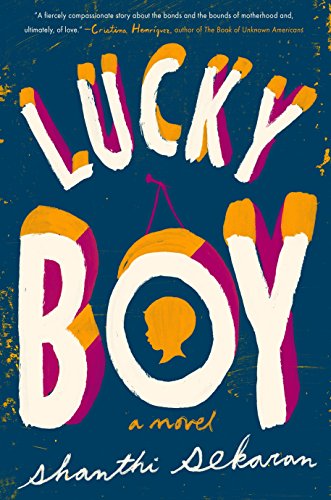 “Nonfiction wrapped up in fiction, academic arguments presented as stories. Sekaran has admirably shown us all sides without bias.”

With the current elections, the fate of the U.S. immigration policy hangs in the balance. What will happen to undocumented workers? What will happen to their American born children, also known as Dreamers? There’s a lot of speculation out there from the academic and political side, but fewer scenarios dominate the fiction world. Lucky Boy fills this vacuum well.

At its heart, Lucky Boy is an immigration story. On one side is Solimar, affectionately known as Soli. She lives in the dirt-poor town of Popocalco in Mexico, where the Santa Clara is the patron saint of television and eye disease, and everybody is in a rush to leave.

Soli is no different, and she dreams of going to America to work, to make a better life for herself, and send home money to her old parents so that they can build a nice house and have nice things. Soli isn’t aware of the politics, nor does the illegality of her plan bother her. All she knows is that she is poor, and to escape from poverty she must escape over the border.

On the other side are an Indian American couple Kavya and Rishi Reddy, who have been trying for years to get pregnant. They are well-to-do, living in Berkeley in stylish comfort, worried about a childless future. All the stereotypically hilarious idiosyncrasies of Indian families revolve around them, sending home the message that while this couple is American, they are also different. They are the new, emerging face of America, their success fed with capitalism and immigration.

Soli’s journey takes her through treacherous Mexican ground, where she encounters thieves and rapists, and also a charismatic young man who she falls in love with. Only after she enters the U.S. does she find out that she is pregnant, and by then it is too late. One’s need to survive is always foremost. We read about her struggles as she adapts to a new country, finds a job as a housekeeper, learns English. It is no surprise that she too, is now in Berkeley, just like the Reddys.

Soli’s path toward motherhood is paralleled with the Reddy’s realization that they must adopt or foster a child if they want to become parents. Both narratives are equally fascinating: full of hope and passion one minute, worry of the unknown future the next. Both narratives are told with a sense of impending doom, as if Sekaran is reminding readers of the transient nature of their journeys. Anything can change at any minute, and it does.

A few months after the birth of Soli’s son Ignacio, she is arrested and jailed. Ignacio is taken into the foster system, where he is finally taken in by Indian American parents by the name of Kavya and Rishi Reddy. This isn’t a big surprise to the reader, because it seems as if everything in the book has been leading up to this minute. The couple make Ignacio their own, and as Soli faces abuse and hopelessness in a detention center, the Reddys find love in their new son.

In the middle of both stories is the role of the government, in the form of social services. They must grapple with the decision to either give Ignacio back to his birth mother and send her to to Mexico, or give custody to the Reddys, who are legally American, as is the little boy they love. Nonfiction wrapped up in fiction, academic arguments presented as stories. Sekaran has admirably shown us all sides without bias.

To tell the rest of the story will be doing an injustice to prospective readers. There are so many questions, many of which remain unanswered in real life as well. Will Soli ever be released from the detention center? Will she be sent back to Mexico? What will social services decide about the fate of her son Ignacio, who is also now the Reddy’s son? All these questions reverberate in readers’ minds, and the solving of them is a delicious journey itself.

As pages are turned, we discover how mothers have superhuman strength to protect their babies, and how motherhood comes not only from a physical body connection but from fostering and adopting and so much more. There is no right or wrong answer, only the story of Soli, Kavya, and Rishi, all of whom want Ignacio, the Lucky Boy.

Lucky Boy is not just a story, but it is a roller coaster ride full of emotion. Kavya’s love for her foster child is as passionate as a birth mother’s. Yet she is constantly aware that he may be taken away from her at any time. Ironically, Soli has already had this fear realized, and the loss of her child gnaws at her like an open wound. Even detached parties, like Kavya’s rigid Indian parents, and Rishi Reddy himself—who cannot feel the emotions of a father for another man’s son—finally come around when Ignacio enters their lives.

By far the most amazing character of this novel is Soli, who shows us how to find strength and courage in the face of the biggest and most troubling adversity. Her story is the story of the real-life undocumented workers who risk everything to make a better future for their children. Kudos to Sekaran for tackling this difficult subject.