Luck and Circumstance: A Coming of Age in Hollywood, New York and Points Beyond 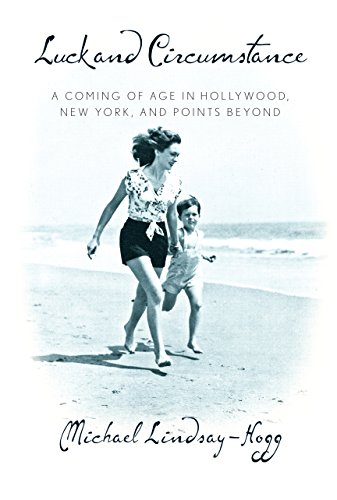 “Had the reader the gift of reading between the lines, he no doubt would find a great deal to love in Luck and Circumstance. . . . [But] in this most evasive—if elegantly written—memoir, there is a limit as to what will be shared.”

Author Truman Capote once rather famously quipped, “A conversation is a dialogue, not a monologue. That's why there are so few good conversations: due to scarcity, two intelligent talkers seldom meet."

Michael Lindsay-Hogg, son of Hollywood, noted film and television director in his own right and author of Luck and Circumstance, is obviously familiar with the quote, and agrees, in that he so seldom finds a talker with a gift for conversation equaling his own.

This perhaps accounts for the lack of conversations conjured in his memoir, subtitled A Coming of Age in Hollywood, New York and Points Beyond. Indeed, in our author’s hands, memory is an endless monologue loosed upon the page, at times highly entertaining, and at other points irritating almost to the point of apoplexy—beginning with the title itself, a rather witless title that causes the reader to wonder, after working his way through the memoir in question, if Michael Lindsay-Hogg settled for Luck and Circumstance only because “pomp” had already been taken.

The reader reminded himself often while working his way through the assorted memories of the “coming of age” of Michael Lindsay-Hogg that a certain reserve seemingly forbidding a “tell all” comes naturally to the author. His mother was the wonderful, understated actress Geraldine Fitzgerald, perhaps best known for playing Bette Davis’ confidant in Dark Victory, and Edward Lindsay-Hogg, an English gentleman of the sort who, when revealing why he asked his then-fiancée to marry him wrote, “Geraldine is a dear girl, and I am very fond of her.”

It then perhaps should come as no surprise to the reader that in his memoir Michael Lindsay-Hogg tends to reveal to walk a tightrope between candor and reserve—and to ultimately hide more than he reveals.

This might well be an admirable quality in life, as loyalty to family and friends often dictates a closed mouth, but it is rather a handicap for the memoirist. And the reader comes away bewildered, both by what the author has chosen to elide from his narrative and by what he rather rudely shares. (Suffice it to say that, in my opinion, Gloria Vanderbilt has never done anything to deserve the mention she gets here.)

For example, well into the memoir, the author treats his reader to an “Interlude” in which he deals with the many and varied sexual experiences that the has enjoyed in his life. But he does it so very coyly, by briefly describing them without identifying them: “The Belgian, the nightclub girl, the wife of a family friend, an art student, an actress, another actress, a magazine editor, a stage manager, my cousin’s ex-wife,” etc. Just as coyly, he reveals why he never became a homosexual (bristles) and why he was unable to change the preferences of a lesbian with whom he was once enamored (it had to do with who preferred licking what).

But just as the reader comes away from this “Interlude” perhaps entertained, he in no way feels that he has gotten to know the author, as the memoir has a feel of a retread about it, as if it were merely an accumulation of anecdotes that had been told many, many times before. (Such as when the wonderful Tammy Grimes comes up to a young Michael Lindsay-Hogg at his very first swanky Manhattan theater party and asks, “Is it true that Orson Welles is your father?)

The reader feels, upon concluding the memoir, that he has just interviewed Mr. Lindsay-Hogg and that, throughout the interview, while he managed to pull forth some standard, wry stories, he never managed for a moment to get to the real truth of anything—and that the results, therefore, are tepid at best.

Which is not to say that the entire book reads like a transcript of a wine-soaked dinner table monologue. Two people in the author’s experience transcend the censorship of memory—his mother, Geraldine Fitzgerald, who emerges as a conflicted artist and whose need for recognition and respect was somewhat overshadowed by her inability to overcome her own fear and self-doubt; and theatrical genius/enfant terrible Orson Welles. Indeed, if anyone, it is Welles’ rather mysterious relationship with the author that is the heart of the book.

As Michael Lindsay-Hogg remembers it, in the winter of 1955, his mother agreed to play Goneril in a production of King Lear that Welles was to direct and play the lead role. Because she knew that her son had a great interest in a life in the theater, she asked Welles if her son could attend rehearsals. He agreed, and the author writes of meeting Orson Welles:

“He was glorious at that time, forty years old, tall, broad, dressed in black, starting to be heavy but not nearly with the weight which must have partly killed him. A big head with glossy dark hair, alert amused brown eyes under the broad forehead, with his enveloping, welcoming seductive voice. But there was something else to him, a kind of emanation of energy and intelligence, curiosity, and originality.

“Day after day, I sat there watching the play as it developed, as Orson shaped scenes and marshaled the crowd of soldiers and courtiers. He’d catch my eye often, winking sometimes, sometimes a smile. Or, if one of the actors, was not doing a good job, he’d look at me and roll his eyes.”

Of that rehearsal period and of his growing relationship with Welles, the author continues:

“Soon after, the company moved onto the stage at the City Center to rehearse at night. Orson was prowling the unlit orchestra watching the bright action onstage where a stand-in was going through King Lear’s moves and reading the lines. As he passed behind the seat I was sitting in, my left arm over the seat beside me, Orson stopped.

“I felt a quick aware tension with him behind me, unmoving in the dark.

“A moment. Then, as if to clarify his presence, he laid his right hand on my shoulder and squeezed it, kneading it twice, the second pressure stronger than the first, and then he continued on.

“I was not used to being touched by male family members. My stepfather had taught me how to shake hands and look the other person in the eye, but he had not been brought up to be a hugger of males, and this was in the middle of the five-year period when I was not to see Edward Lindsay-Hogg at all.

“I supposed I longed for a father.

“I felt, if it had been my bare shoulder, I wouldn’t have ever washed his touch off.”

Jump ahead a bit and you get to that cocktail party and Tammy Grimes, then wife of Christopher Plummer, cornering the young Michael Lindsay-Hogg:

“We talked a bit about this and that. Did I like Oxford? And then, in her beguiling throaty voice, Tammy asked, ‘Is it true that Orson Welles is your father?’

“’It’s just what I’ve heard. What people say. And you look like him.’”

And so, with this simple exchange begins the topic that will reoccur most often in this memoir—if indeed “reoccur” is the word for a topic, like a rock skipping the surface of a lake, touching down rather erratically and without rhyme nor rhythm nor warning.

And so Orson Welles wanders in and out of this pastiche of memories, appearing without warning in a restaurant in which Mr. Lindsay-Hogg is dining with longtime love actress/author Jean Marsh (and would that our author had given us much more information about her—in these pages she most often appears sitting on the bed drinking tea), and, in another cameo moment, has his secretary call Lindsay-Hogg to invite him to dine with Welles and actress Marlene Dietrich. When word passes to Welles that Lindsay-Hogg had to decline because of an evening rehearsal, the auteur seemingly disappears in a huffy puff of cigar smoke—and is not heard from again for four years.

The dynamic friction created by the question of our author’s paternity gives the book its best moments, including the many and varied answers that Geraldine Fitzgerald gives to her son and his simple question: “Is Orson Welles my father?”

But Michael Lindsay-Hogg seems unwilling to give over the entirety of his memoir to his search for the answer to his question (the answer comes, in time, sort of)—no, the bulk of the book is given over to a rather cagey recounting of the author’s work history, one that is rather skimpy of the details:

“Within eighteen months, driven by ambition, cushioned by innocent optimism, having learned guile and been blessed with luck, I was at the age of twenty-four directing the premier English TV rock ’n’ roll show, ‘Ready Steady Go!’”

(To this the reader responds that, while it’s great that he had this experience—and, indeed, his having it allows for numerous anecdotes about The Rolling Stones, The Beatles, and, in one memorable tale, Yoko Ono—the reader cannot help but suspect that there must be some story involved as to how an actor/stage manager in a small Irish theater company makes such a leap so quickly and easily. . . .)

Once he has decided that he prefers directing to his early interest in acting, the tale becomes a recounting of successes and failures, from “Brideshead Revisited” (most obviously a success) to Nasty Habits (the film version of Muriel Spark’s The Abbess of Crewe, with Glenda Jackson—a mixed blessing, at best) to The Rolling Stones Rock and Roll Circus (a curiosity, but a failure as well). Most major projects are apportioned out a chapter, in which our author shares with us his experiences—all well and good.

But then we get to this:

“And then it was 1985. As the Public Theater, Joe Papp producing, I’d directed the first production of Larry Kramer’s theatrical hand grenade The Normal Heart, which took on the early days of the AIDS crisis.”

Scanning this, the reader sits up, fully alert. Joseph Papp? Larry Kramer? The Normal Heart? The reader prepares himself for a very, very good chapter. But what he reads is this:

“The doing of The Normal Heart would be a small book in itself.”

Flipping ahead does no good. This is the author’s last word on the topic.

Leaving the reader asking: Where exactly is that small book, Mr. Lindsay-Hogg?

Had the reader the gift of reading between the lines, he no doubt would find a great deal to love in Luck and Circumstance. In having to deal with the things shared on the page, however, and, even more important, with the things that have been withheld, the reader can report something of a draw in the struggle between himself and the author.

Quick memories of moments in time attain the sublime—particularly those dealing with the dry ache that arises from the question of paternity and the author’s boyhood need for a strong, loving father—but just as many moments fall flat, as the author once more rather grandly raises his hand to his lips, shushing himself with a rather taunting smile, letting his reader know that in this most evasive—if elegantly written—memoir, there is a limit as to what will be shared.