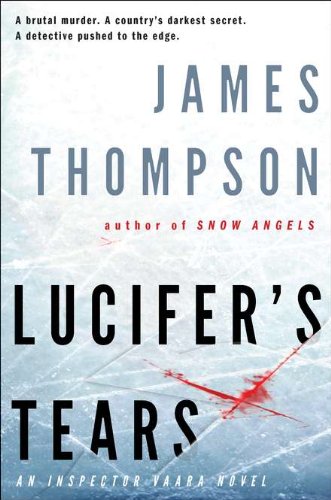 While Scandinavian writers seem to have taken over the crime genre these past few years, one crime writer has surpassed them, and he’s not Scandinavian. American James Thompson, now living in Finland, is the crime writer gaining major recognition and plaudits from critics and fans alike, after his critically acclaimed and bestselling Snow Angels mesmerized and terrified readers in equal measures last year. Adding to its accolades Snow Angels received an Edgar nomination for Best First Novel from the Mystery Writers of America, immediately making it a must-read, must-have book.

Lucifer’s Tears is the second Inspector Kari Vaara novel, and like its predecessor it grabs you from the very first page, refusing to let go until the very end. Vaara has moved from the Arctic Circle to Helsinki, having requested a new assignment following the personal trauma and collateral damage of the nightmarish Sufia Elmi case (Snow Angels), the previous year. The Sufia Elmi case left Vaara with a scarred face, chronic insomnia and ubiquitous migraines.

Now, a year later, he’s working the graveyard shift in the homicide unit, terrified that his heavily pregnant American wife, Kate, will miscarry again after losing twins just after Christmas.

Vaara is investigating the murder-by-torture of a woman, Iisa Fillipov, the philandering wife of influential Russian businessman, Ivan Filippov. Iisa’s secret lover, Rein Saar, is the chief suspect in the murder, claiming to have discovered Iisa’s mutilated body beside him, when he awoke from sleep. Saar also claims to have been knocked unconscious. Vaara’s superiors order him to find evidence to prove Saar’s the murderer, but Vaara notices irregularities that lead him to believe the powers-that-be may well be protecting Ivan Filippov. Unfortunately for Vaara, Filippov has what seems to be an airtight alibi: he was partying with the national chief of police at the time of the Iisa’s death.

Parallel to this, Vaara is also asked to investigate an alleged war criminal, a Finnish national hero, ninety-year-old Arvid Lahtinen, who allegedly executed Jews and other POWs at a secret Finnish prisoner-of-war camp during WWII. But Vaara soon learns that not only did his own beloved grandfather serve in the same unit as Lahtinen, but that the POW camp is just one of the wartime secrets Lahtinen is hiding that are potentially embarrassing to the Finnish government. The Interior Minister demands a conclusion of innocence, and to cover up any trails that may lead to affirmation of Lahtinen guilt, thus preserving Finland’s heroic perception about itself and its role in the war.

Vaara is the kind of man who first and foremost must always seek the truth, no matter the cost or final outcome of that truth, even though along the way it may forever tarnish his memories of a beloved grandfather. It’s not too long before meaty and bloody worms start crawling out of this can opened by Vaara, all over his hands . . .

Mr. Thompson’s ability to craft complex plot/sub-plots with such powerful prose makes him unique in the family of modern-day crime writers. Startlingly original and instantly cinematic, Lucifer’s Tears unfolds in page-turning addictiveness until it delivers shock after shock in its denouement of police corruption and condemnation for those trying to rewrite history.

It’s going to be tough for other crime writers to beat this as Thriller of The Year. Grab yourself a copy now and see why.